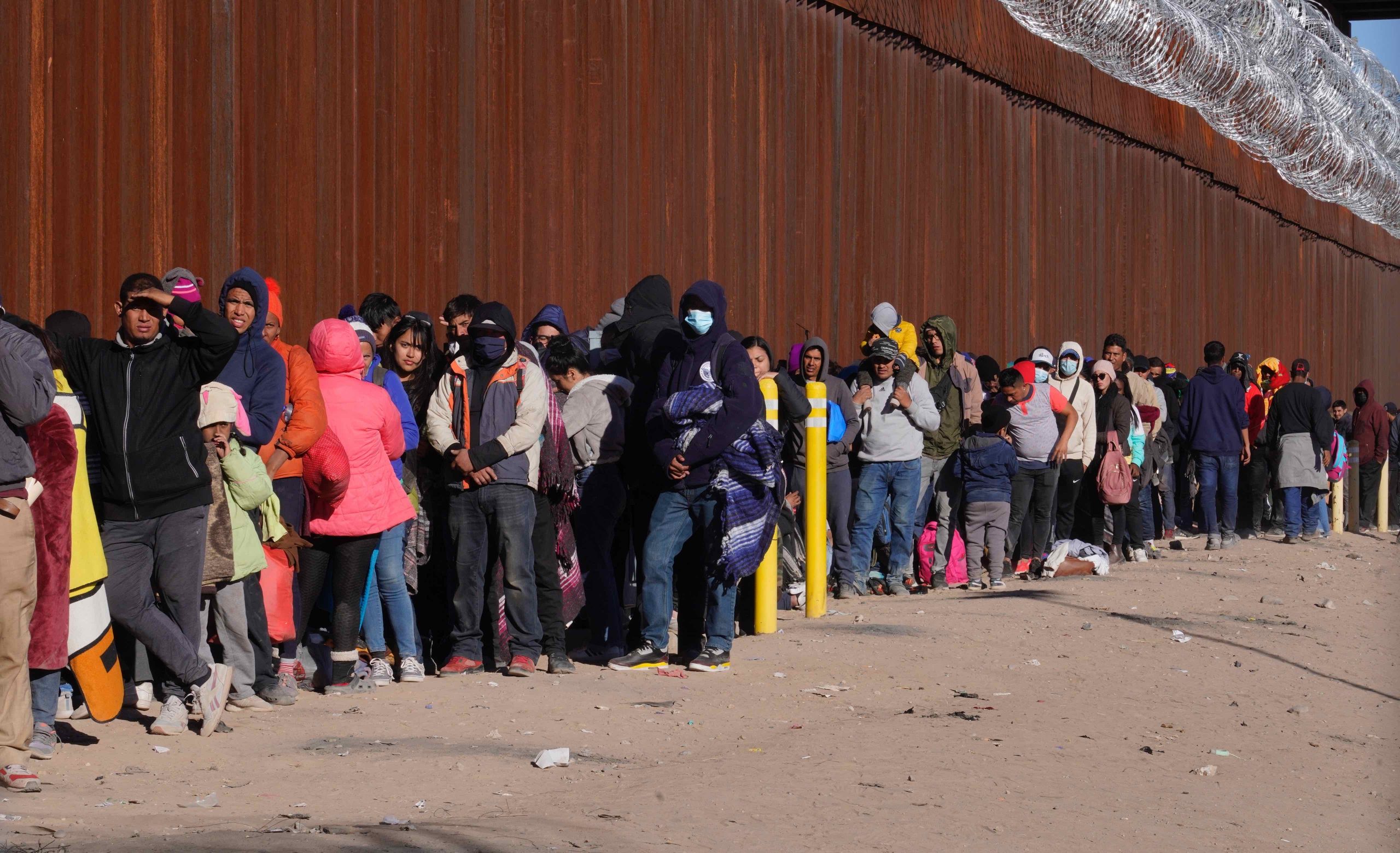 Migrants seeking asylum line up at the U.S.-Mexico border in El Paso, Texas, on Dec. 21. (Ruben2533 via Shutterstock)
Share

The Supreme Court on Tuesday blocked a federal judge’s ruling that had ordered the government to end a Trump-era border policy that allows immigration officials to quickly turn away migrants seeking asylum. The justices agreed to hear argument in late February or early March on whether 19 states with Republican attorneys general can step in to defend the policy against a challenge by migrant families.

U.S. District Judge Emmet Sullivan had directed the Biden administration to end the policy this month, but the court’s brief, unsigned order put Sullivan’s ruling on hold and effectively kept the so-called Title 42 policy in place for now. The vote was 5-4. In a dissent joined by Justice Ketanji Brown Jackson, Justice Neil Gorsuch lamented the majority’s decision to step in. He stressed that although he did not “discount the States’ concerns” about the growing number of migrants at the southern border, the justices are “a court of law, not policymakers of last resort.”

Justices Sonia Sotomayor and Elena Kagan indicated that they, too, would have allowed Sullivan’s ruling to remain in effect, but they did not join Gorsuch’s dissent.

The federal law at the center of the case – known as Title 42 of the Public Health Services Act – gives the Centers for Disease Control and Prevention the power to bar the entry of individuals into the United States to protect the public from contagious diseases, even if those individuals otherwise would be eligible to apply for asylum or other forms of humanitarian relief. At the beginning of the COVID-19 pandemic, the Trump administration relied on Title 42 to suspend the entry of migrants at the Mexico and Canada borders.

Meanwhile, in a separate case in Washington, D.C., Sullivan ruled that the policy itself is illegal, and he ordered the government to end it. At that point, the states with Republican attorneys general tried to intervene in the D.C. case, hoping to defend the lawfulness of the policy and reverse Sullivan’s ruling on appeal.

After the U.S. Court of Appeals for the District of Columbia Circuit rejected the states’ request to join the case, the states came to the Supreme Court on Dec. 19, asking the justices to keep the policy in place. They told the justices that if the court did not block Sullivan’s order, it would “cause a crisis of unprecedented proportions at the border.”

The Biden administration conceded that ending the policy “will likely lead to disruption and a temporary increase in unlawful border crossings.” But the answer to that problem, U.S. Solicitor General Elizabeth Prelogar argued, is to rely on federal immigration laws, rather than “a public-health measure that all now concede has outlived its public-health justification.”

The migrant families who are challenging the policy contended that the states’ support for the policy is not motivated by concerns about COVID-19. Indeed, they pointed out, 12 of the states seeking to join the dispute recently argued in the Supreme Court, in a challenge to the Biden administration’s student-loan forgiveness program, that “COVID-19 is now irrelevant to nearly all Americans.”

The families called the policy’s human toll “devastating.” It has forced, they said, migrants “to ‘walk the plank’ into the waiting hands of cartels and others ready to abduct and exploit them.”

While granting the states’ request to put Sullivan’s ruling on hold, the justices fast-tracked the case for oral argument during the court’s February argument session, which runs from Feb. 21 to March 1. The court directed the states, the Biden administration, and the families to focus their briefs on whether the states can intervene to challenge Sullivan’s ruling. Although the substantive merits of Sullivan’s ruling are relevant to the intervention question, the court stressed, the justices will only weigh in on intervention. That procedural issue is similar to one raised last term in Arizona v. City and County of San Francisco – another dispute over a Trump-era immigration policy that the Biden administration sought to revoke but that red states fought to retain. The justices dismissed that case without resolving the question about state intervention.

In his dissent from Tuesday’s order, Gorsuch was skeptical of what the court expects to accomplish by expediting the dispute over intervention. The states, he wrote, “may question whether the government followed the right administrative steps before” attempting to end the Title 42 policy. “But they do not seriously dispute,” Gorsuch continued, that “the public-health justification undergirding the Title 42 orders has lapsed.”

“The only plausible reason for stepping in at this stage,” Gorsuch concluded, is the states’ concerns about a surge of migrants at the border if the policy ends. “But the current border crisis is not a COVID crisis,” Gorsuch emphasized. “And courts should not be in the business of perpetuating administrative edicts designed for one emergency only because elected officials have failed to address a different emergency.”