What senators are saying: Tracking reactions to Jackson’s nomination 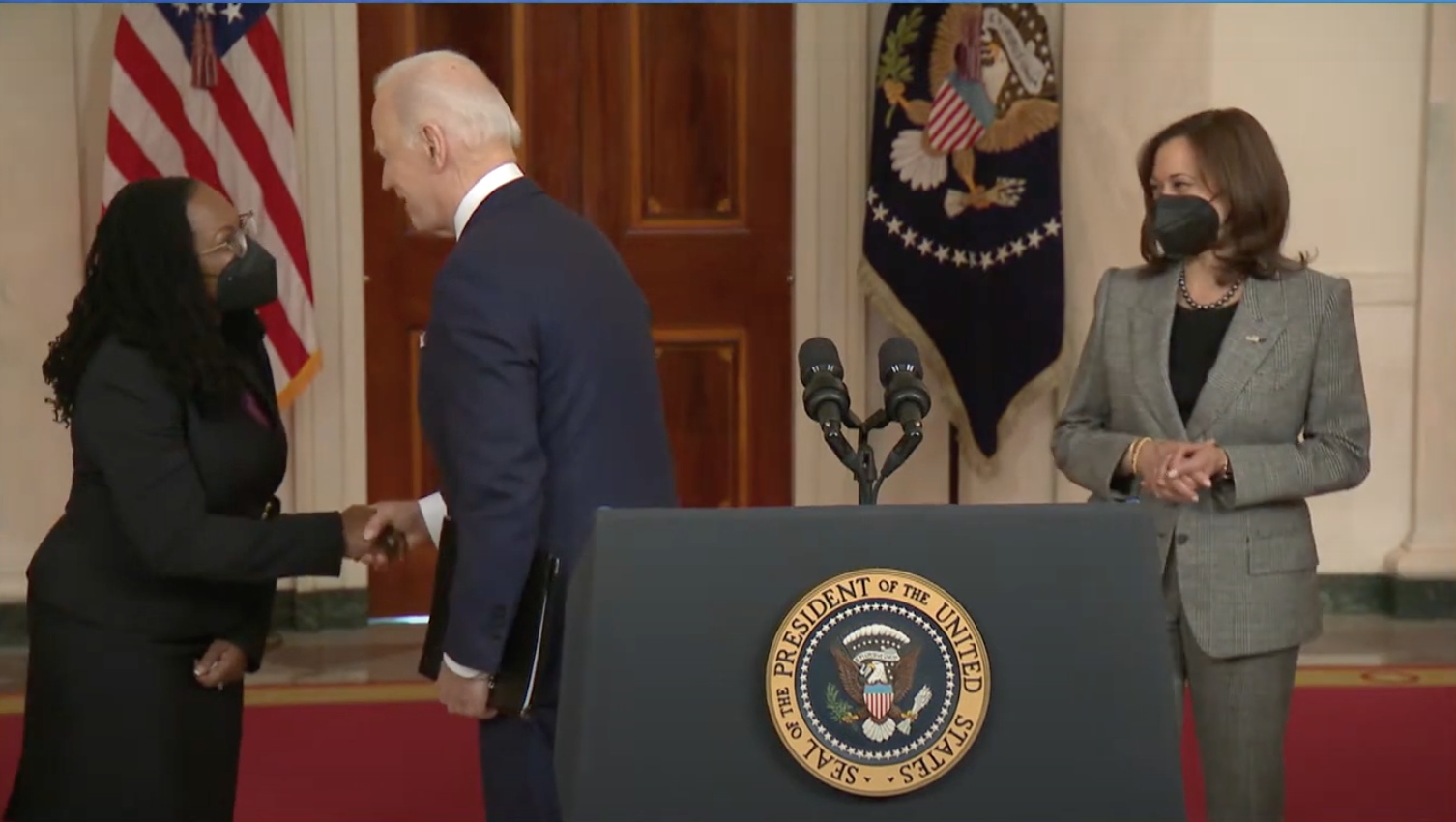 Judge Ketanji Brown Jackson will need a simple majority vote in the Senate to be confirmed. (Screenshot from White House video)
Share

After President Joe Biden’s nomination of Judge Ketanji Brown Jackson, attention now turns to the Senate’s advice-and-consent process. It takes a simple majority in the Senate to confirm a nominee to the court. The chamber is split 50-50, with Vice President Kamala Harris able to cast the decisive vote in the event of a tie.

Here’s how senators from both parties reacted to the nomination on Friday.

Two moderate Democrats – Kyrsten Sinema of Arizona and Joe Manchin of West Virginia – frequently hold the pivotal votes in the Senate, and they have shown willingness to block Biden’s legislative initiatives. Neither Sinema nor Manchin, however, has voted against a single one of Biden’s judicial nominees for the lower courts. Both issued non-committal statements on Friday about Jackson’s nomination.

Sinema said she looks forward to meeting Jackson, adding that she evaluates all judicial nominees based on their professional qualifications, their belief in an independent judiciary, and whether they would uphold the rule of law. “I take seriously my constitutional duty to provide advice and consent,” she said.

Manchin issued a similar statement, saying he would assess Jackson’s “record, legal qualifications and judicial philosophy to serve on the highest court in the land.”

I look forward to meeting with Judge Jackson before determining whether to provide my consent.

Last June, three Republican senators joined all 50 Democrats in voting to confirm Jackson to the U.S. Court of Appeals for the District of Columbia Circuit. Those three Republicans are Lindsey Graham of South Carolina, Susan Collins of Maine, and Lisa Murkowski of Alaska.

Graham publicly lobbied Biden to nominate J. Michelle Childs, a district judge from his home state of South Carolina. Graham (as well as Rep. Jim Clyburn, D-S.C.) said Childs would bring much-needed educational diversity to the court because she attended public universities. Shortly after news broke that Biden had selected Jackson (who has undergraduate and law degrees from Harvard), Graham tweeted that “the radical Left has won President Biden over yet again.” “The Harvard-Yale train to the Supreme Court continues to run unabated,” he added.

If media reports are accurate, and Judge Jackson has been chosen as the Supreme Court nominee to replace Justice Breyer, it means the radical Left has won President Biden over yet again.

The attacks by the Left on Judge Childs from South Carolina apparently worked.

Collins released a brief statement: “Ketanji Brown Jackson is an experienced federal judge with impressive academic and legal credentials. I will conduct a thorough vetting of Judge Jackson’s nomination and look forward to her public hearing before the Senate Judiciary Committee and to meeting with her in my office.”

Murkowski released a similar statement on Friday afternoon, adding: “I’ve been clear that previously voting to confirm an individual to a lower court does not signal how I will vote for a Supreme Court justice. I am committed to doing my due diligence before making a final decision on this nominee. Being confirmed to the Supreme Court — the nation’s highest tribunal, and a lifetime appointment — is an incredibly high bar to achieve.”

Before the full Senate votes on Jackson’s nomination, the Senate Judiciary Committee will examine her record and question her over several days of hearings. Here’s what some members of the committee have said: