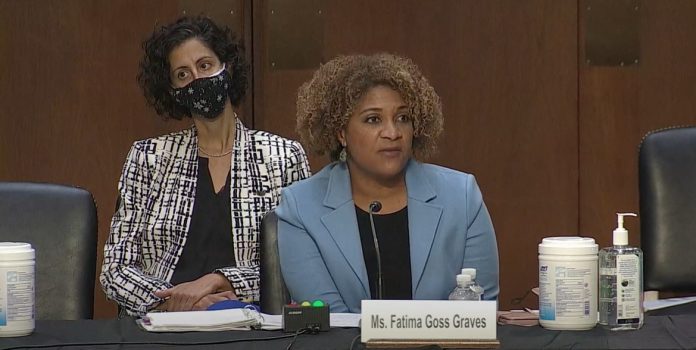 Fatima Graves of the National Women's Law Center speaks at a Senate Judiciary hearing on the shadow docket.
Share

Democratic senators argued Wednesday that rulings on the Supreme Court’s “shadow docket” are inconsistent and overly politicized. Republicans called the shadow docket ordinary and said the term itself is designed to make the court’s emergency orders seem nefarious. The debate took place at a Senate Judiciary Committee hearing in light of the court’s decision earlier this month refusing to grant emergency relief to groups challenging Texas’ law that bans nearly all abortions.

“If you can upend our constitutionally protected right to abortion in a one-paragraph opinion, where does it end?” Fatima Graves, president of the National Women’s Law Center, testified at the hearing. She was referring to the court’s Sept. 1 order that declined to block the Texas law, with the five-justice majority citing “complex and novel” procedural issues.

The shadow docket is the informal term for expedited rulings that the Supreme Court issues outside its typical process of hearing arguments and handing down lengthy opinions. In February, when a panel of the House Judiciary Committee held the first-ever congressional hearing on the topic, Democrats and Republicans agreed that the court should be more transparent with significant rulings on the shadow docket. Wednesday’s Senate hearing did not demonstrate the same bent for consensus.

As SCOTUSblog has noted, the shadow docket’s importance has escalated over the past four years. The court has increasingly used short, unsigned emergency orders to intervene in high-profile litigation before lower courts issue their rulings. These orders often do not explain the court’s reasoning or indicate how each justice voted. Critics say the court uses the shadow docket inconsistently, intervening aggressively when, for instance, religious rights are at stake but declining to intervene to protect abortion rights in Texas.

In his official testimony, legal expert Stephen Vladeck explained that the court has issued seven emergency writs of injunction since November 2020, before which the court had issued only four emergency injunctions since Chief Justice John Roberts’s 2005 confirmation.

Vladeck, a law professor at the University of Texas, focused Wednesday on the increasingly direct and permanent impact these rulings are having on state and federal law. Previously, he said, shadow-docket rulings primary dealt with narrow and temporary adjustments for particular litigants.

The lack of clearly explained reasons for some shadow-docket decisions, Vladeck said, shakes the court’s legitimacy and has “troubling implications for the rule of law.”

Republican senators focused broadly on abortion and narrowly on the term “shadow,” which they saw as an effort to politicize or even threaten the court.

“Shadow docket, that is ominous. Shadows are really bad, like really, really bad,” Sen. Ted Cruz, R-Texas, said. Other Republicans repeatedly called the use of the word nefarious, and Sen. Tom Cotton, R-Ark., employed air quotes around the term.

“Shadow docket” was coined in 2015 by University of Chicago Law School professor William Baude, a former clerk for the chief justice. Republican witnesses and senators used phrases such as “non-merits docket” or “emergency proceedings” throughout the hearing instead.

Witnesses for the Democrats focused on the consequences of the court’s decision in the Texas case over the past month, with particular focus on the disparate impact of the law on low-income people and people of color. “It’s day 29 and many people wake up in Texas wondering about what options they have,” Graves said.

The two Republican-invited witnesses focused on judicial procedure and were called on proportionally little compared to the other witnesses. Edmund LaCour, the solicitor general of Alabama, called the Texas ruling “entirely ordinary” and emphasized the importance of an emergency docket in judicial functioning.

“It’s not about the fact that we need an emergency docket,” Vladeck later responded. “There’s not a lawyer out there who would dispute that. It’s that what the court is doing is having greater impact in ways that are inconsistent.” The Texas case, he said, must be looked at against the backdrop of the increased number of cases where the justices did intervene.

Pointing to the structure of the case, Jennifer Mascott of the George Mason University Antonin Scalia Law School said that the court did not intervene because the challengers did not identify any appropriate party for the court to issue an order against. The Texas law removes state officials from this role by placing the responsibility of enforcing the law on individual citizens, who may sue anyone who assists in providing an abortion after about six weeks of pregnancy. She said the shadow docket has received more attention recently because of “a well marketed, smart law review article coining the edgy phrase” by Baude.

“Here, with the Texas law, the Supreme Court likely lacked jurisdiction at this time,” Mascott said. Vladeck, who spoke next, noted that “it’s the Supreme Court, not state legislatures, that gets the final word as to what the constitution protects. And it’s the court’s obligation to do so through principled decisions that adequately and consistently explain themselves.”