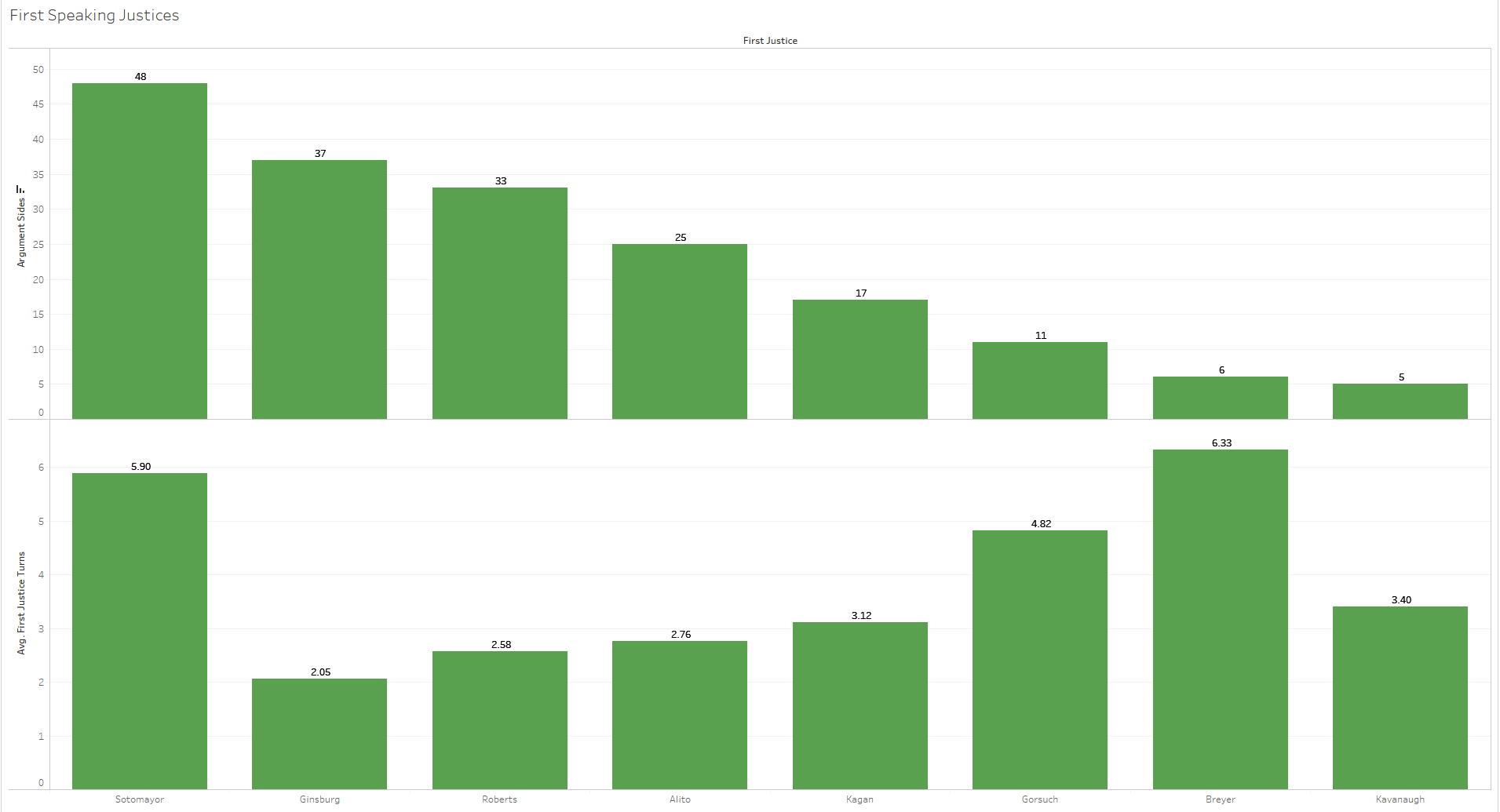 Oral arguments for the 2018 term are now complete. In a term in which we have the potential to see heightened polarization on the Supreme Court, oral arguments are affected as well. Last term, all 5-4 decisions made across ideological lines ended in conservative victories. So far this term Justices Samuel Alito, Clarence Thomas, Neil Gorsuch and Brett Kavanaugh have all been in the majority in all but one of the court’s 5-4 decisions (In Washington State Department of Licensing v. Cougar Den Inc., Gorsuch joined the more liberal justices in the majority. In addition, in Madison v. Alabama, a 5-3 decision argued before Kavanaugh joined the court, Roberts joined the liberal justices in the majority.).

Oral arguments shed light on the interaction among justices in a unique way. They are the only times when we can see and hear the justices work through case materials and seek answers to a variety of questions. They also are the only time that the parties’ attorneys directly interact with the justices. These multiple layers of interaction yield novel insights into the court’s current dynamics.

Because oral arguments are limited in duration, time that is focused on any particular individual’s interests is always at a premium. Justices have the opportunity for counsel to answer their specific questions and to illuminate particular areas of inquiry that may not have been sufficiently resolved through the case’s briefs. Since the Supreme Court’s liberal minority is obviously at a voting disadvantage in ideologically polarizing cases, one way they still might attempt to gain some leverage in cases is through oral arguments. The first justice who speaks in an oral argument gets to set the initial tone for the argument and to specify the court’s opening line of questioning. Because justices tend to follow up on their own questions, prolonged dialogues between the first speaking justice and the arguing attorney sometimes occur.

This term, the Supreme Court’s liberal justices often spoke first and held the floor after attorneys began an argument. The first figure shows the number of times a justice spoke first after an attorney’s opening statement in an argument and the number of talking turns the justice took on average before another justice interjected. This looks separately at each attorney — petitioner, respondent and amici – in an argument, but excludes petitioners’ rebuttals. 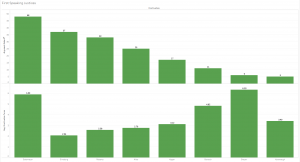 Sotomayor was the first speaking justice in more arguments than any of the other justices. She also engaged these attorneys to quite a degree by averaging 5.9 talking turns before a second justice jumped into an argument. Ginsburg, who is often one of the more reticent justices at oral argument in terms of total words spoken (speaking only about eight percent of the total words from all justices last term), spoke first among the justices in the second most arguments after Sotomayor with 37.

Sotomayor not only spoke first in arguments most frequently, but she also had the most arguments in which she took at least eight talking turns before another justice began speaking. 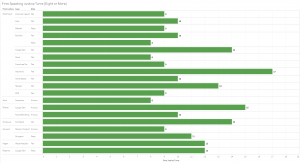 These instances, which show the most consecutive talking turns a justice took in an argument before another justice began speaking, reflect that Sotomayor had the most overall repeat turns in U.S. v. Haymond during Eric Feigin’s argument with 17, and also that Sotomayor took the most opportunities of eight turns in a row or more in the aggregate with 12. All other justices had two instances at most of eight or more talking turns to begin an argument. 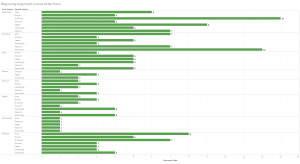 The other justices tended to have less variation in the number of times they followed particular justices. Roberts, for instance, followed Alito most at eight times and Ginsburg second most at seven times. Alito followed Gorsuch, Kagan, Kavanaugh and Sotomayor equally at five times each. These trends regarding the justices’ ordering of speaking give a sense of the justices’ oral argument techniques and how certain justices manage to maintain their lines of inquiry for prolonged portions of arguments.

Supreme Court oral arguments are and historically have been a male-dominated enterprise, especially with regard to the arguing attorneys. Women, for example, only made up about 18 percent of all the attorneys in arguments between the 2012 and 2016 Supreme Court terms. The 2018 term was much the same, as the figure based on relative attorney participation below shows. 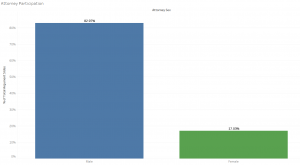 Because the attorney composition is so heavily weighted toward men, we might expect a similar distribution by justice for jumping first into oral argument depending on whether the arguing attorney is male or female. Although this is generally the case, there is some noticeable variation among justices. Another point encompassed in the next figure is how many words the justices let attorneys speak in their introductory remarks before they were the first to proceed with questions. The top part of the following graph shows the number and percentage of times a justice was the first justice to speak after male or female attorneys, and the bottom part shows how many words each justice let attorneys speak when the justice was first to interject, depending on whether the attorney was male or female. 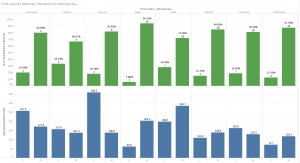 Breyer, Kavanaugh and Gorsuch each had limited opportunities as the first speaking justice and so their statistics are not very informative, although Kavanaugh and Gorsuch maintained close male/female divisions to the overall 83/17 percent baseline for interjecting after male or female attorneys. All three justices let female attorneys speak more words on average than men before jumping into the arguments.

Kagan was much more likely to jump in first after a male attorney than a female attorney, with 16 instances compared to one. Of the justices who frequently spoke first, Alito had the highest percentage of speaking first during a female attorney’s argument at 28 percent of the total opportunities he took. The other justices’ frequencies of interjecting depending on whether the attorney was male or female tended to be much closer to the actual difference in male and female attorney speakers for the term.

During the 2018 term, the liberal justices were trying to define their roles on this majority-conservative Supreme Court and to maintain some leverage over decision-making, even though they constitute a minority. Strategies at oral argument are one way this could be achieved, especially by setting the initial tone for the discussions during oral arguments.

We see that the gender disparity for attorneys at oral argument remains as much of an issue as ever. The justices had differential involvement early in oral arguments depending on whether the arguing attorney was male or female. Kagan and Sotomayor were much more likely to jump first into arguments with a male attorney, while Alito was the most likely on balance to jump first during a female attorney’s argument. Although not all of these behavioral choices are conscious decisions the justices make, they show some of the important differences that both ideology and sex may have played in the justices’ involvement in oral arguments this term.

An earlier version of this post indicated that Alito, Thomas, Gorsuch and Kavanaugh have been in the majority in all of the court’s 5-4 decisions so far this term; in fact, they dissented in Washington State Department of Licensing v. Cougar Den Inc. and all but Kavanaugh dissented in Madison v. Alabama, which was argued before Kavanaugh took the bench.