By the numbers: Update on OT11 and an updated Stat Pack

Pace of Opinions. The Supreme Court is well above its normal pace of opinions for the Term, having released 37 signed opinions and 7 summary reversals. Those opinions are also coming from an increasingly diverse set of authors; after his slow start to the Term, Justice Kennedy released five majority opinions during the last three weeks. The Court’s pace of opinions is all the more impressive because of the high percentage of divided cases. Up to this point in the Term last year, 37% of all decided cases featured at least one dissenting Justice. This year, 55% of cases – more than half – feature at least one dissent. 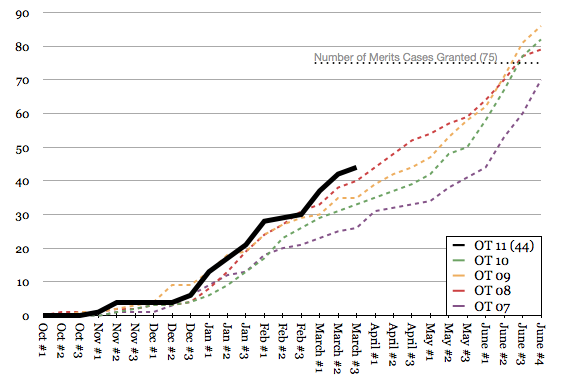 Among the cases decided, the Court has also released opinions at varying speeds. The cases decided most quickly have been Perry v. Perez, which was decided in only 11 days, and Greene v. Fisher, which was decided 28 days after oral arguments. The fastest divided case has been Smith v. Cain (63 days/8-1 decision) and the slowest has been Florence v. Board of Chosen Freeholders (173 days/5-4 decision). The fastest unanimous opinions have been Perez and Greene and the slowest has been Rehberg v. Paulk (153 days).

Pace of Grants. While the pace of opinions has been stronger than usual, the pace of grants has been more typical. The Court has granted eleven petitions for next year and held over another for rehearing (Kiobel v. Royal Dutch Petroleum Co.), putting the total number of opinions in line with rates from OT08 (13), OT09 (11), and OT10 (13). 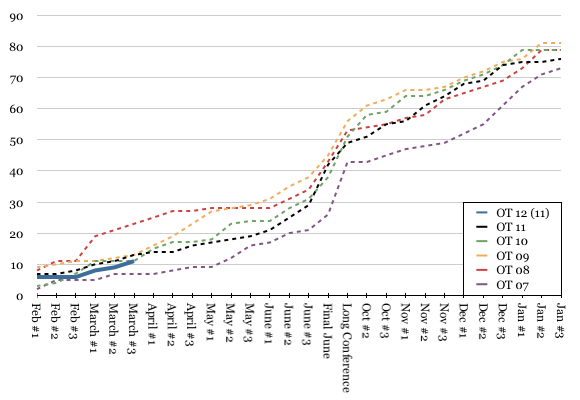 Stat Pack. Once again, we have compiled an update to our OT11 Stat Pack. This edition features updates to reflect all opinions and orders released to date. You can find it here.