Relist statistics OT 2017: The relist rest stop offers a golden ticket to some, becomes a holding pen and dead end to others 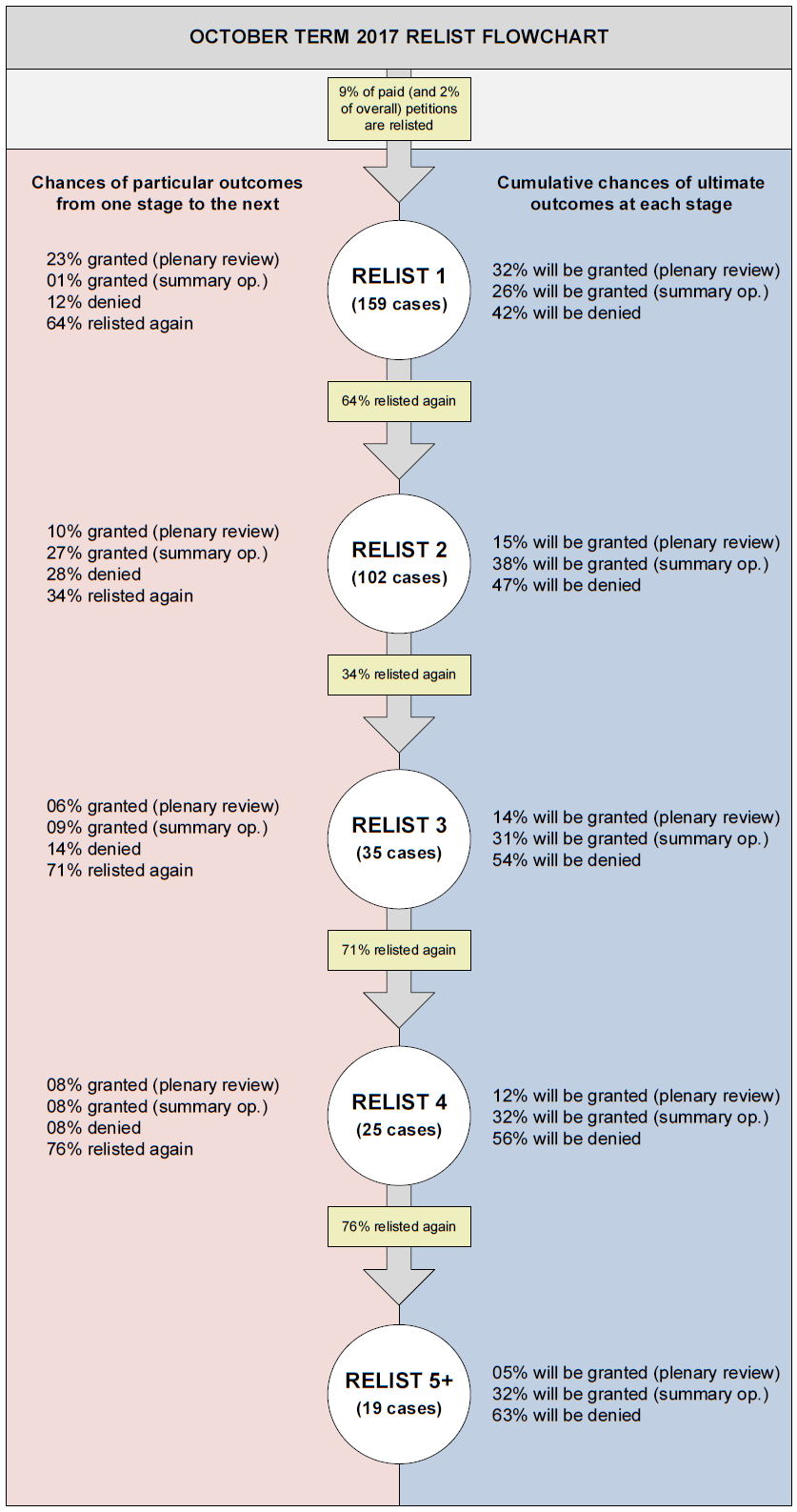 For four years running, we have pored over the prior term’s relists to give the readers of this blog a clearer idea of just what a relist means. When we began with this mind-numbing task after October Term 2014, a first relist meant that the ultimate odds of a grant were better than 50/50 — not bad when the average chance of a grant hovers around three percent. Being relisted continued to serve as a harbinger during the 2017 term, often signaling when the Supreme Court was interested enough in a petition to seriously consider granting it. But for all that relists still told court-watchers last term, the noise-to-signal ratio increased noticeably compared with previous terms. The increased noise appears to result from three related shifts in the court’s relist practice:

First, the number of relisted petitions increased to 159 in the 2017 term — up significantly from the 129 relisted petitions resolved in the 2016 term. (If you thought that nothing in the Supreme Court changes by 30 percent in a single year, you’d be wrong.) And that figure includes only those petitions that were disposed of during October Term 2017, omitting at least 26 petitions that were relisted during the 2017 term but remained pending as of the term’s end. So the justices appear to be a bit freer about relisting cases.

Third, the grant rate on relists was lower in OT 2017 than in previous years. A petition relisted once had a 32 percent chance of ultimately being granted in the 2017 term compared to a 43 percent chance in 2016 and a 49 percent chance in 2015. Interestingly, the inverse wasn’t true: While the chance of denial for relisted petitions climbed from 35 percent in 2015 to 45 percent in 2016, it fell slightly in 2017, to 42 percent. That’s due to an increase in the number of summary opinions. Indeed, if there is any good news here for relisted petitions, it is that for petitions that are relisted two, three or four times, the grant rate remained static from 2016 to 2017, but the rate of denial decreased as the court more often summarily reversed.

What does all of this mean? On the whole, the number of petitions relisted has increased, and the number of times that a petition is relisted twice has increased — so at any given time, there were many more relisted petitions on the docket in OT 2017 than in prior terms. At the same time, the overall number of cases granted has not increased commensurately. Sadly (for us more than anyone) that means that relists — while still effectively a prerequisite to a grant — have become a less reliable indicator that a case will ultimately be granted. So maybe the Relist Watch columns of yore got it about right in saying:

If a case has been relisted once, it generally means that the Court is paying close attention to the case, and the chances of a grant are higher than for an average case. But once a case has been relisted more than twice, it is generally no longer a likely candidate for plenary review, and is more likely to result in a summary reversal or a dissent from the denial of cert.

So why is the court relisting more petitions? One possibility is that it is relisting multiple cases that raise the same or related issues. For example, the court relisted at least four different cases — Allen, Gates, James and Robinson — each raising the identical question of whether sentence enhancements imposed under the residual clause of the then-mandatory sentencing guidelines’ career offender provision are unconstitutional. Those petitions were relisted repeatedly (some of them 10 times) before the court denied them all. Another example is Bormuth and Lund, cases on either side of a circuit split involving legislative prayer, and which the court either relisted or rescheduled 13 and 15 times respectively. (We are told by those who would know that rescheduling and relisting now serve similar purposes.)

In any event, now that the Supreme Court once again has a full complement of justices, we expect that there may be a brief flurry of grants from the ranks of the relists, at least once Justice Brett Kavanaugh has had a chance to settle in and review them. After that, it is possible the relist trends will continue to zigzag as another justice’s preferences affect relist practices. Relist Watch will keep monitoring, and we will report back next year. 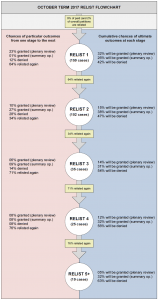 Thanks to Andrew Quinn for undertaking for a second year the daunting task of reading every Relist Watch to gather the data used in this article.