The statistics of relists, OT 2016 edition: Has the relist lost its mojo? Not quite

With the new term about to start, we thought it was time to look back and see what lessons we could learn from the relist statistics for October Term 2016. The big picture remains much as it has since the Supreme Court began relisting cases for OT 2014: Relists are an effective prerequisite for most plenary grants, in which a case is scheduled for briefing and oral argument, and still are an excellent predictor of eventual grants. But as we noted last year, the relist story is not static. Relists were less reliable predictors of grants for OT 2016 than for the prior two terms, and the dynamic for multiple relists was quite different this past term than it was during OT 2015.

Relists are, as they have long been, prerequisites to most plenary grants. Relists appear to be a mechanism for avoiding improvident grants by allowing the justices and their clerks to double-check for procedural or other obstacles to the resolution of a case on the merits, known as vehicle problems, before granting. Of the 75 plenary grants in OT 2016 (including consolidated cases), 71 percent had been relisted at least once. That is a bit lower than in OT 2015, when 77 percent of grants had been relisted, and lower still than in OT 2014, when 82 percent of cases were relisted. What to make of this reduced reliance on relists, if that is what it is, is hard to say. Perhaps the Supreme Court has become more confident in its ability to discern potential vehicle problems without multiple passes, or perhaps court personnel are just working faster. Perhaps the desire to avoid difficult cases while awaiting a replacement for Justice Antonin Scalia meant that the court looked for “easier” cases with fewer vehicle issues.

The reliability of relists as predictors for grants has gone down a bit. This term, virtually the same number of cases were relisted as last term, 122 for OT 2016 versus 121 for OT 2015. Of those, a petition with one or more relists was ultimately granted 43 percent of the time this term, compared with 50 percent in OT 2015. Although this is still well above the overall grant rate for cert petitions generally, which is about one percent, the decrease means that petitioners now face odds worse than a coin flip of getting a grant after one or more relists. The odds of a summary disposition – a disposition without briefing and oral argument – are also lower, with 11 percent of petitions that were relisted at least once ending in a summary disposition compared with 17 percent in OT 2015. The logical result of the reduction in grants and summary dispositions for relists is that the denial rate has increased: A relisted petition overall had 45 percent odds of a denial in OT 2016, as opposed to 33 percent in OT 2015. Court-watchers should continue to pay attention to relists (and perhaps even Relist Watch, as painful as that is), but they’re less reliably a preview of the Supreme Court’s merits docket and summary dispositions than they used to be.

Although multiple relists are a smaller part of the overall pool of relisted petitions – 61 percent of relisted cases were resolved after only one relist – there were still 48 petitions that went through multiple relists, and the impact of a multiple relist has changed compared to OT 2015. In OT 2015, the odds of a relist ultimately ending in a plenary grant decreased with each successive relist, from 50 percent for one or more relists, 31 percent for two or more relists, 15 percent for three or more, 11 percent for four or more, and zero percent for the rest. Not so in OT 2016. This term, the odds of an ultimate grant form a U-shape (what you might call the Masterpiece Cakeshop Effect, after the current king of the relisted grants), with the highest odds of a grant after one relist (50 percent) and six relists (38 percent), and the lowest odds falling in the middle: two relists (15 percent), three relists (11 percent), four relists (13 percent), and five relists (27 percent). Driving this trend is a sharp increase in the likelihood that a case relisted twice will be relisted again, from 58 percent of twice-relisted cases in OT 2015 to 75 percent this past term. So if the Supreme Court decides one relist is not enough, then most of the time two relists will not be enough either, or for that matter three relists (66 percent relisted again) or even four relists (46 percent relisted again). It’s hard to say whether there are any lessons to be learned here; it may be that serial relisting is an artifact of the delay in the appointment of a ninth justice. Only time will tell.

The odds of a denial have also shifted. In OT 2015, the odds of a case ultimately ending in denial (versus a grant or summary disposition) were relatively flat after one, two, three and even four relists, at between 33 percent and 39 percent. In OT 2016, the odds of an ultimate denial after each relist spike after the first relist from 45 percent to between 55 percent and 75 percent for each successive relist. If this is an emerging pattern (which remains to be seen), it suggests that after the second relist, a petitioner will likely have to agonize through serial relists, only to end up with an eventual denial about two-thirds of the time. 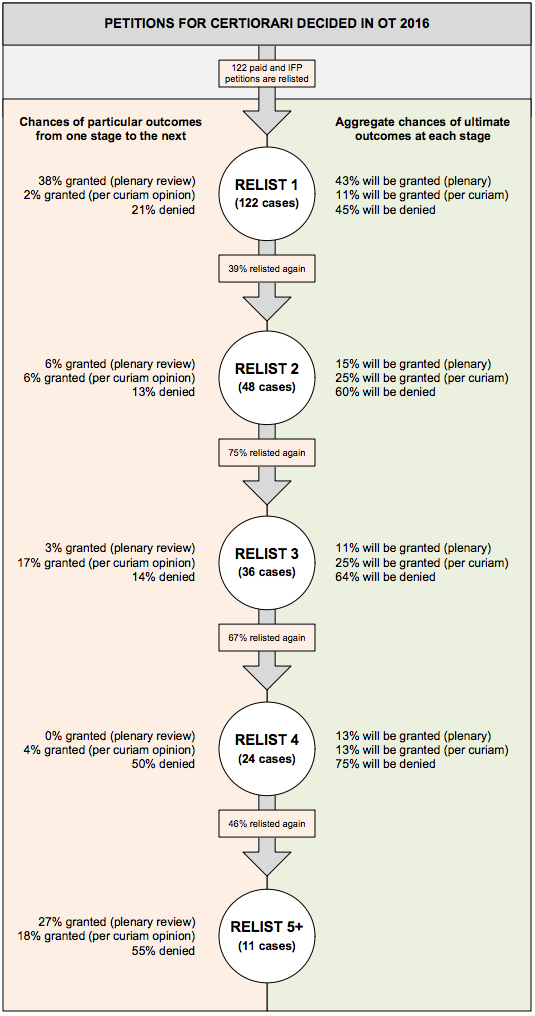 With that, enjoy your relist-free days. Relist Watch will probably return in a few weeks.

Thanks to Andrew Quinn for undertaking the unenviable task of reading every Relist Watch to prepare the relist data used in this article, and to Bryan Gividen for gathering the relists in the first place.

Posted in Analysis, Cases in the Pipeline