When last we wrote about the statistics of relists a little over a year ago, it was to report on what was then a new trend: the court’s practice of routinely relisting petitions that are under serious consideration for review at second or subsequent conferences prior to entering orders granting or denying certiorari. The practice is by now an accepted feature of the certiorari process, and at least one relist is generally viewed as a necessary step on the way to a grant of further review. Here, we offer an update on the statistics of relists. Focusing on October Term 2015, we highlight some emerging trends in what appears to be an evolving practice.

Outside two narrow circumstances, a relist remains an effective prerequisite to a grant of certiorari. Among the 76 cases granted and set for argument in OT2015 (including those consolidated for decision), 59 (77.6%) were relisted at least once. All 16 cases granted without relists fell in one of two categories – 12 were granted at the “long conference” following the court’s summer recess, when the court has the time to give petitions additional review without needing to use the relist procedure. The remaining four were granted in January 2016, at or near the cutoff to allow briefing and argument in the same term. Those numbers are roughly consistent with the statistics from OT2014, when 82.1% of the 67 consolidated cases granted and set for argument were relisted at least once. Among those granted but not relisted in OT2014 were 10 cases granted at the long conference and the two cases granted in December 2014 and January 2015. The bottom line is that unless a petition is on the summer list or comes up for consideration in December or January (when a relist might push argument to the next term), it ordinarily won’t be granted without at least one relist.

We identified 124 relisted petitions for certiorari decided in OT2015. Among those, 75 (60.5%) were relisted just once. That compares with 229 relisted petitions decided in OT2014 and OT2013, of which 123 (53.7%) were relisted just once. The decline in multiple relists suggests that the justices are today using the relist procedure more efficiently than in prior years, reducing the need for repeated consideration of close-call petitions.

In addition to determining the chances of particular outcomes at each relist, we also looked at the cumulative chances of ultimate outcomes overall at each relist – that is, the forward-looking likelihood that a petition would ultimately be disposed of in one way or another at the current or some future relist: 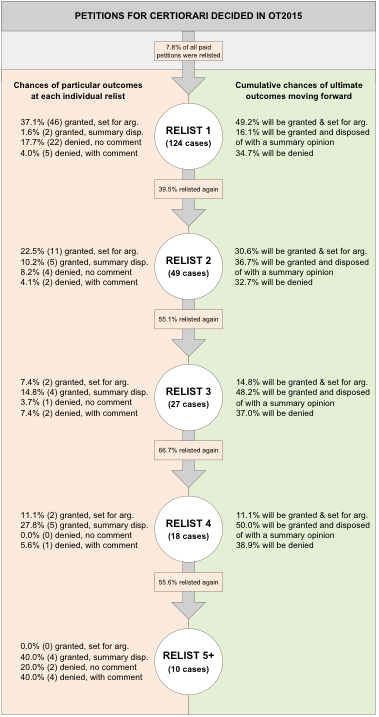 The OT2015 data suggests that a petition has the greatest chance of a grant of plenary review (in terms of both individual and cumulative probability) after the first relist and that chances of plenary review gradually decrease from there. The prospective likelihood that a petition ultimately will be denied is roughly equal at the first and second relists (about one-in-three petitions at each) and increases from there; at the fourth relist, there is nearly a 40% chance of ultimate denial, and by the fifth relist and beyond, chances are 60%. Although the court has never commented publicly about the relist procedure, the data is consistent with the general understanding of the functions of relists. Being relisted once or twice is consistent with the court relisting to check a case for potential vehicle problems – subsidiary issues, such as standing or waiver, that might prevent the justices from deciding a case on the merits – or for a justice to decide how to vote on a case or to persuade colleagues who are still on the fence. When a case is relisted repeatedly, however, it typically means that a justice is writing an opinion of some sort – either a per curiam opinion disposing of the case summarily or a decision regarding the denial of certiorari. 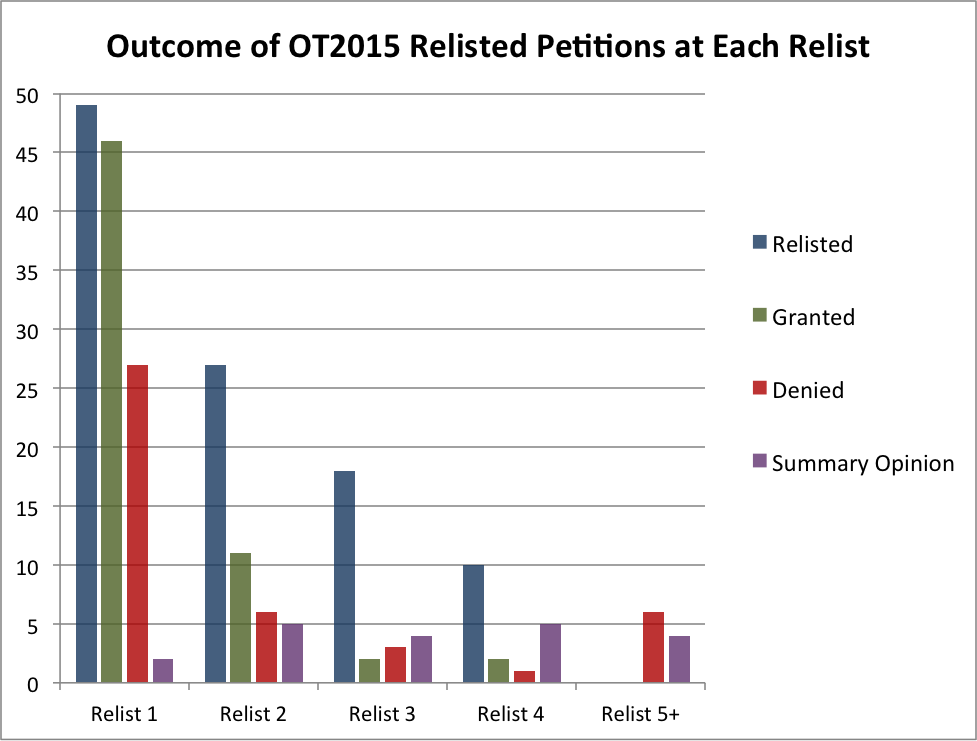