The statistics of relists

The Supreme Court’s decision to grant or deny a petition for a writ of certiorari, like a jury’s decision to convict or acquit a criminal defendant, takes place in a black box. No one but the Justices and their clerks know the reasons that explain particular grants and denials. But at least the procedure by which petitions were considered was – until recently – a transparent and predictable one. The Supreme Court publishes a “case distribution schedule,” which it makes available on its website. Any practitioners, relying on the distribution schedule, could reliably predict when their cases would be distributed to the Justices’ chambers for consideration, when they would be discussed at conference, and when decisions granting or denying their petitions would be made public.

As most regular readers of this blog now know, that has all changed – and abruptly so, especially for so cautious an institution as the Supreme Court. Beginning at the end of October Term 2012, the Court began a curious practice of “relisting” cases for additional consideration before taking further action. A relist occurs when the Justices consider a petition for certiorari at one of their private conferences but decline to act on it, instead “relisting” it, typically for the following conference. What is especially remarkable about this new relisting practice is that, beginning in October Term 2014, it has become an effectively necessary condition for a grant of review.

Here, we look to shed light on how relists have changed the certiorari process from a practitioner’s perspective. Our analysis of the Supreme Court’s orders granting certiorari over the past two Terms indicates that a relist is a necessary but not sufficient condition for a grant of review. We also analyze the chances that a case will be granted at any particular stage in the relisting process, as well as aggregate chances of a grant at each stage forward. The data suggests that the optimal chances for obtaining a grant of review occur after one or two relists and then begin to drop off; petitions that were relisted three or more times had higher rates of denial and per curiam opinions without argument. 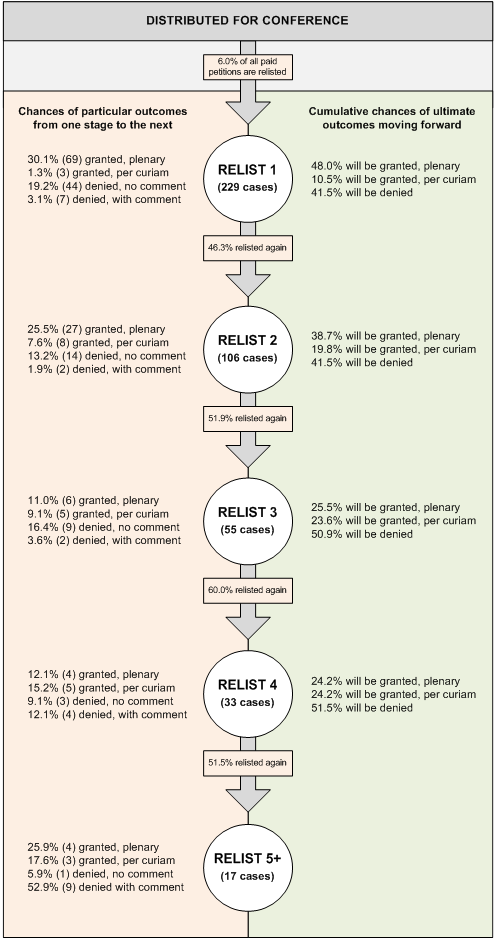 Our analysis looked at a total of 229 relisted petitions to analyze the outcomes of cases, once relisted. Of those:

The proportion of cases that received some form of a grant of certiorari – 134, or 58.5% of the petitions analyzed – is substantially higher than the 4.0% rate at which paid petitions are ordinarily granted. 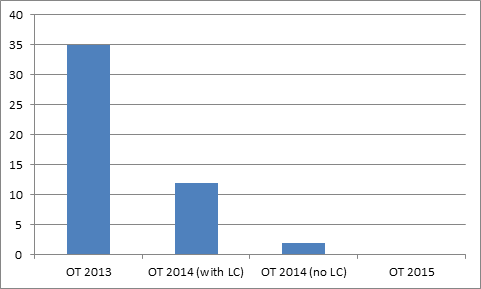 Table 1: Number of granted cases that were not relisted

Of particular interest to practitioners is, of course, the question of what a relist means for the prospect that a petition will be granted. To help answer this question, we used the data from the relisted petitions to track the statistically likely path of a petition upon relisting. The data suggests that a petition has the greatest chance of a grant of plenary review after one or two relists, and higher chances of a summary opinion or a denial after a greater number of relists. Interestingly, however, a petition consistently faces about even odds of being relisted a subsequent time through the first five relists. 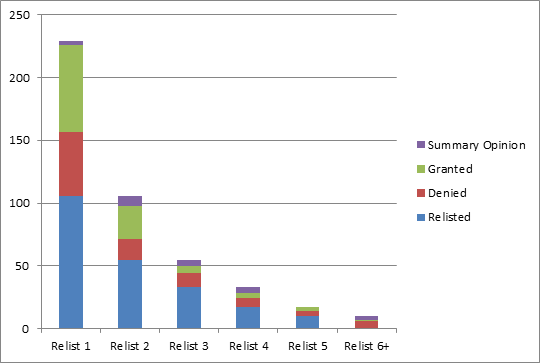 Table 2: Outcome of petitions at each relist 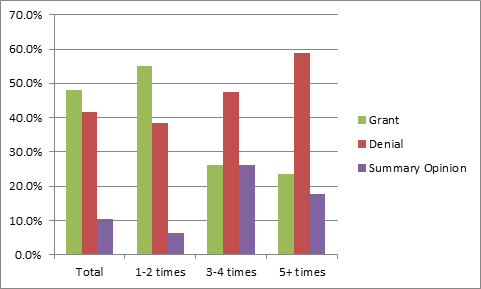 Table 3: Comparison of proportion of cases receiving a grant, denial, or summary opinion when acted on after different numbers of relists

Cumulative probabilities also matter. The cumulative probability of a grant of plenary review steadily decreases as the number of relists increases, though it decreases gradually more slowly from one stage to the next. After being relisted once, there is an overall 48% chance that a petition will be granted—about even odds. But the great majority of the grants (96 of the 110 grants in out data set) occurred after the first or second relists. There is overall a 41.9% chance that a petition will have been granted plenary review after two relists.

Overall, an analysis of the data on the outcome of relisted petitions and the relist history of granted cases suggests that the Court has changed – and is changing – how it treats petitions for certiorari. It is now nearly a prerequisite for a grant of plenary review for a petition to be relisted (except for petitions granted at the Long Conference), a divergence from the historical practice of granting many petitions without a relist.