Justice Stevens on the Cubs and the World Series

When the Chicago Cubs return to Wrigley Field this weekend for their home games in the World Series against the Cleveland Indians, retired Justice John Paul Stevens will be in the stands.

“I’m in Florida now but I will be in Chicago to see the fourth game, Saturday,” Stevens, 96, a lifelong Cubs fan, said in an interview today. His busy schedule will only allow him to attend that game. “I’m looking forward to that very much. I hope it’s an enjoyable occasion.” 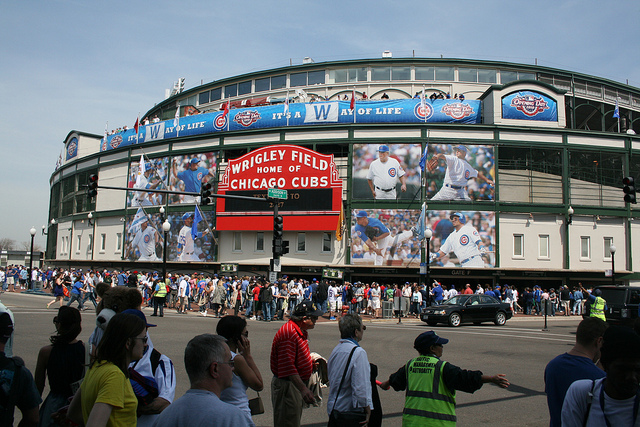 Stevens has long relished telling tales about his love of the Cubs, who last won a World Series in 1908 and were last in one in 1945. This reporter, himself a lifelong Cubs fan, asked the court whether the justice might be willing to chat about the team now that it has returned to the fall classic for the first time in 71 years. Soon enough, the justice’s chambers called and patched me through to Stevens.

“They’re a wonderful team and I’m delighted they’re in the World Series, but I’m a little disappointed in the first game,” Stevens said the day after Tuesday’s Game 1 in Cleveland, in which the Indians drubbed the Cubs 6-0. “Cleveland is tougher than I thought.”

Stevens first visited Wrigley Field as a nine-year-old during the 1929 World Series pitting the Cubs against the Philadelphia Athletics.

“I had listened to the Cubs games all summer on the radio,” Stevens said. “There was Hal Totten for WMAQ, and Pat Flanagan for WBBM. He broadcast the out-of-town games, pretending he was an actual spectator.”

A young Ronald Reagan took a similar approach as a broadcaster in Iowa, as it was common during that era for announcers to take play-by-play developments off a ticker tape and relate them as if they were present.

At that first game of the 1929 series, Stevens and his father sat behind home plate, where the future justice was thrilled to see Cubs greats such as Hack Wilson and Charlie Grimm. And when Philadelphia manager Connie Mack started a veteran pitcher, Howard Ehmke, instead of his younger, fastball aces, Stevens thought the Cubs would have an easy game. Instead, Ehmke struck out 13 straight Cubs and the A’s won the game, 3-1.

“That was a tragedy for a young fan,” Stevens said. (It should really go without saying that the Cubs lost that series, four games to one.)

Stevens never tires of discussing his most famous brush with baseball—the 1932 World Series between the Cubs and the New York Yankees, when Yankees great Babe Ruth hit his much-debated “called shot.” The short version is that during the fifth inning of Game 3, Ruth pointed to center field, then hit the next pitch out of the park.

As Stevens has explained, Ruth was jawing with a pitcher in the Cubs dugout, Guy Bush, evidently over the Cubs’ decision not to give a full World Series bonus share to Mark Koenig, a former Yankee teammate of Ruth’s who was with the Cubs in 1932. Stevens once told an interviewer that he clearly remembered Ruth and Bush engaging in a “colloquy” on the issue (“colloquy” not being a common term for trash talking on the baseball diamond).

Describing the events to me, Stevens said, “You probably remember, they were in an argument as to whether Mark Koenig was entitled to a full share for the World Series.” (I’m pretty sure he meant that I recall the historical accounts, not that I was also there in 1932.)

“What was Ruth’s motive, no one knows for sure,” said Stevens, who was a 12-year-old sitting behind the Cubs dugout on the third-base line during that game. “He did point at the scoreboard, and then hit the ball out of the park the next pitch. But I think he was in an argument with Guy Bush at the time. And I didn’t know if he wanted to hit the pitch there or he wanted to hit Guy Bush.”

Stevens kept a scorecard from that 1932 game at Wrigley Field in his chambers, among other Cubs memorabilia. He was still serving in the U.S. Navy as a codebreaker in 1945 when the Cubs last appeared in a World Series.

“I was not able to attend any of the games that year,” he said.

In 2005, Justice Stevens threw out a ceremonial first pitch during a routine game at Wrigley Field. He practiced in a Washington park with his daughter and in the Supreme Court’s gym with his law clerks. In front of some of his children and grandchildren that day, he threw a pitch that one observer described as a little high and outside, but it least it was not in the dirt, where many ceremonial pitches fall.

“I did a pretty good job,” Stevens said. “I think I got it over the plate. I was kind of hoping they would ask me to throw out a first pitch during the World Series, but they have other people that they are committed to.”

I asked Stevens his thoughts on being among a retinue of famous Cubs fan that includes conservative columnist George F. Will, comedian Bill Murray, actor John Cusack and rock musician Eddie Vedder. Only Will’s name drew a reaction.

“There’s one issue on which George Will and I agree—as Cubs fans,” Stevens said. “He knows more about baseball than I do. He studies the game and he knows the game very well.”

Stevens seemed familiar with an opinion written by Judge Jeffrey Sutton of the U.S. Court of Appeals for the 6th Circuit, in Cincinnati, in November 2015 that has drawn renewed attention this month.

Writing for a unanimous three-judge court in a Fourth Amendment case, Sutton said the risk that a particular schoolchild would be subject to another search of the type at issue in the case “is no more ‘actual and imminent’ than the Chicago Cubs (or, we fear, the Cleveland Indians) winning the World Series.”

“He’s a very good judge, and a friend of mine,” Stevens said of Sutton, who is apparently an Indians fan. “I admire his opinions, although I guess we have differences on the pending Series.”

Justice Stevens concluded our conversation with a prediction.

“Well, I thought they were going to win in four straight,” he said. “I guess I was wrong on that. I’m confident that they’ll pull it through. They have an awfully good team, and I think they’ll do it in the next four games.”