A VIEW FROM THE COURTROOM 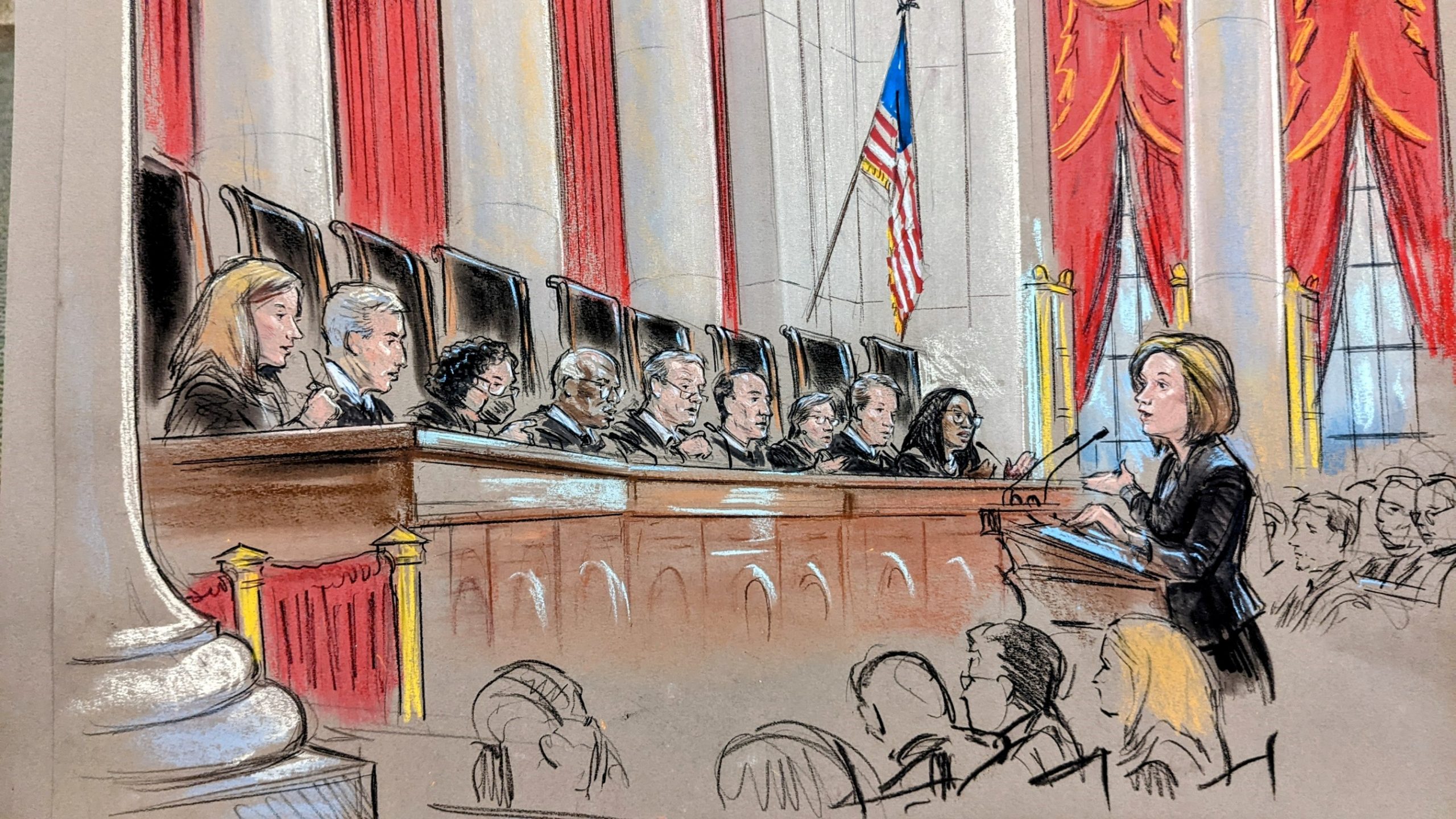 A View from the Courtroom is an occasional series offering an inside look at oral arguments and opinion announcements unfolding in real time.

It’s the last week of arguments before the holiday break, and the court has the big wedding website case today and the independent legislature theory case on Wednesday.

In the last few days, the court has been represented at some of Washington’s biggest social and entertainment events of the year. On Thursday night, retired Justice Stephen Breyer and his wife, Joanna, attended the state dinner for French President Emmanuel Macron at the White House. When they arrived and walked, as most of the guests did, past a small retinue of reporters, Breyer was asked how he was enjoying retirement. The Washington Post reported that he “turned to pantomime … as if words had escaped this man of precise language. He clapped his hands to the sides of his face and then scribbled some imaginary rejoinder into the air.” Some have said that with Breyer’s retirement, the age of the “downright silly” hypotheticals had passed. That idea will be challenged today.

Meanwhile, on Sunday night, a star-studded crowd filled the Opera House at the John F. Kennedy Center for the Performing Arts, for the Kennedy Center Honors, a recognition of five artistic individuals or groups. Chief Justice John Roberts was in attendance, as he has been often in the past, and a White House pool reporter’s dispatch indicated that the chief justice was shown briefly on the in-house screen applauding the presence of Paul Pelosi, the husband of outgoing House Speaker Nancy Pelosi and the victim of that vicious attack by a home intruder last month.

The chief was arguably not the most luminescent Roberts at the event last night. That would be Julia Roberts, who participated in the segment devoted to honoree George Clooney. (The other honorees were Amy Grant, Gladys Knight, Tania León, and the group U2. The edited show is scheduled to air on CBS on Dec. 28.)

There is no question about the artistry of the Kennedy Center honorees. In the courtroom today for 303 Creative LLC v. Elenis, there will be quite a bit of discussion of whether website designers, cake bakers, stationers (as in suppliers of wedding invitations), jewelers, caterers, and others occupied around the wedding business are indeed artists engaged in expressive conduct. It will also address whether freelance writers, political publicists, and writers and creators of hit Broadway musicals known to be seen by several recent justices are, in any sense, public accommodations. And the argument will veer into some uncharted territory.

Lorie Smith, whose website design business is the subject of today’s case, is in the crowded courtroom this morning, seated in the second-to-last row of the public gallery. 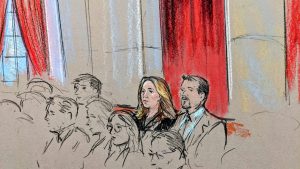 The VIP section of the courtroom is full today, with only a few faces we recognize. Jeffrey Minear, who retired at the end of September as counselor to the chief justice, is in the section, and he is soon joined by Patrick Jackson, the husband of Justice Ketanji Brown Jackson. We don’t know who the other VIP guests know or what strings they pulled to score seats.

Otherwise, the star power is a little lacking, as it seems none of the Hollywood crowd in town for the Kennedy Center Honors decided to stick around to attend a big Supreme Court argument.

Amy Howe has the main account of the argument. Up first is Kristen Waggoner of Alliance Defending Freedom, who argued for cake artist Jack Phillips in Masterpiece Cakeshop v. Colorado Civil Rights Commission. It is hard to believe, but that argument was five years ago to the day. One reporter spotted Phillips outside the courtroom today at a small rally to support Smith, but he apparently has not gotten into the courtroom.

Justice Elena Kagan presses Waggoner on a hypothetical that is “not really a hypothetical, because I happen to have two clerks in my chambers this year who are engaged, so, in looking at this case and preparing this case, I looked at their websites.”

(It quickly becomes clear they are marrying other people, not each other.)

Kagan asks about a wedding website without much customized expression, and whether the designer could one day decide not to create sites for same-sex couples. She refers to a “standard” website, though Waggoner calls that “plug and play” and Smith throughout her briefing emphasizes that she doesn’t do template websites and that her creations are customized around the story of each couple.

“That is speech,” Waggoner says. “You are announcing a wedding. And if you believe the wedding to be false, then the government would be compelling you to say something that you otherwise wouldn’t say.”

Jackson has a hypothetical for Waggoner probably not inspired by her clerks. She asks about a photo outlet at a shopping mall that offers “Scenes with Santa,” including sepia-toned vintage pictures evoking the 1940s and 1950s.

She will refer to this several times as “It’s a Wonderful Life” scenes, which I’m sure the rights holders of the 1946 Frank Capra Christmas class will be just thrilled about. (There are Black characters and extras in the film, but mostly as domestic workers or other minor roles.)

Waggoner says the photo store’s “objection” is “not necessarily in that photograph, but even if it were, this court has protected vile, awful, reprehensible, violent speech in the past.” Meanwhile, Justice Neil Gorsuch presses Colorado Solicitor General Eric Olson about the state’s treatment of Phillips.

“Mr. Phillips did go through a re-education training program pursuant to Colorado law, did he not, Mr. Olson?” Gorsuch says.

Olson says the baker was required to go through “a process to make sure he was familiar with Colorado law.”

“Someone might be excused for calling that a re-education program,” Gorsuch says. 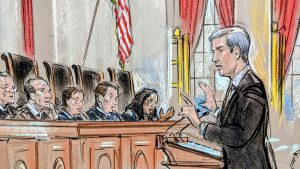 Justice Samuel Alito asks Olson about “some hypotheticals in a brief submitted by Josh Blackman.”

The examples come from an amicus brief in support of Smith co-written by Blackman, a professor and frequent commentator about the court, for the Jewish Coalition for Religious Liberty.

“A Jewish man and a Jewish woman, who are engaged to be married, ask a Jewish website designer to build a website to celebrate their [upcoming] nuptials. No problem.” Alito says, adding only the bracketed word to the language from the brief, which added “Mazal tov!” to that example.

“Another Jewish man and a Christian woman, who are engaged to be married, ask a Jewish website designer to build a website to celebrate their nuptials. Big problem,” Alito says, again quoting the brief. “Many Jews consider intermarriage an existential threat to the future of Judaism.”

Does that website designer have to accept the second couple? he asks Olson. Yes, if they offer a general service to the public, they have to offer that regardless of religion, Olson says.

After some further back and forth, Alito is not done with the examples from the Jewish Coalition brief.

“An unmarried Jewish person asks a Jewish photographer to take a photograph for his JDate dating profile,” Alito says, quoting the brief before adding his own observation that JDate “is a dating service, I gather, for Jewish people.”

“It is,” Kagan chimes in quickly, to laughter in the courtroom.

“All right,” Alito continues, “maybe Justice Kagan will also be familiar with the next website I’m going to mention. ‘Next, a Jewish person asks a Jewish photographer to take a photograph for his AshleyMadison.com dating profile.’”

Alito is leaning back in his chair, so his reference to AshleyMadison.com has a few people around the courtroom turning to their neighbor to apparently ask, first, “What did he say?” And some appear to be asking, “What’s Ashley Madison?” And others just have wry smiles as another wave of laughs ripples through the courtroom about the Canada-based dating site marketing to married people or others already in relationships.

The Jewish Coalition brief says of the Ashley Madison example, “Swipe left for shanda,” with a footnote explaining the Yiddish word “to describe something shameful.” (There are other Yiddish lessons in the brief.)

The reserved Josh Blackman I know is probably embarrassed a little by all this attention to his brief. Hah! Actually, within a half hour of Alito’s questions — and before the argument is even over — Blackman has posted on The Volokh Conspiracy about it. “I was pleased that Justice Alito found useful the amicus brief” of the coalition, he writes.

The argument scheduled for 70 minutes goes on for 2 hours, 21 minutes, which is roughly in line with the trend this term of sessions running about double their set time. Today, at least, there is some consciousness of that.

Late in the argument, Jackson, addressing Deputy Solicitor General Brian Fletcher, who was arguing in support of Colorado, says, “Can I just say that I’m sort of trying to think about what you’ve just said in your exchange with …” She hesitates trying to get the name “Justice Kavanaugh” out. 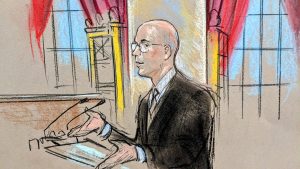 When Gorsuch gets a chance to question Olson, also well into the argument, he greets him with a hearty “Good morning.”

“Is it still morning?” Olson says.

“I’m here all day, Justice Gorsuch,” Olson says. Actually, he gets to leave after the first case, while the justices have to stick around for a second, much more mundane argument about bankruptcy. That one will defy the trend and clock in at a tidy 1 hour, 12 minutes.

Correction (Dec. 6 at 2:22 p.m.): An earlier version of this article erroneously reported that Justice Neil Gorsuch initially referred to Jack Phillips, the plaintiff in Masterpiece Cakeshop, by the wrong name.