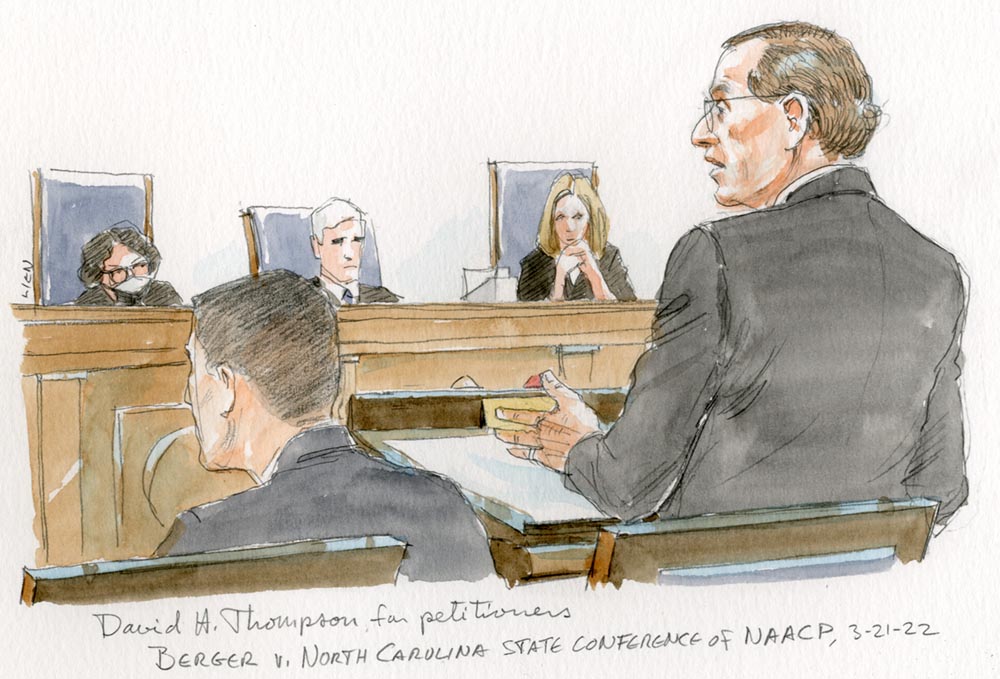 With all eyes focused on the nomination hearing for Judge Ketanji Brown Jackson, selected by President Joe Biden to succeed the retiring Justice Stephen Breyer, the Supreme Court was back to work on Monday morning. In Berger v. North Carolina State Conference of the NAACP, the justices heard oral argument on whether two Republican leaders of the North Carolina legislature can join a lawsuit to defend the constitutionality of the state’s voter-identification law when the state’s attorney general, a Democrat, is already defending the law on behalf of the state’s board of elections. After a little over an hour of debate, the justices seemed inclined to allow the legislators to intervene in some capacity, but – with Justice Clarence Thomas hospitalized with an infection and two more justices, Neil Gorsuch and Brett Kavanaugh, relatively quiet – it is hard to make predictions with any certainty.

The state’s legislature passed the voter-ID law at the center of the case in December 2018. The law requires voters to provide photo identification to cast a ballot and instructs county election boards to provide ID cards at no cost to voters. After the law went into effect over a veto by the state’s governor, Democrat Roy Cooper, the North Carolina NAACP went to federal court, arguing that the law violates both federal voting rights laws and the Constitution.

Philip Berger, the leader of the North Carolina Senate, and Timothy Moore, the leader of the North Carolina House of Representatives, sought to intervene in the lawsuit. But the U.S. Court of Appeals for the 4th Circuit ruled that the district court was not wrong when it rejected their request to do so, because the state’s Democratic attorney general, Josh Stein, and the board of elections were already defending the law. The legislators then came to the Supreme Court, which agreed last fall to weigh in.

Representing Berger and Moore, lawyer David Thompson told the justices that the legislators are entitled to intervene because they have a different focus than the state elections board – whose “primary objective,” Thompson stressed, is “receiving clear guidance on what law, if any, will need to be enforced,” which may in turn prompt the board to use a different litigation strategy than the legislators. Second, Thompson asserted, there is “no basis in this case for a federal court to second-guess a state’s decision that it needs a representative exclusively focused on vindicating state law.”

Justice Sonia Sotomayor was perhaps the most skeptical about the need to intervene. The attorney general is defending the law and arguing that it is constitutional. If that’s the case, Sotomayor asked, what is the problem, other than that the legislators don’t approve of the attorney general’s litigation strategy?

Justice Stephen Breyer worried aloud, as he often does, about how to formulate a rule that would work not only for this case but also for future cases. He pressed Thompson to explain exactly what he was looking for in this case: Is it a rule that the presumption doesn’t apply at all, or that it only applies to the states and not to private parties? If it is the latter, Breyer asked, how does the court say so?

Thompson countered that the “narrowest grounds to rule in our favor would be to say that this is a paramount interest of a state,” which is “entitled under basic principles of federalism to have that federal interest vindicated by a representative who is exclusively focused on that.”

Arguing for the NAACP, lawyer Elisabeth Theodore emphasized that “when a proposed intervenor’s interest is identical to one that’s already represented in the case, we presume that the existing representative is adequate, and that common-sense presumption holds particular force when the existing representative is a state official charged ethically and legally with defending state interests.” In this case, Theodore continued, the legislators are trying to intervene to assert the same interest that Stein is representing. “And he’s not only representing that interest,” Theodore noted dryly, “unfortunately for my clients, he’s winning.”

Chief Justice John Roberts challenged Theodore’s contention that there is a federal interest in having the parties on each side of a case “speak with a single voice.” “Where,” Roberts asked, “did that come from?” In many cases, Roberts observed, “we have two parties representing one side of the case, often with slightly different interests.” “If the sovereign state that is a party in the case has a law that says these people have to represent us,” Roberts concluded, “I don’t know of any federal interest that outweighs that.”

Arguing on behalf of the board of elections, North Carolina Deputy Solicitor General Sarah Boyce told the justices that the case involved a “fundamental principle of state constitutional law”: Giving the legislators the right to represent the state to enforce the law would violate the principle of separation of powers, she explained.

But Alito saw this argument as strengthening the legislators’ case, rather than the board’s. Doesn’t that show, he asked Boyce, “that your perspective on this is different from the legislature’s?”

Kagan proposed a middle ground. If the legislators were arguing that they only had an interest in defending the law, which is different from the executive branch’s interest, she asked Boyce, “would you be all right with that?” It would be, Kagan suggested, “perfectly permissible.”