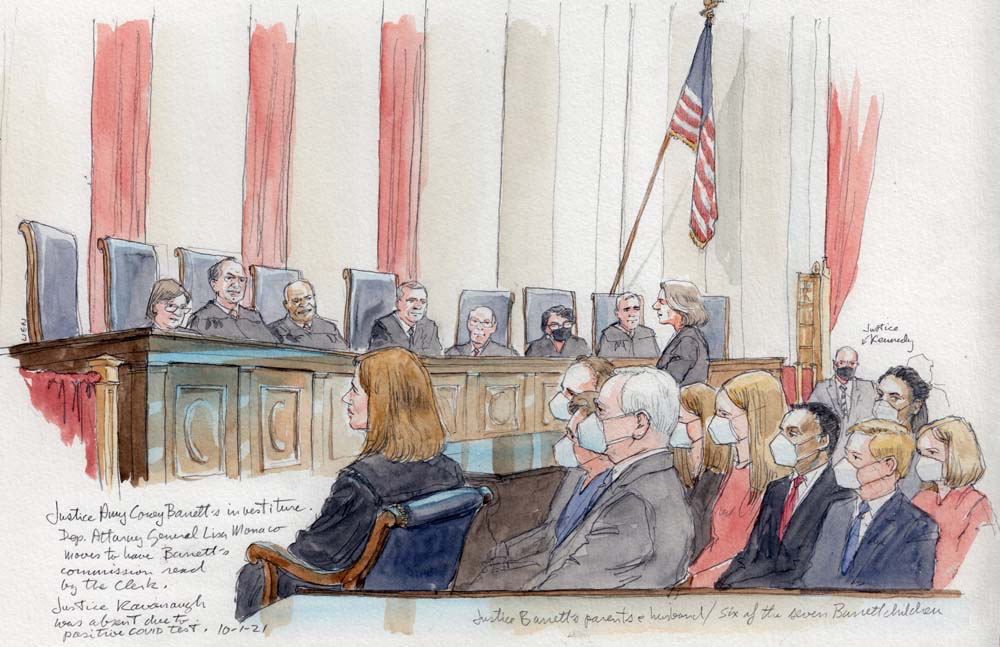 Deputy Attorney General Lisa Monaco moves to have Justice Barrett's commission read by the clerk, as Barrett and her family look on. (Art Lien)
Share

The Supreme Court on Friday held an investiture ceremony for Justice Amy Coney Barrett. Although Barrett was sworn in as a justice shortly after her confirmation nearly a year ago, the investiture – a brief ceremony at which the court officially receives a new justice’s commission – was postponed because of the COVID-19 pandemic. And the pandemic would overshadow the ceremony itself: Shortly before the program was scheduled to begin, the Supreme Court announced that Justice Brett Kavanaugh had tested positive for COVID-19 and would not attend.

The ceremony itself follows a familiar, if short, script. The new justice enters and sits in the chair that was used by Chief Justice John Marshall in the early 19th century. Typically, the attorney general presents the justice’s commission. After the clerk of the Supreme Court reads the commission aloud, the new justice ascends to the bench to take the judicial oath.

According to pool coverage of the investiture by Jessica Gresko of the Associated Press, roughly 100 guests attended Friday’s ceremony. Six of Barrett’s seven children were there – all but the youngest, Benjamin. All of the guests and the Barrett children were wearing masks, as was Justice Sonia Sotomayor, who is diabetic and therefore at a higher risk for complications from COVID-19. Barrett and the rest of her colleagues did not wear masks.

Deputy Attorney General Lisa Monaco presented Barrett’s commission, which was signed by former President Donald Trump, to the court. Attorney General Merrick Garland, who was himself nominated to the court by then-President Barack Obama in 2016 but was never given a hearing by the Republican-controlled Senate, attended Kavanaugh’s 2018 investiture but was not present on Friday.

After the five-minute ceremony, Barrett took the traditional walk down the court’s front steps with Chief Justice John Roberts. Barrett was then joined by her husband, Jesse. After posing for photos, they then appeared to go back inside the court building.