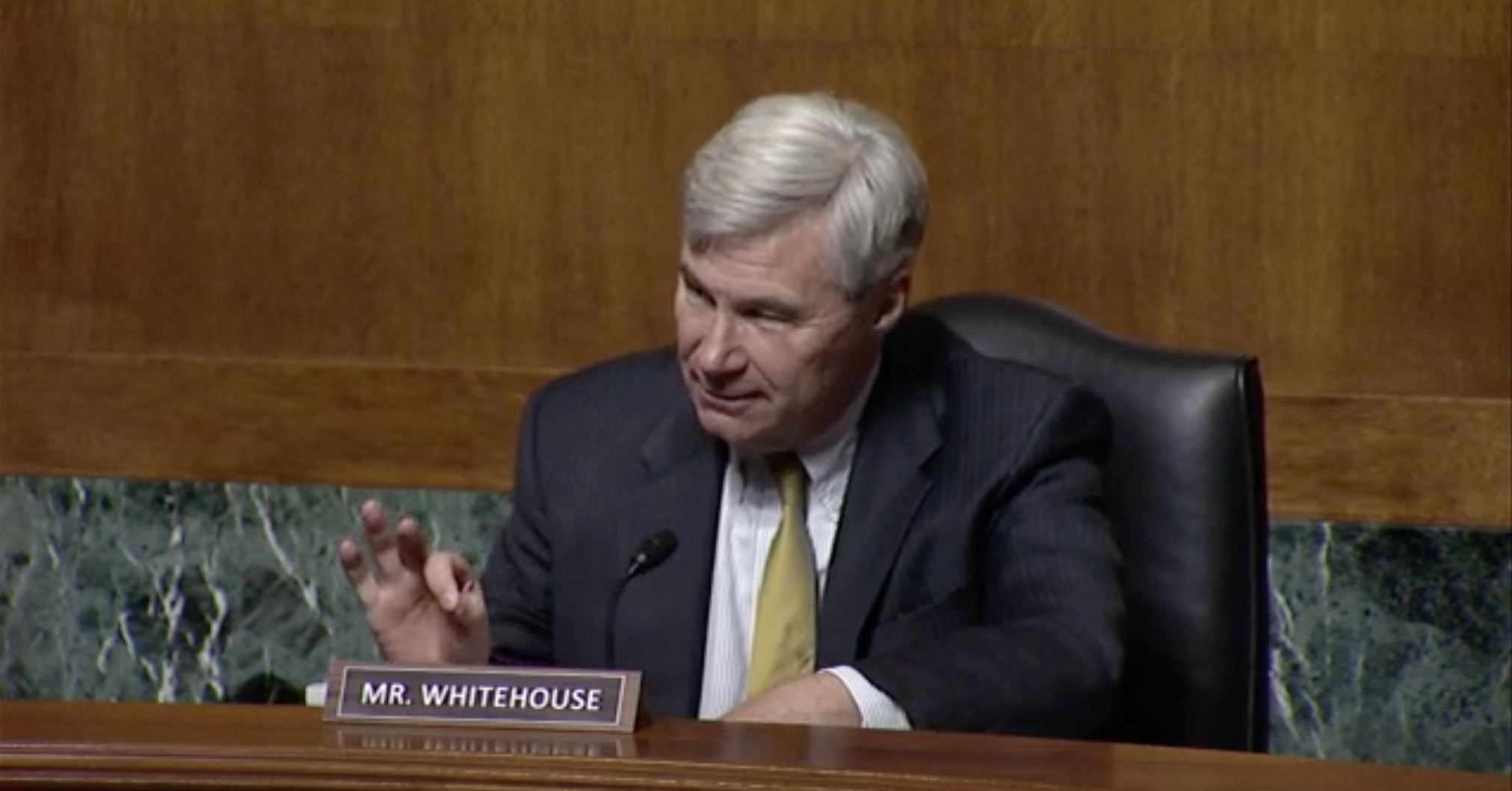 Sen. Sheldon Whitehouse continued his effort this week to highlight what he views as problematic behavior by the Supreme Court.

As chair of the Senate Judiciary Committee’s subcommittee on federal courts, the Democratic senator from Rhode Island alleged in a hearing on Tuesday that Republican-appointed justices on the court violated the general principle against appellate fact-finding in two of the most high-profile and hotly debated rulings issued by the Roberts court: Citizens United v. Federal Election Commission and Shelby County v. Holder. Tuesday’s hearing came six weeks after Whitehouse convened a hearing on efforts of large political donors to influence the Supreme Court.

In general, Supreme Court justices, like all appellate judges, are not supposed to resolve purely factual disputes. Instead, Whitehouse said, they should look to trial courts for the factual record of a given case, and to the legislature for the factual findings that lawmakers made when passing a law.

Whitehouse alleged that the factual underpinnings of Citizens United and Shelby County have since been proven false. Because those underpinnings were found anew in the Supreme Court, instead of in the lower courts or in Congress, he argued, the legitimacy of the decisions is up for debate.

Both cases were decided by a 5-4 vote, with Chief Justice John Roberts and Justices Anthony Kennedy, Antonin Scalia, Clarence Thomas and Samuel Alito in the majority. In 2010, Citizens United ruled that limits on independent political spending by corporations and unions are unconstitutional restrictions on free speech. In 2013, Shelby County ended a long-standing requirement that states and counties with a history of voting discrimination get “preclearance” from the Department of Justice before changing election procedures.

Theodore Shaw, a professor of law at the University of North Carolina and former leader of the NAACP Legal Defense Fund, told the subcommittee that “the fact-findings that the chief justice made, or purported to make, in [his majority opinion in] Shelby County were wrong.” In his opinion, Roberts wrote that the factual landscape of extensive voting discrimination that provoked inclusion of the preclearance requirement in the Voting Rights Act of 1965 had changed drastically by 2013, so the requirement was no longer justified by the Constitution. That “nearly half-century-old set of facts,” Shaw argued, “was not the set of facts Congress relied on” when it voted nearly unanimously to extend the VRA with the preclearance requirement in 2006.

Paul Smith of the left-leaning Campaign Legal Center pointed to a similar issue in Citizens United. Kennedy’s opinion for the court in that case “relied on the factual assertion that independent expenditures in political campaigns … can never be corrupting” unless there is a “quid pro quo,” Smith said. But the lower courts, he continued, developed no evidence on that question because of the way the case was presented. Kennedy’s majority opinion, Smith told Sen. Mazie Hirono of Hawaii, “changed the goalposts.”

Ilya Shapiro of the libertarian Cato Institute offered competing testimony. No type of fact-finding, he argued, judicial, legislative or otherwise, “mattered much in those decisions.” Regarding the question in Shelby County of when preclearance becomes outdated, “we can argue over when that point comes,” Shapiro said, “but it’s not fact-finding. It’s judging.” And “Citizens United is even less fact-dependent,” he argued. Shapiro disagreed with Smith’s assertion that Citizens United was based on novel fact-finding by Kennedy, characterizing the decision as an analysis, “grounded in law,” about what the text of the Constitution does or does not allow.

In both cases, Whitehouse and other Senate Democrats argued that subsequent developments have disproven the Supreme Court’s factual assumptions. The senators pointed to the creation of so-called super PACs and the sharp increase in independent political expenditures since 2010, and the battles between voting-rights groups and Southern state legislatures over access to the ballot box since 2013.

The broader question was framed by Sen. Richard Blumenthal of Connecticut. “Is there a legislative solution,” he asked, if Congress believes a Supreme Court decision is based on appellate fact-finding that is later proven false, and the decision is therefore invalid? Professor Allison Larsen of William & Mary School of Law, whose research focuses on judicial fact-finding, urged the subcommittee to consider stronger rules for Supreme Court amicus briefs – which, she argued, increasingly do the work of sourcing facts to support one party or the other. These include requiring amicus briefs to undergo more rigorous “adversarial testing” and disclose their funding sources.

Characteristically, Whitehouse suggested a bolder approach. If Congress or the president believe a Supreme Court decision is based on novel, false facts, he said, “from a separation of powers point of view, it’s hard to see why” they should pay those decisions “any deference at all.”