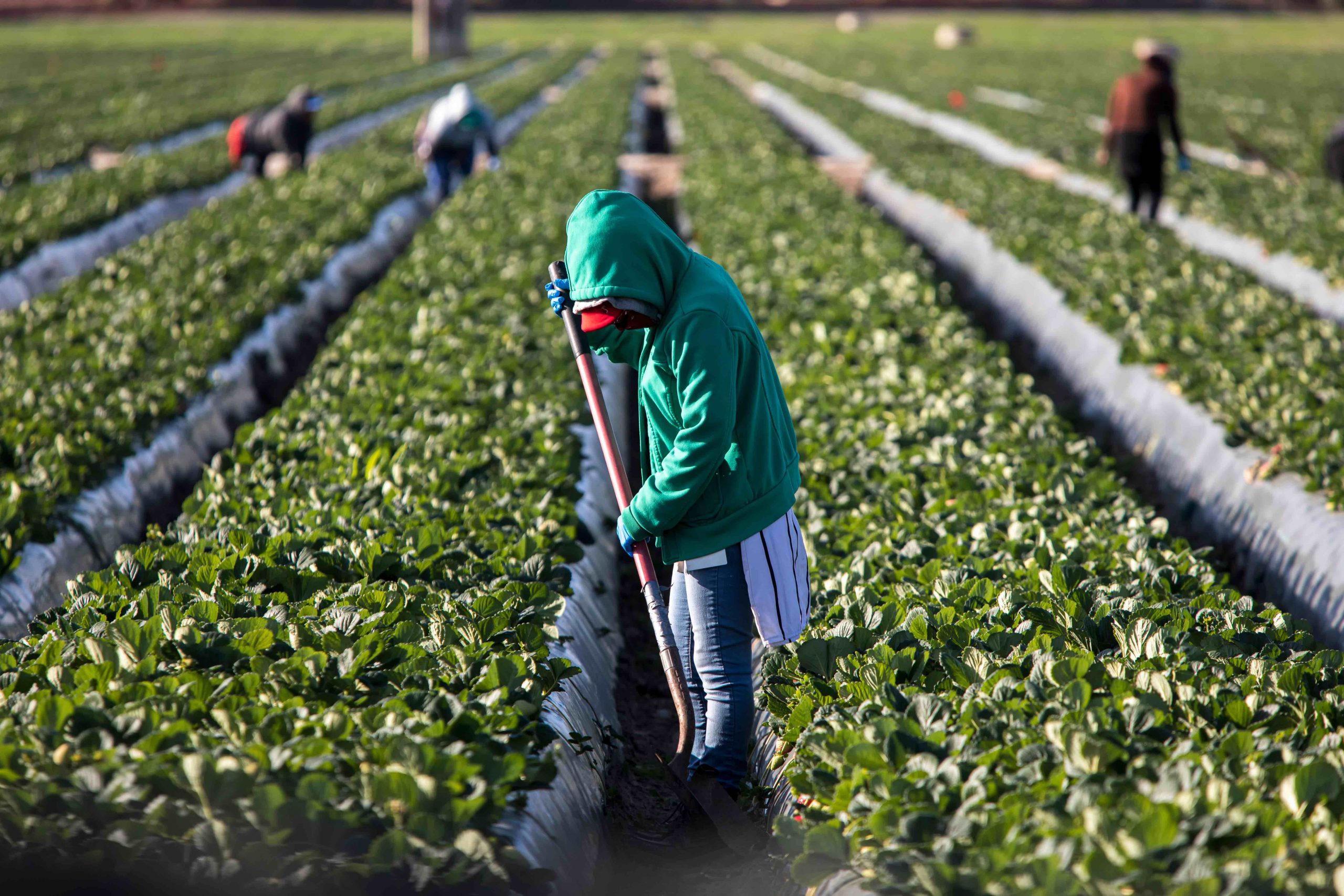 A worker on a strawberry farm in Orange County, Calif. (F Armstrong Photography via Shutterstock)
Share

Over the past few years, the Roberts court has issued decisions that have expanded the rights of property owners who want to challenge government action and made it more difficult for public-employee unions to fund their operations. Property rights and union interests collide on Monday when the justices hear oral argument in Cedar Point Nursery v. Hassid, a challenge to the constitutionality of a California regulation that allows union organizers to enter the grounds of an agricultural employer to speak with employees about supporting a union. Two California growers contend that the regulation violates the Fifth Amendment, which prohibits the government from taking property without compensation. Defenders of the regulation caution that a ruling for the growers could have sweeping repercussions – potentially jeopardizing not only union organizing but also a wide range of government health and safety oversight.

The regulation at the center of the dispute was enacted in 1975 by California’s Agricultural Relations Board. It allows union organizers to enter the grounds of an agricultural employer to speak with employees about supporting a union for three hours each day over a 30-day period, for a total of 120 days each year. The organizers don’t need to obtain permission from the employer; they just have to notify the board and the employer that they intend to enter the property.

The lawsuit before the Supreme Court next week began in February 2016, when two California growers filed a lawsuit in federal district court in California. Cedar Point Nursery, located near the state’s border with Oregon, produces strawberry plants. It has approximately 100 full-time workers and more than 400 seasonal workers, who are housed in hotels across the state line in Oregon. Fowler Packing Company, based in Fresno, California, ships grapes and citrus fruit. It employs up to 2,500 workers in its field operations and 500 people at its packing facility. Its workers do not live on company property.

The district court threw out the case, and a divided U.S. Court of Appeals for the 9th Circuit upheld that ruling, allowing the regulation to stand. The growers then went to the Supreme Court, which last November agreed to weigh in.

Arguments of the growers

In their brief on the merits, the growers characterize the regulation as the “product of a bygone era,” when agricultural workers often lived on their employer’s property and were largely cut off from the rest of the world. But the regulation, the growers observe, gives unions access to the property of all agricultural employers, regardless of their workers’ living situations or the ability of the unions to reach the workers through other means (either physically or through advertising).

Because the regulation gives union organizers access to their property, the growers continue, it creates an easement, which is a “standalone” property interest. Under the Supreme Court’s cases, they argue, when the government takes that property interest without providing compensation, it is categorically treated as a taking that violates the Fifth Amendment.

It doesn’t matter, the growers add, that union organizers don’t have around-the-clock access to their property. The growers emphasize that the regulation still requires them to admit union organizers to their property for as many as 120 days each year. Limits on the scope of the easement, the growers tell the justices, are relevant only to determine how much compensation they are owed; they have nothing to do with whether their property was “taken” in the first place. And it is important, the growers conclude, to have a bright-line rule barring the government from creating even a limited easement without compensation because the right to exclude others is such an important part of owning property.

Arguments of the board

The California Agricultural Labor Relations Board stresses that the regulation imposes only narrow obligations on growers. Union organizers, the board emphasizes, can only enter specific parts of an employer’s property at particular times of the work day – before the start of the work day, at lunchtime and after work. Moreover, the board adds, union organizers have only invoked the regulation to gain access to an employer’s property “sparingly.”

The board acknowledges that the Supreme Court has recognized that government regulations can constitute “takings” of property. However, the board notes, the court has recognized only two kinds of regulatory action that are always categorized as takings, without looking at the justification for the regulation. Both of those involved regulations “that are the functional equivalent of a direct physical appropriation of property”: The first was a statute that gave a cable television company permission to access the property and permanently install equipment there; the second was a condition on a permit that required a property owner to grant an easement allowing the public to pass across his beachfront property.

Because the California regulation is limited in scope and does not permanently occupy the growers’ land, the board contends, it is nothing like either of those scenarios. Indeed, the board observes, the Supreme Court has already signaled that a similar access right, arising under federal labor laws, is not always categorized as a taking. Instead, the board suggests, any challenge to the regulation should be based on the test normally used for regulations, which looks at “whether a regulation forces property owners to bear unduly onerous public burdens.”

“Friends of the court” weigh in

Reflecting the high stakes in the case, a wide range of “friend of the court” briefs was filed in support of both sides. One notable submission came from the federal government, which – because of the change in administrations – wound up siding with both the growers and the board at different stages in the case. In a brief filed on Jan. 7, the Trump administration’s acting solicitor general, Jeffrey Wall, agreed with the growers that the regulation is a taking of their property, although his reasoning was slightly different from that of the growers. But in a letter to Scott Harris, the clerk of the court, on Feb. 12, the Biden administration’s acting solicitor general, Elizabeth Prelogar, told the justices that Wall’s Jan. 7 filing “no longer represents the position of the United States.” Instead, Prelogar wrote, the United States now believes that because the California regulation only allows temporary access by union organizers, it does not necessarily constitute a physical taking.

One brief, filed by a group of agricultural trade associations, assures the justices that even if there had been a good reason to infringe on owners’ property rights when the regulation was adopted 45 years ago, there no longer is. Because farmworkers do not normally live on the land where they work, and virtually everyone now has a smartphone and can be reached on social media, the trade associations tell the justices, union organizers don’t have to have access to the farms to speak with workers.

But a union representing California farm workers pushes back against the growers’ suggestion that the regulation is no longer necessary, arguing that the conditions that led the board to adopt the regulation 45 years ago “have not changed meaningfully in the decades since then.” A 2013 study found that 14% of day laborers do not own any cellphone at all, much less a smartphone, the union writes, and a 2010 study estimated that over 100,000 workers spoke a language that was not Spanish or English.

Briefs from state and local governments urge the justices to consider the broader implications of their ruling. A common argument in these briefs is that, under the growers’ approach, governments at all levels would face the prospect of having to pay private property owners whenever public officials need to enter the land — for example, to conduct health and safety inspections, such as home visits by social workers or to inspect coal mines, railroads or drug manufacturers.