Opinion analysis: A very narrow decision to start the term

On Tuesday, December 10, the Supreme Court issued its ruling in Rotkiske v. Klemm, a messy but ultimately small case arising from the Fair Debt Collection Practices Act. The curious strategic choices by Rotkiske’s lawyers throughout this case all but foretold his loss before the Supreme Court. Given its unique posture, it is doubtful that the case will have any significant impact on FDCPA litigation. 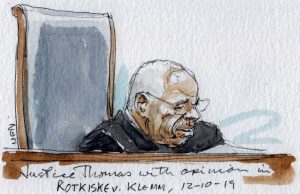 This case began in the U.S. District Court for the Eastern District of Pennsylvania in 2014, when Kevin Rotkiske brought FDCPA claims against Klemm & Associates relating to a default judgment that Klemm obtained against Rotkiske in 2009. In both a 2008 suit that it dropped and the eventual 2009 suit, Klemm served an individual who did not match Rotkiske’s description at an address at which Rotkiske no longer lived. Rotkiske claims he had no knowledge of the suits, but nevertheless Klemm filed in the Philadelphia Municipal Court an affidavit asserting that an “Adult in charge of the Defendant(s) residence” had accepted service.

As several amici in the case, and Justice Ruth Bader Ginsburg’s dissenting opinion, note, Rotkiske’s allegation is of so-called “sewer service”—“intentionally serving process in a manner designed to prevent Rotkiske from learning of the collection suit.” This strategy allows debt collectors and their agents to get default judgments, and subsequently remedies such as wage garnishment, without ever having to face a real defense from consumer defendants. Rotkiske eventually argued that sewer service amounts to a kind of procedural fraud that should create an equitable exception to the FDCPA’s statute of limitations. Unfortunately for Rotkiske, eight justices believed that he had waived that argument in his appeal before the U.S. Court of Appeals for the 3rd Circuit and had not raised it in his petition for certiorari.

Instead, Rotkiske’s petition for certiorari asked “[w]hether the ‘discovery rule’ applies to toll the one (1) year statute of limitations under the Fair Debt Collection Practices Act.” The statute of limitations in the FDCPA, found at 15 U.S.C. § 1692k(d), provides that all actions arising under the statute must be brought “within one year from the date on which the violation occurs.” In many instances, the background discovery rule modifies statutes of limitations so that they do not begin running until the victim discovers that the wrong has occurred. The justices found that there were two ways to interpret Rotkiske’s question:

The justices unanimously agreed that there is no blanket discovery rule that applies to all cases arising under the FDCPA. Writing for the majority, Justice Clarence Thomas explains that the court is required to begin and end its interpretation of the FDCPA’s statute of limitations with the text of the statute if the text is unambiguous. He then turns to Webster’s New International Dictionary (Second Edition) for definitions of the words “violation” and “to occur.” Finding no room for a blanket discovery rule in either definition, the opinion holds that “[t]he FDCPA limitations period begins to run on the date the alleged FDCPA violation actually happened.”

In explaining why the court cannot read a blanket discovery rule into the statute, Thomas looks to his former colleague Justice Antonin Scalia. He quotes Scalia’s concurrence in TRW Inc. v. Andrews, in which Scalia called the discovery rule “bad wine of recent vintage.” Thomas then turns to Scalia and Bryan Garner’s book, “Reading Law: The Interpretation of Legal Texts,” to support the claim that “[i]t is a fundamental principle of statutory interpretation that ‘absent provision[s] cannot be supplied by the courts.’” Thomas explains that such “atextual” supplementation is particularly troublesome “when, as here, Congress has shown that it knows how to adopt the omitted language or provision.” He goes on to point out that when Congress passed the FDCPA, it had already passed several statutes containing discovery rules.

Turning to the question of whether there is a “fraud-specific” discovery rule that is distinct from the general doctrine of equitable tolling but that is nonetheless equitable, the majority found that Rotkiske had failed to preserve this question in the 3rd Circuit or raise it in his petition for certiorari. The opinion, therefore, explicitly declines to decide “whether the text of 15 U.S.C. § 1692k(d) permits the application of equitable doctrines or whether the claim raised in this case falls within the scope of the doctrine applied in Bailey and its progeny,” cases in which, Rotkitske argues, the court adopted “an equitable doctrine that delays the commencement of the statute of limitations in fraud actions.”

Although she agreed with the majority’s interpretation of the FDCPA, Justice Sonia Sotomayor wrote separately “to emphasize that this fraud-specific equitable principle is not the ‘bad wine of recent vintage’ of which [her] colleagues speak.” She then catalogued the cases in which the Supreme Court has applied an “equitable discovery rule” in cases of “fraud or concealment.” Nevertheless, she agrees with the majority that Rotkiske did not preserve this argument below.

On the question of whether Rotkiske properly raised an argument for a fraud-specific discovery rule in his petition for certiorari, Ginsburg finds the question presented sufficiently broad to include the claim, although she notes that it is “hardly a model of the deft pleader’s art.”

On the merits of whether there is a fraud-specific discovery rule that covers Klemm’s alleged sewer service, Ginsburg turns to Justice Joseph Story’s explanation that “‘every statute is to be expounded reasonably, so as to suppress, and not to extend, the mischief[s] which it was designed to cure.’” Ginsburg would hold that fraud creates an implied exception to the FDCPA’s statutory limitations period to avoid incentivizing and protecting intentionally incorrect service of process.

Given that future litigants can avoid the holding of this case by more clearly pleading that there is a fraud-specific exception to the FDCPA’s statute of limitations, it seems unlikely that this case will have any significant impact on FDCPA practice. I would not be surprised if we see this issue before the Supreme Court again soon, albeit in a better vehicle, because the question of the applicability of equitable exceptions to the FDCPA’s statute of limitations remains unresolved.