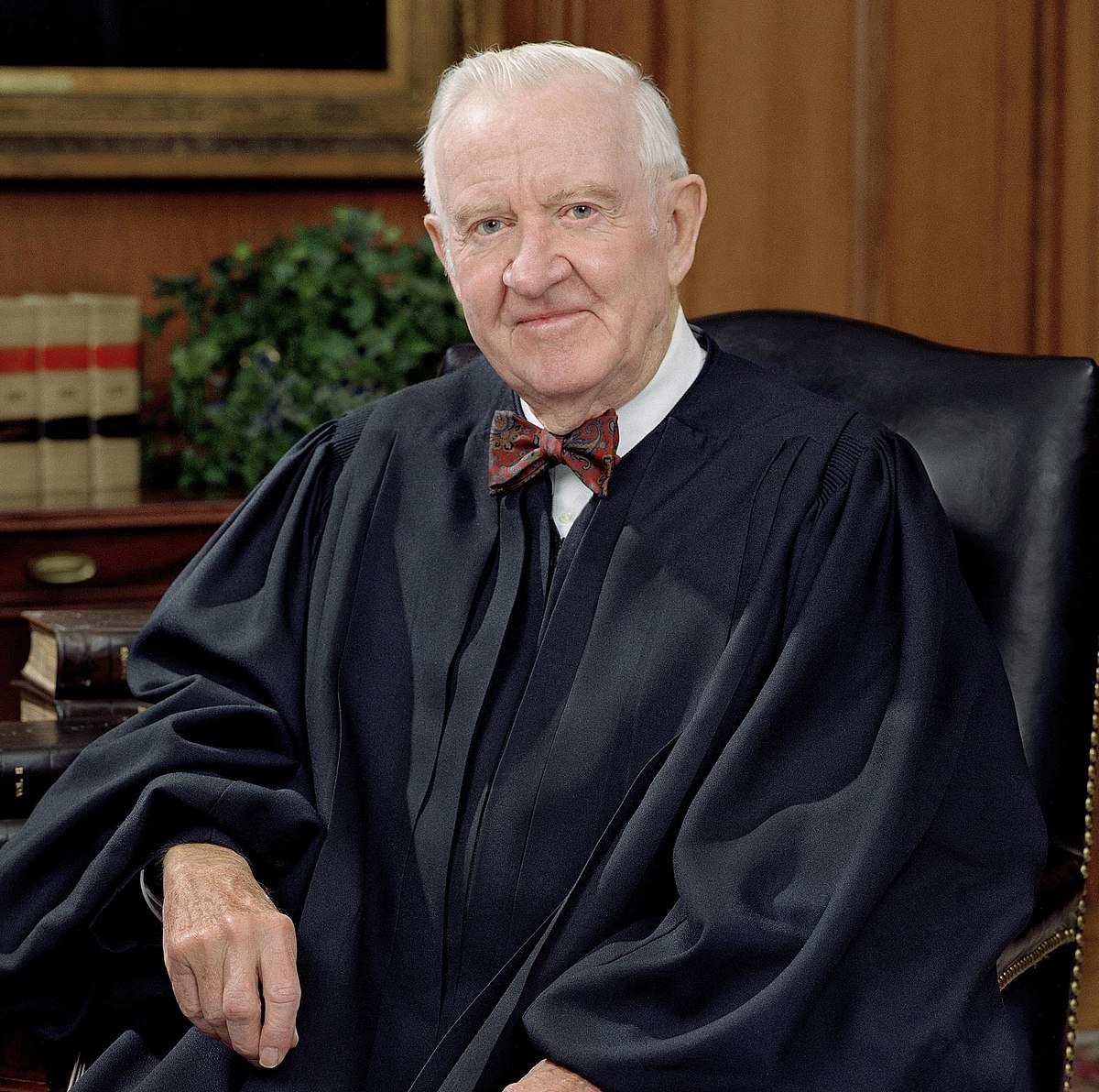 The justices have released statements addressing the death of Justice John Paul Stevens. We reproduce the full texts of those remarks below the jump:

On behalf of the Court and retired Justices, I am saddened to report that our colleague Justice John Paul Stevens has passed away. A son of the Midwest heartland and a veteran of World War II, Justice Stevens devoted his long life to public service, including 35 years on the Supreme Court. He brought to our bench an inimitable blend of kindness, humility, wisdom, and independence. His unrelenting commitment to justice has left us a better nation. We extend our deepest condolences to his children Elizabeth and Susan, and to his extended family.

Virginia and I were deeply saddened to learn of the passing of Justice Stevens. In almost two decades as colleagues on the Court, he was an unfailingly collegial, courteous, and kind colleague. Since his retirement, we have missed him greatly as a member of the Court, and now will miss him even more profoundly as a friend.

From my first year at the Court, Justice Stevens was my model for all a collegial judge should be. Circulations from other chambers invariably took precedence over all else on his work table. His manner at oral argument typified both his civility and the quality of his mind. He preceded his questions with the politest “May I . . .,” then invited advocates to train their attention on the issue likely to be dispositive.

In a Capital City with no shortage of self-promoters, Justice Stevens set a different tone. Quick as his bright mind was, Justice Stevens remained a genuinely gentle and modest man. No jurist with whom I have served was more dedicated to the judicial craft, more open to what he called “learning on the job,” more sensitive to the wellbeing of the community law exists (or should exist) to serve.

In a letter applauding Justice Stevens on the 30th anniversary of his appointment to the Court, President Gerald Ford commented that Supreme Court nominations are seldom considered when historians assess Presidencies. “Let that not be the case with my Presidency,” Ford continued, “[f]or I am prepared to allow history’s judgment to rest (if necessary, exclusively) on my nomination . . . of Justice John Paul Stevens to the U.S. Supreme Court.” I am among the legions of lawyers and judges who would concur heartily in President Ford’s praise for the “dignity, intellect[,] and [absence of] partisan political concerns” that characterized Justice Stevens’ service on the Court, and to the country.

John Stevens was a superb Justice. He was blessed with a brilliant mind, which he put to the service of his strong humane instincts. When I first came to the Court and thereafter, I found that John was a considerate, helpful, good-natured, and insightful colleague. Those who have read his most recent book will know that he had an adventurous side to his nature as well.

John understood how the rule of law forms a necessary part of our constitutional democracy. He understood that laws are designed primarily to serve those who live under them. His work reveals that understanding. The Nation will long benefit from that work; and he will be long remembered. John’s family, his friends, his colleagues, and the legal community will cherish John’s memory. And I shall very much miss my dear friend, John Paul Stevens.

I will always remember John Paul Stevens as a warm, engaging, and unfailingly cordial colleague who went out of his way to make me feel at home from my first day on the Court. Throughout his long and dedicated career, he brought a penetrating, pragmatic, and distinctively singular intellect to bear on the most important legal issues of the time. Historians will note his many important contributions to the Court’s work, and those of us who had the privilege of knowing him as a person will surely miss him.

Justice Stevens was not only a great public servant, but an extraordinary mentor and role model to me personally. We hit it off from my first day on the Court, when he was the first Justice to welcome me. We must have talked for hours that day. Justice Stevens was impossible not to like: affable, humble, and unfailingly kind. Though we overlapped on the bench for only a year, I learned much of what I know about being a Justice from him. His decency, integrity, and commitment to principle were unparalleled. His body of work reflected his deep regard for the Constitution, unflinching commitment to individual rights, and refusal to ignore even the smallest injustices. Justice Stevens embodied the very best of our common profession, and the Court and our nation will miss him dearly.

I was honored to succeed Justice John Paul Stevens on the Court, and his extraordinary tenure has inspired me ever since. He was one of a kind — a brilliant lawyer with a passion for justice, a person of rare independence who modeled collegiality and valued institutions, a modest man who achieved greatness in both his majority and his dissenting opinions. The Court and this country are far better for his service. And I will miss his counsel and his friendship.

I am very sad to hear about the loss of Justice Stevens. His life and legacy will be remembered as one of dedication to his country with his admirable service to the U.S. Navy and on this Court. Louise and I extend our most heartfelt condolences to his children, grandchildren, and the entire Stevens family.

Like the President who appointed him, Justice Stevens was a patriotic son of the Midwest who performed his constitutional duties with quiet dignity. Justice Stevens’ contributions to the law are immense and will guide this Court’s decisions for years to come. But for those who appeared before him in court or who sat beside him as judges, the most distinctive Stevens quality was his civility. In court, he treated others with extraordinary respect and established an enduring model of decency and courtesy for all judges and lawyers. The Court and the Nation will greatly miss Justice Stevens. Ashley and I will pray for him and his family.

He was the soul of principle and an irreplaceable friend.

For over 20 years it was my high privilege to be on the Supreme Court with Justice John Paul Stevens. There were just nine of us at the conference table of course, and it was often John who proposed arguments that we simply had to address. He was remarkably well prepared in every case. He was emphatic always in asking this question: Is what the Court about to do fair to the injured party? He was brilliant at interpreting the law in a way to reach what he considered to be the fair result.

We became close personal friends. John had a brilliant mind. He enjoyed discussing literature, sports, history, the law, and endless other subjects. We used to say that we should not visit each other’s chambers too often because once we started to talk it was hard to stop.

He extended a gracious welcome to Mary and me when we came to Washington. This was the beginning of our long friendship. To have this distinguished World War II veteran, this brilliant attorney, this remarkable judge as our close friend gave us new energy and drive to meet the expectations of all of my colleagues.

We send our deepest sympathies to his family, and of course to our own colleagues, who will always remember and always miss John Paul Stevens.