A “view” from the courtroom: From the T-shirt shop to the high seas 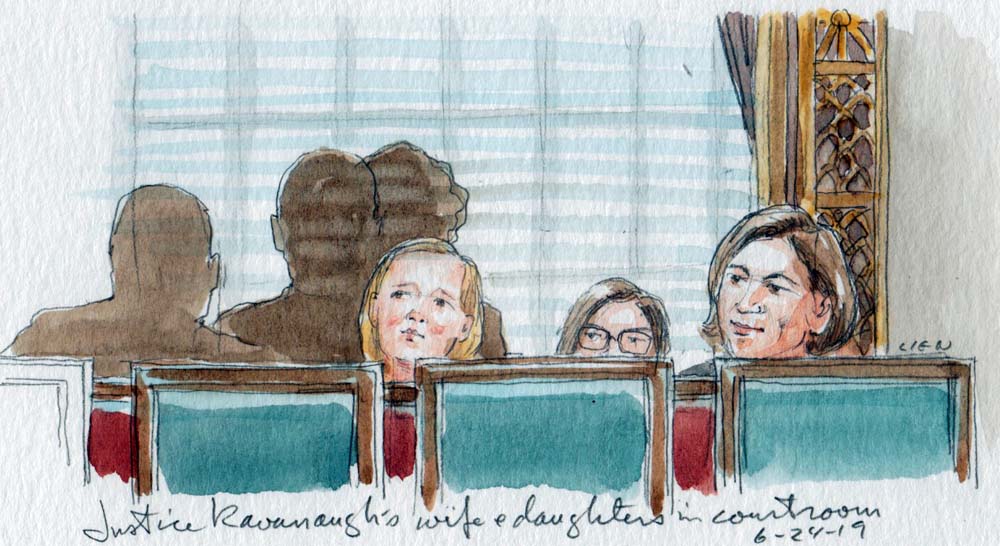 Justice Kavanaugh's wife and daughters seated in the courtroom.
Share

With 12 opinions remaining, no one expects today to be the last day of the court’s term. Still, there is an air of anticipation and some special guests are in the courtroom this morning.

In the public gallery, the second group of high-school teachers from the Supreme Court Summer Institute for Teachers is here. (The first group was here last Monday.) Both groups held moot courts on American Legion v. American Humanist Association, about whether a World War I memorial cross in Bladensburg, Maryland, violates the establishment clause. The institute’s first group of teachers serving as high-court justices ruled overwhelmingly to allow the cross to remain. This past weekend, the second group, even with the benefit of the real Supreme Court’s decision last Thursday in favor of the cross, ruled narrowly against the American Legion and the state of Maryland. Those civics teachers are independent spirits. 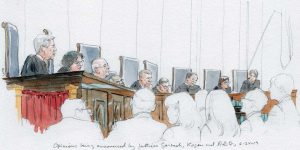 Elsewhere in the public gallery, there is a group of about a dozen or more high school students, ready for a firsthand civics lesson. They will soon be joined in the courtroom by two more pupils. Margaret and Liza Kavanaugh, the daughters of Justice Brett Kavanaugh, arrive with their mother, Ashley, and take their seats in the VIP section. There are many tender ears here this morning. 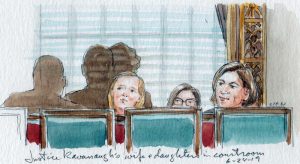 In the press section, this is the time of the year when most regular reporters feel duty-bound to stay in the press room on the ground floor, adjacent to the Public Information Office, where opinions are distributed as soon as a justice begins reading from his or her summary from the bench. That way, reporters may immediately take to Twitter or the web to give their first take on the news.

As Solicitor General Noel Francisco and his team arrive, there is another familiar face that has been in the news in recent days. Michael Dreeben, a longtime deputy solicitor general who specializes in criminal matters, is here today for the first time in quite a while. Dreeben was dispatched to special counsel Robert Mueller’s office for the investigation of Russian interference in the 2016 election.

Dreeben, a 30-year Department of Justice veteran who has argued more than 100 cases before the Supreme Court, is leaving the department in coming weeks, the department’s public affairs office has confirmed. He has not indicated publicly where he is going. (Chief Justice John Roberts recognized Dreeben’s 100th argument in April 2016.)

The court takes the bench, and the chief justice announces that Justice Neil Gorsuch “has the opinion this morning in two cases.”

The first is United States v. Davis, about whether a provision of federal law defining a “crime of violence” for purposes of federal criminal prosecution for using a gun during such a crime is unconstitutionally vague.

Right at the outset of his bench announcement, Gorsuch stresses that the two defendants in the case, who robbed several gas stations in Texas and were convicted of multiple federal crimes, “are going to spend a very long time in prison.”

This nonetheless suggests that he is coming down on the side that the provision is unconstitutionally vague, and that is the holding of the court. Gorsuch explains that Kavanaugh has filed a dissenting opinion, joined in full by Justices Clarence Thomas and Alito, and in part by Roberts.

So, it’s another split between the court’s two newest justices, and another 5-4 decision.

Gorsuch’s second opinion is Food Marketing Institute v. Argus Leader Media, about whether certain commercial or financial information provided to the government qualifies as confidential and thus subject to an exemption from disclosure under the Freedom of Information Act.

The case arises from efforts by a South Dakota newspaper, the Argus Leader, to report on fraud in the federal food-stamp program, which is formally called the Supplemental Nutrition Assistance Program, “or SNAP,” Gorsuch says snappily.

The newspaper sought store-level SNAP data as part of its investigation of retailer fraud in the program, but the U.S. Department of Agriculture withheld the data based on FOIA’s Exemption 4, which shields trade secrets and other privileged or confidential commercial or financial information.

Breyer has filed an opinion concurring in part and dissenting in part, joined by Justices Ruth Bader Ginsburg and Sonia Sotomayor.

The chief justice announces that Justice Elena Kagan has the opinion in Iancu v. Brunetti, about whether the Lanham Act’s prohibition on the registration of “immoral” or “scandalous” trademarks violates the First Amendment. 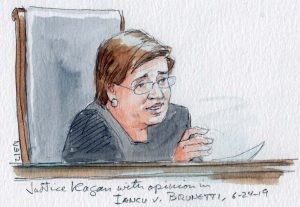 This is when we get anxious about the tender ears of the teenagers and preteens in the courtroom today. The proposed trademark at issue in this highly publicized case is from a line of streetwear founded by Erik Brunetti of California under the name FUCT.

But that name will not be mentioned in the courtroom today. Just as the justices and the arguing counsel did contortions to avoid mentioning Brunetti’s mark or the many variations of vulgarities discussed in the briefs, Kagan keeps her bench announcement at most PG-rated. (She mentions it a mere three times in her written opinion.)

“The most fundamental principle of free speech law is that the government can’t penalize or disfavor or discriminate against expressions based on the ideas or viewpoints it conveys,” she says. “The ban on ‘immoral’ and ‘scandalous’ marks does just that.”

The prohibition “allows trademark registration when a mark’s message conforms with society’s sense of decency or morality,” Kagan continues. “But it prohibits any mark expressing a contrary view—when it goes against that societal sense. That’s exactly the kind of discrimination against ideas that the First Amendment prohibits.”

She adds that if that all sounds a little abstract, “some examples should make the point.”

The anxiety meter goes back up a few degrees, but her examples, drawn from the record and the briefs, stay on the tame side. She cites proposed marks such as “Marijuana Cola” and “You Can’t Spell Healthcare Without THC,” which were rejected by the U.S. Patent and Trademark Office because they glamorize drug use. Yet the PTO approved marks such as “Say No to Drugs” that express an anti-drug message. There are similar viewpoint-based distinctions on trademarks in the areas of religion and terrorism, she says. Those in the courtroom unfamiliar with the case would never guess that it stems from a line of clothing that skateboarders have been wearing for more than 20 years.

Kagan says the court cannot accept the limiting construction proposed at oral argument by Deputy Solicitor General Malcolm Stewart to read the statute to cover only marks that are lewd, sexually explicit or profane.

“But although we try to interpret statutes to avoid constitutional problems, we simply can’t rewrite Congress’s words,” she says.

The final opinion today is from Alito, and we’re moving from the T-shirt shop at the mall to the high seas.

In The Dutra Group v. Batterton, Alito writes for the court that a plaintiff may not recover punitive damages on a claim of unseaworthiness.

The case arises from an accident in which a hatch on a vessel exploded and seriously injured the hand of Christopher Bratton, a deckhand covered by the Jones Act of 1920.

Alito gives a brief history of legal claims protecting seamen, including “maintenance and cure” (which as his written opinion points out goes back to laws promulgated by Eleanor of Aquitaine in 1160) and “unseaworthiness,” which was meant to give sailors under contract to sail on a ship the right to collect their pay even when they refused to board what they discovered to be an unsafe vessel.

As with his discussion of the Yeti last week in his decision in Gamble v. United States, Alito again sprinkles a lively element into his bench announcement.

Think of the “old salt who put his mark to go out to sea on the S.S. Rusty Bucket,” Alito says. “When the sailor sobered up” he saw that this ship was “not very likely to make it to its destination.” Under a seaworthiness claim, that sailor could still collect his wages.

Alito skips ahead a bit and refers to two cases upon which Batterton relies to establish that punitive damages were traditionally available for breach of the duty of seaworthiness.

But upon close inspection, those cases—The Rolph, from 1923, and The Noddleburn, from 1886—do not support the respondent’s argument, Alito says.

The U.S. Court of Appeals for the 9th Circuit is reversed and the case is remanded. Ginsburg has a dissent, joined by Breyer and Sotomayor.

With that, there is an abrupt bang of the gavel by Marshal Pamela Talkin, who announces Wednesday is the next day of departure for the S.S. SCOTUS.