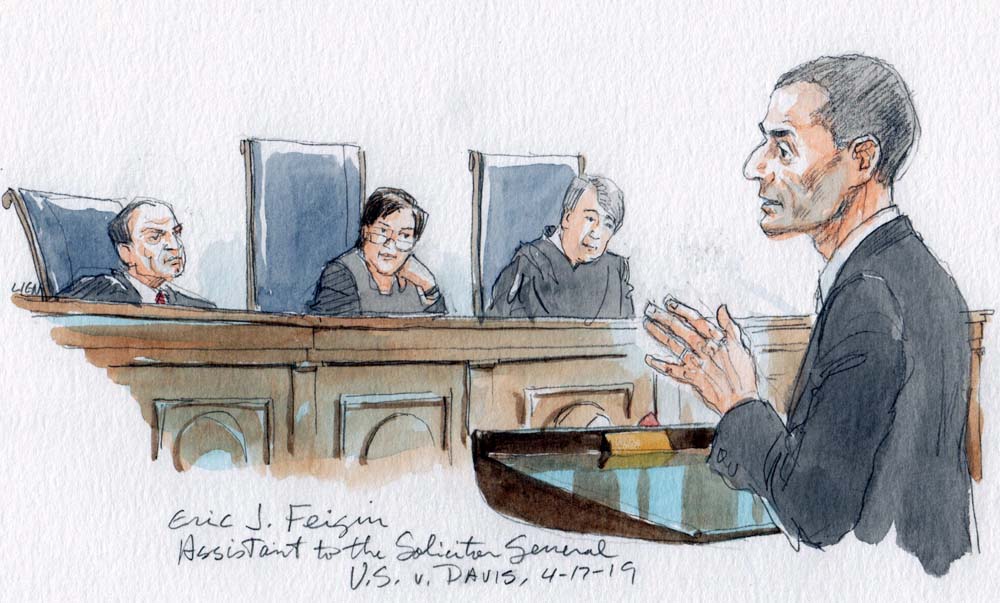 Today the Supreme Court considered “the last Johnson domino to fall” (at least potentially). The case, United States v. Davis, involves the possible implications of the Supreme Court’s 2015 decision in Johnson v. United States. Johnson invalidated the residual clause of the Armed Career Criminal Act, a statute that imposes additional punishment on persons with multiple prior convictions for “violent felonies.” Johnson held that the now-defunct residual clause of the ACCA, which defined a violent felony as an offense that “otherwise involves conduct that presents a serious potential risk of physical injury to another,” was unconstitutionally vague. After ACCA’s residual clause came Section 16(b), the federal criminal code’s general definition of “crime of violence,” which the court invalidated in Sessions v. Dimaya.

Davis involves judgment day for Section 924(c). Section 924(c) prohibits the use of a firearm in furtherance of a “crime of violence” or drug-trafficking crime. The provision defines a crime of violence as “an offense that by its nature, involves a substantial risk that physical force against the person or property of another may be used in the course of committing the offense.” That provision is worded exactly the same way as Section 16(b), which the court invalidated in Dimaya. The two provisions have also been interpreted the same way—using the “categorical approach,” under which courts identify a crime’s “ordinary case” and then assess whether the crime, in that “ordinary case,” poses a substantial risk of force. In Johnson and Dimaya, the court concluded that the categorical approach to interpreting ACCA and Section 16(b) contributed to the vagueness of the provisions. Therefore, in Davis, the government is urging the court to kill the categorical approach in order to save Section 924(c).

From the outset, it was clear that the justices wanted Eric Feigin, the assistant to the solicitor general representing the government, to offer a reason why they should abandon the categorical approach other than to allow the court to uphold Section 924(c). They wanted to hear why Section 924(c) is better interpreted, as a matter of statutory construction, to turn on the specific facts of a particular case, rather than on questions about the “ordinary case” of an offense. Justice Sonia Sotomayor’s first question for Feigin was what Congress “intended in 1986” when it enacted Section 924(c). She pointed out that when Congress enacted that provision, it used the same language as Section 16(b), which had already been interpreted to require the categorical approach. 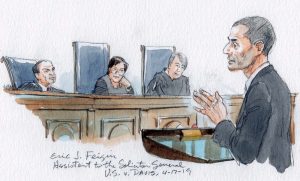 The justices must not have been satisfied with Feigin’s response to Sotomayor’s question, because many of the questions that followed focused on this same issue—why, under ordinary principles of statutory interpretation, Section 924(c) did not focus on the “ordinary case” of a particular offense. Justice Neil Gorsuch demanded to know why Feigin could interpret the same word in the introductory clause of Section 924(c)(3) (“offense”) to mean one thing (the ordinary case of an offense) in Section 924(c)(3)(A) and another (the specific facts of a case) in Section 924(c)(3)(B). Gorsuch called that “a problem” for the government’s position and appeared frustrated with Feigin’s responses. At one point he declared “I’m not tracking you at all,” and at other points directed Feigin to “focus on this statute.”

Justice Elena Kagan jumped in to ask “further questions about the language of the statute.” Whereas Sotomayor referred to legislation that the enacting Congress may have had in mind, Kagan pointed out some recently proposed legislation that would amend Section 924(c) to refer to “the facts underlying the offense.” That is not, she noted, what Section 924(c) currently says. And Section 924(c) contains other language, such as the phrase “by its nature,” that seems to focus on the ordinary case of an offense, rather than the particular facts of an offense. Kagan also did not seem impressed with Feigin’s responses to her questions.

Justice Samuel Alito came to Feigin’s rescue, expressing interest “in the practical implications of our decision in this case,” and inviting Feigin to lay out the parade of horribles that the government had previewed in its brief about the other statutes that might be invalidated or the criminals who might be set free. Justice Brett Kavanaugh also asked Feigin to say more about “one of your points,” “that this was going to significantly lower the sentences of many violent criminals.”

Both Chief Justice John Roberts and Gorsuch quickly indicated that they were not particularly troubled by these practical concerns. Roberts noted that he would not have argued, as the government did, that “all these other [statutes] are going to fall” if Section 924(c) does, and would have argued instead “that there are plausible distinctions in these other cases.” Gorsuch pointed out that many of the defendants subject to Section 924(c) might receive similar sentences at resentencing or be charged for the predicate crime of violence.

By the time Davis’ lawyer, Brandon Beck, stood up, it was clear that at least three, and perhaps five, justices were already inclined to rule for him. Aside from a curious exchange with Gorsuch, Beck did not appear to lose any of these potential votes. 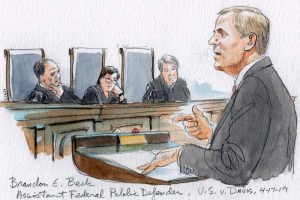 Consistent with their questioning of the government, Kavanaugh and Alito were the most skeptical of Beck’s position. Kavanaugh expressed the view that the concerns about the Sixth Amendment’s guarantee of a right to a jury trial that had led the court to interpret other statutes using the categorical approach did not apply to Section 924(c). Whereas other statutes involved prior convictions, Kavanaugh pointed out, Section 924(c) concerns the offense with which a defendant is currently charged. After managing his way through that exchange, Beck faced some skeptical questioning from Alito. Alito asked why Congress would have selected an “absolutely unworkable” approach to interpreting a statute instead of an “entirely workable one.” Beck began his answer by referring to the presumption of constitutionality before getting around to the text of Section 924(c).

Generating laughs at two different points in his question, Breyer asked Beck, as he has asked advocates in other cases, to “tell me why I’m wrong.” Breyer, one of the architects of the U.S. Sentencing Commission, wanted to know why courts could not ascertain whether a crime involved a risk of force by “look[ing] at [all] the pre-sentence reports.”

The curious exchange occurred when Gorsuch maintained that Davis presented the “unusual case” in which two canons of statutory interpretation that often lead to the same conclusion point in different directions. Gorsuch observed that the canon of constitutional avoidance, under which courts should attempt to interpret statutes to avoid invalidating them as unconstitutional, favors the government, while the rule of lenity, under which courts interpret ambiguity in criminal statutes against the government, favors Davis. “Have you done any study or examined how historically those two canons, when they compete, are reconciled?” Beck eventually said he had not, at which point Gorsuch told him to “go on to another question” because “you’ll do better work elsewhere.”

By the end of the argument, it was clear that at least three justices, and quite possibly five, are not inclined to abandon the categorical approach in order to save Section 924(c). The only question seems to be whether Breyer will join them, or whether Gorsuch will find something in “Joseph Story,” which he called “a pretty good source,” or “The Commentaries of the Constitution or Blackstone” that would direct him to apply the canon of constitutional avoidance (assuming the text is sufficiently ambiguous) instead of the rule of lenity. The last Johnson domino appears ready to fall, after all.