The Supreme Court heard oral argument yesterday in the case of an African-American death-row inmate in Mississippi who was convicted by a jury that included just one African-American juror. The inmate, Curtis Flowers, argues that the jury selection in his case violates the Constitution – especially because the lead prosecutor had a long history of eliminating potential African-American jurors from the jury pool. After nearly an hour of oral argument that included the first questions by Justice Clarence Thomas since 2016, there seemed to be at least five justices who agree with Flowers.

When Flowers went to trial in 2010, it was the sixth time that he had been tried for the 1996 murders of four people in a Mississippi furniture store. He was convicted and sentenced to death at the first two trials, but those convictions were reversed by the Mississippi Supreme Court, which found that the lead prosecutor, Doug Evans, had engaged in intentional misconduct.

Evans served as the lead prosecutor at the next four trials. Flowers was again convicted and sentenced to death at the third trial, but the Mississippi Supreme Court overturned his convictions: It ruled that Evans had violated Batson when he used all 15 of his peremptory strikes to remove African-American members of the jury pool.

Arguing for Flowers, lawyer Sheri Johnson told the justices that the “only plausible interpretation of all of the evidence viewed cumulatively is that Doug Evans began jury selection in” the sixth trial “with an unconstitutional end in mind”: “to seat as few African American jurors as he could.”

Although Johnson emphasized Evans’ history of striking potential African-American jurors throughout the six trials in Flowers’ case, much of the oral argument was spent grappling with the specifics of Evans’ strikes in the sixth trial, and in particular some potential jurors’ relationships with the victims and their families and the extent to which Evans had questioned the would-be jurors about potential biases.

Justice Samuel Alito, perhaps the justice who is most often supportive of the prosecution, kicked off this discussion. Alito acknowledged that the “history of this case prior to this trial is very troubling.” But did the sixth trial, standing alone, he asked Johnson, violate Batson?

Johnson replied that it did, describing the evidence of discrimination as “clear and convincing.”

But Alito was less convinced. He pushed back with facts suggesting to him that Evans had non-discriminatory reasons to strike some of the African-American jurors.

Perhaps most crucially for Flowers, Justice Brett Kavanaugh suggested that he regarded Evans’ track record as problematic: “We can’t take the history” of Batson violations “out of the case,” Kavanaugh told Jason Davis, who argued on behalf of the state, as Kavanaugh noted that Evans had removed 41 of 42 potential African-American jurors from the jury pool during Flowers’ trials. 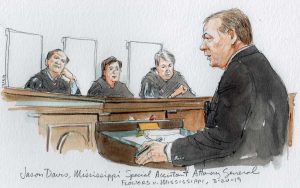 Justice Stephen Breyer chimed in, reciting the history of the African-American jurors whom Evans had removed during the first four trials. In light of that history, Breyer told Davis, “I don’t think it’s going to take much” more in the sixth trial to show a Batson violation.

Kavanaugh spoke out even more strongly later. He told Davis that the “critical sentence” in the court’s opinion in Batson was that you “can’t just assume that someone’s going to be favorable to someone because they share the same race.” But given the history of this case, Kavanaugh queried, with Evans striking 41 out of 42 potential African-American jurors, “how do you look at that and not come away thinking what was going on there was” exactly what Batson said prosecutors can’t do?

Chief Justice John Roberts moved to what he clearly regarded as the bigger picture: how to establish a rule that will govern future cases. This case, Roberts observed, “is unusual because you have the extensive history” of misconduct and Batson violations by Evans. But how far back, Roberts asked, should courts look to evaluate a prosecutor’s past misconduct? If the prosecutor had violated Batson once, 20 years ago, is that something that courts should consider now?

Johnson responded that courts should indeed consider it – to a point. Courts should look at it, she argued, but they should also take into account how recently the misconduct happened, “whether it’s on a relatively similar matter, whether the person has the same motive.”

Kavanaugh also asked Davis whether the Mississippi attorney general could (and perhaps should) have decided to prosecute the sixth trial, “preferably in a different county,” which might have removed some of the problems with potential jurors in a small town knowing the victims and the defendant.

Alito picked up on this idea later, perhaps looking for a narrow way for the court to rule for Flowers. “Could we say in this case,” Alito asked Davis, “because of the unusual and really disturbing history, this case just could not have been tried this sixth time by the same prosecutor” because the history makes it too hard to “untangle what happened before from the particular strikes in this case?”

Davis didn’t want to cede this point, telling Alito that “hindsight is 20/20.”

By the time Davis sat down, Johnson apparently felt sufficiently confident in how the argument was going for her client that she planned to forgo her four minutes of rebuttal time.

But then Justice Clarence Thomas, who hadn’t spoken up at oral argument since 2016, had a question. He wanted to know whether Flowers’ trial lawyer had used any of her peremptory strikes – and, if so, what was the race of the jurors whom she had struck.

Johnson responded that the trial lawyer had only used her strikes to remove white jurors from the juror pool, adding that “her motivation is not the question here. The question is the motivation of Doug Evans.”

Sotomayor jumped in, pointing out that, as a result of Evans’ strikes, there was only one potential African-American juror in the jury pool for Flowers’ lawyer to strike anyway.

Oral arguments are not always an accurate predictor of how a case will ultimately turn out. But here, Flowers seemed to have support not only from the court’s four more liberal justices but also from Kavanaugh and perhaps Roberts – which, if true, would give him the five votes needed to reverse the Mississippi Supreme Court’s decision in the state’s favor. A decision in the case is expected by summer.