Empirical SCOTUS: State fault lines that might lead to big cases before the Supreme Court 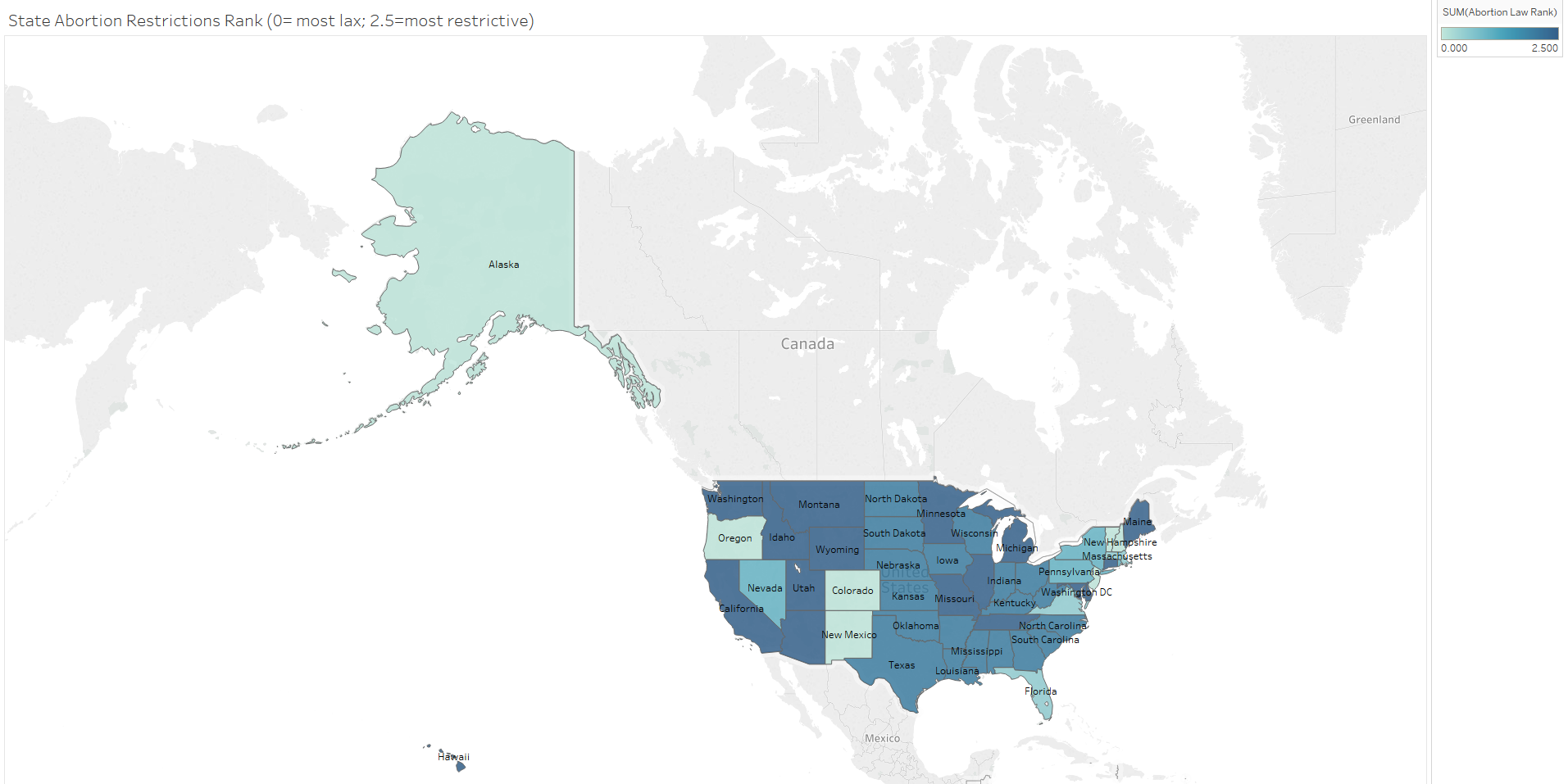 The Supreme Court currently has 43 arguments scheduled for this term. For the most part, these cases will go under the radar. Even cases with large sets of amicus briefs, usually a good sign of generalized interest in issues, do not have the same blockbuster quality as those of recent terms. For example, amici filed nearly 30 merits briefs in the case Weyerhaeuser Company v. U.S. Fish and Wildlife Service. The case deals with the scope of the Endangered Species Act. Although this topic is important, it appeals to a narrow sector of the population. Cases like Masterpiece Cakeshop, Ltd. v. Colorado Civil Rights Commission from last term not only generate a greater number of amicus filings, but also potentially affect more people (although the scope of the Masterpiece Cakeshop decision turned out to be relatively narrow).

This leads to the logical question of what might inspire the Supreme Court’s next set of blockbuster cases. This past week we saw the federal government make a move that might ignite tension across the nation when news surfaced that the Trump administration was looking to focus the language of Title IX on a binary definition of sex as either male or female based on the “genitals that a person is born with.” This refined definition is already drawing backlash from large portions of the public while it is downplayed by others.

Such an interpretation of Title IX could very well lead states to refine laws based on such a definition, and in turn is a potential path to litigation on equal protection grounds. Although the federal impetus would clearly motivate state action, an actual decree at the state or local level would likely catalyze any response. In practice, states’ laws in areas of civil liberties have led to many of the most well-known cases over the past several decades, with issues ranging from same-sex marriages in Obergefell v. Hodges to affirmative action in Fisher v. University of Texas at Austin.

Below are eight issues affecting large swaths of the population and involving laws that vary significantly at the state level. These issues and the state laws in question are potential sparks for litigation in hot-button areas that might very well reach the Supreme Court. Most of these issues have already fostered litigation in the court in recent years and, due to states changing laws and policies, might find their way back to the court sooner rather than later. The issues examined below include: abortion, the death penalty, employment discrimination on the basis of sexual orientation and gender identity, gun-carrying rights, state policies on immigration, marijuana laws, voter ID policies and laws respecting religious freedom.

In this post, one dimension of an area of law is examined for each issue. This means for example that while gun-carrying laws are examined, laws regarding gun ownership are not. This might skew the picture a bit by area but also controls for how courts may differentially analyze similar issues across states. States’ policies in these areas were each scaled from 0 to 3.5 (when applicable due to sufficient gradations in state laws), with zero relating to a liberal approach and 3.5 equating to a more conservative policy.

The current standard on abortion is derived from the 1992 Supreme Court decision in Planned Parenthood of Southeastern Pennsylvania v. Casey, which looked at whether certain abortion regulations placed an “undue burden” on a woman’s right to choose to have an abortion. States’ checkerboard approaches on abortion range from defining a specific timeline within which abortions are legal to more open-ended standards.

Information from the Guttmacher Institute helps to delineate state-level abortion policies focusing on the timeframes when abortions are permissible. One area of ambiguity in states’ laws, however, derives from the fact that many states’ policies are predicated on viability of the fetus and yet there is little consensus on when a fetus is actually viable. Some of the clearly more liberal policies like that in Rhode Island use a 24-week marker as the deadline. In Virginia’s case the threshold is extended until the third trimester, while other states like Mississippi set the threshold at 20 weeks. Not long ago, legislators in Mississippi tried to pass a law that prohibited abortions after 15 weeks, but a federal judge blocked this law from going into effect. Still, multiple states have bills pending that might curtail the availability of abortions, including a potential ban on abortions in Louisiana after 15 weeks and a ban in Iowa on abortions after a fetal heartbeat is detected. Tennessee also has a bill pending that would prohibit the use of state funds to support abortions. As state laws that use viability as the threshold for abortion run the gamut in practice from quite strict to relatively loose, these were coded as conservative based on the theoretical possibility that they can be used to justify banning abortions at early stages in a pregnancy.

The map of state policies based on the Guttmacher Institute’s coding is as follows: 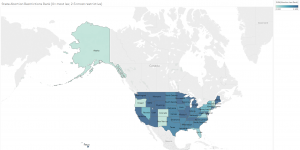 Voter ID requirements vary considerably across states as well. The court held in Crawford v. Marion County that an Indiana law requiring photo IDs at polling stations was constitutional. Now laws range from not requiring identification on the liberal end of the spectrum to requiring photo IDs on the more restrictive end. Many other bills on this issue are currently percolating within state legislatures. Data on Voter ID laws are available on the National Conference of State Legislatures website. 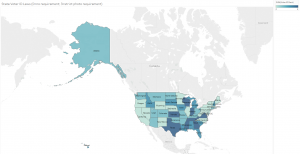 State death penalty laws frequently lead to litigation, and often this litigation makes its way to the Supreme Court. As recently as its October 2015 term, the Supreme Court held Florida’s capital-sentencing scheme unconstitutional in Hurst v. Florida. The court has two death-penalty-related cases this term, with Bucklew v. Precythe and Madison v. Alabama, though neither looks at a state’s overall death penalty policy. State laws now range from abolishing the death penalty to using multiple methods for executions. Data from the NCSL and from Findlaw was pooled to generate this map on death penalty policies.

Employment discrimination based on gender identity and sexual orientation

There is no universal standard for states’ policies on employment discrimination based on gender identity and sexual orientation. This is an issue not often confronted by the Supreme Court but one that could very well arise in the near future. The court did recently deal with employment discrimination based on gender in Young v. UPS and almost heard a case regarding a dispute on transgender use of bathrooms in Virginia schools in Gloucester County School Board v. G.G., before the Trump administration changed the direction of the relevant federal policy. State laws ranging from least to most protective as identified by the Human Rights Campaign are as follows: 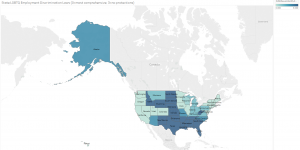 Gun laws are another area that split the states. While states have a variety of laws that regulate gun ownership and use, the focal laws for this analysis deal with the settings in which individuals can lawfully carry guns within a state. The court upheld the federal right to gun possession in District of Columbia v. Heller and reaffirmed this right vis-à-vis state laws in McDonald v. City of Chicago. State laws now vary from freely permitting the open carry of guns to prohibiting open carry altogether. Several states are also currently looking to broaden their gun-carrying policies. State gun laws were identified for this map based on coding from the Giffords Law Center. 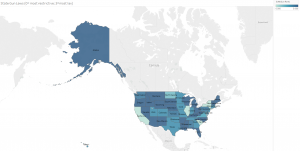 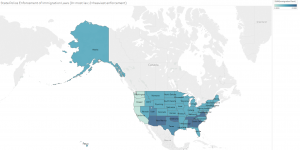 The intensely followed issues that arise when religious liberty is pitted against antidiscrimination laws and other regulations will almost assuredly end up once again before the Supreme Court. The court held in favor of a company’s religious liberty in Burwell v. Hobby Lobby Stores, and later held for the religious rights of a baker over those of a same-sex couple seeking a wedding cake in last term’s Masterpiece Cakeshop. Multiple states have Religious Freedom Restoration Act laws in place that protect religious liberty under a strict-scrutiny standard. Some non-RFRA states still protect this type of religious liberty through court decisions, while others have no such laws in place. Information on religious liberty laws is obtainable through the NCSL and Findlaw. 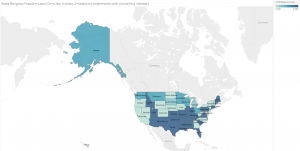 Marijuana legalization is another issue that may come before the Supreme Court in the near future, especially if Congress does not legislate on the topic and states continue to vary in their practices. States range from allowing marijuana in very limited instances to legalizing marijuana for recreational use. This leads not only to disparate practices across states but also to traffic of marijuana between states with different levels of marijuana prohibitions. Information on marijuana laws and restrictions is obtainable through the NCSL. 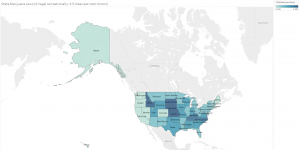 The scores in the eight areas were aggregated to create an overall index that runs from more liberal to more conservative. The ideological difference in state policies across these issue areas is shown below. 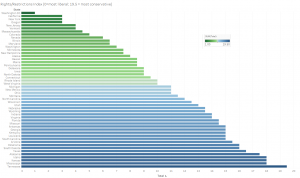 The lines above show the ideological valence of a state’s laws and not the likelihood that a state law will be challenged. Laws on both sides of the spectrum may be challenged depending on when rights are curtailed, so that restrictive gun laws may be challenged but so may restrictive abortion laws — even though one equates to a more liberal policy and the other to a more conservative policy.

Although the justices ultimately control their docket, these are some of the areas in which state laws vary widely. Attacks on state laws in these areas could well lead to litigation that reaches the upper echelons of U.S. courts. Because the Supreme Court often reviews cases that split the lower courts across the country, cases in these areas may well spur some of the next great battles before the justices.