You can now download the final SCOTUSblog Stat Pack for October Term 2017 here. This year, the 45-page Stat Pack includes information about, among other things, the rate of unanimity, the opinions written by Justice Anthony Kennedy in his last term, agreement among different justices, the distribution of majority opinions by senior justice, which justices asked the most questions at oral argument, and the advocates who argued the most frequently during the term.

Below you can view each section of the Stat Pack individually and review our key takeaways from the Stat Pack.

We would like to thank all of the individuals who provided comments and feedback on the Stat Pack throughout the term. Our Stat Pack is compiled as a labor of love, and once again the SCOTUSblog community has been hugely influential in shaping the content and design of our statistics. If you have any comments, suggestions or corrections, please do not hesitate to send me an email.

Below is the breakdown of opinions for each justice: 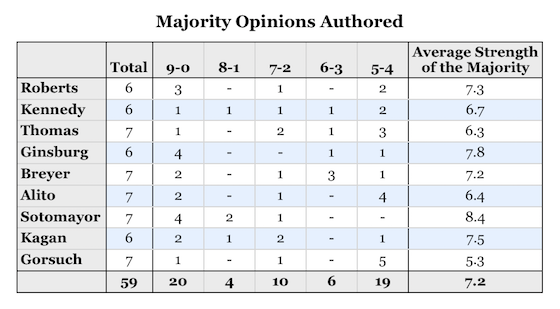 Sotomayor was the least likely to appear in the majority, casting majority votes in 50 out of 73 cases (68.5%). This is the sixth highest rate of dissent by a justice in a single term during the Roberts court era: 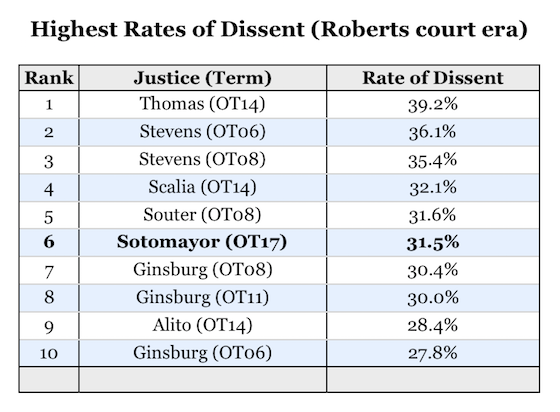 Justice agreement: The two justices with the highest agreement rate during OT17 were Justices Ruth Bader Ginsburg and Sotomayor (95.8%), followed by the pairs of Justices Clarence Thomas and Samuel Alito (93.0%) and Justices Stephen Breyer and Elena Kagan (92.6%). The pair with the lowest rate of agreement was Alito and Sotomayor (49.3%). Alito and Sotomayor are the first justices since OT08 to finish the term with an agreement rate below 50 percent, meaning they are more likely to disagree than agree on the outcome of a case. In OT08, Justice John Paul Stevens had an agreement rate below 50 percent with Justices Antonin Scalia, Thomas and Alito. See Stat Pack, page 26.

This term also saw the fewest oral argument appearances by women since we began tracking that statistic in OT10, 19 (12%). See Stat Pack, page 33.