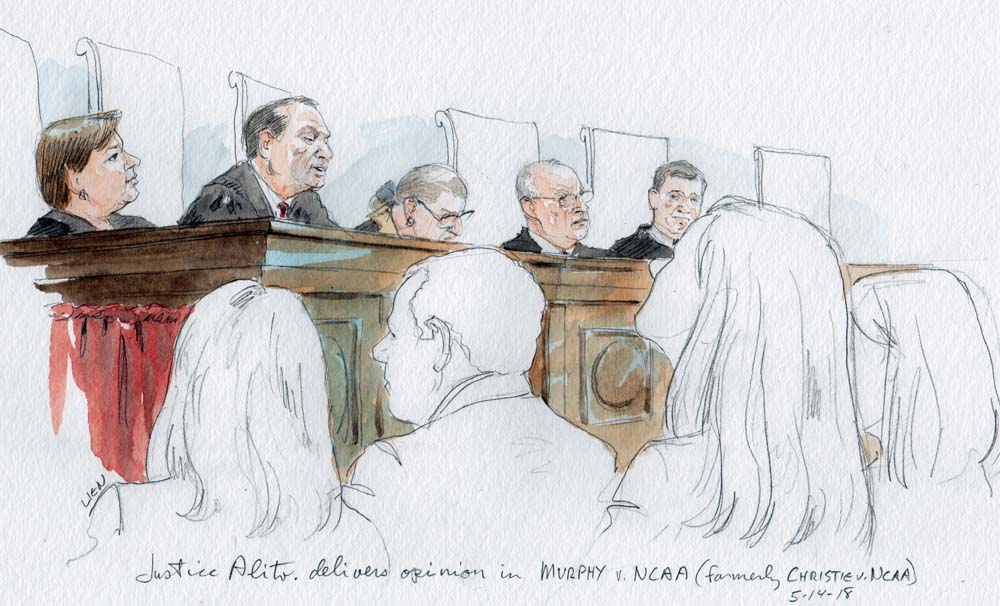 11:31 a.m. (updated at 3:19 p.m.): Amy Howe analyzed the opinion in Murphy v. National Collegiate Athletic Association, in which the Supreme Court struck down a federal law that prohibited the states from legalizing sports gambling.

11:42 a.m. (updated at 4:18 p.m.): Amy Howe analyzed the opinion in McCoy v. Louisiana, in which the Supreme Court threw out the conviction and death sentence of a Louisiana inmate whose attorney had conceded the inmate’s guilt to the jury over the inmate’s explicit objection.

12:07 p.m. (updated at 5:03 p.m.): Amy Howe analyzed the opinion in Byrd v. United States, in which the Supreme Court ruled that a driver who has permission to use a rental car is generally entitled to the same protections under the Fourth Amendment as the driver who rented the car.

12:51 p.m.: Amy Howe reported on today’s orders, including the grants for next term in BNSF Railway Company v. Loos and Air and Liquid Systems Corp. v. Devries and the call for the views of the solicitor general in Osage Wind, LLC v. Osage Mineral Council.

2:39 p.m.: Howard Wasserman analyzed the opinion in United States v. Sanchez-Gomez, in which the Supreme Court held that an appeal involving a federal district-wide policy of shackling defendants during pretrial proceedings became moot when the defendants’ criminal cases ended before the appeals court could render a decision.