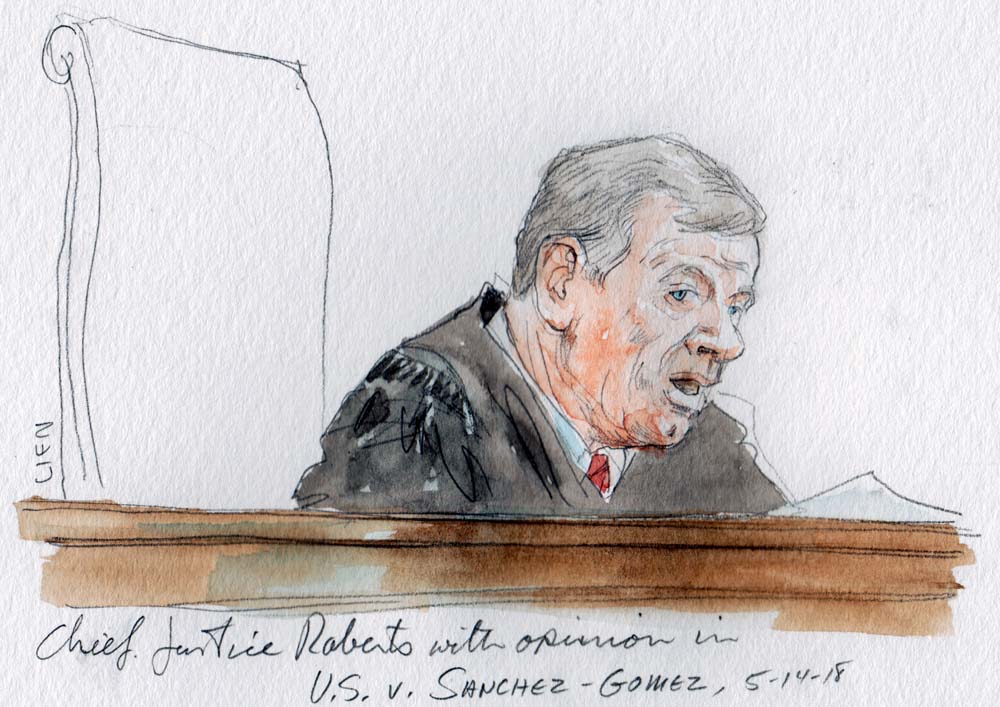 The U.S. District Court for the Southern District of California, at the suggestion of the U.S Marshal, adopted a district-wide policy allowing marshals to produce all in-custody pretrial defendants in full five-point restraints for most nonjury proceedings. In full restraints, a defendant’s hands are closely handcuffed together, these handcuffs are connected by a chain to another chain running around the defendant’s waist, and the defendant’s feet are shackled and chained together. Four defendants challenged the constitutional validity of their shackling and of the policy as a whole. They argued that they were bringing the challenges on behalf of themselves and similarly situated defendants. The district court denied their challenges. While the cases were on appeal to the U.S. Court of Appeals for the 9th Circuit, the four prosecutions were resolved, either via guilty plea or dismissal. 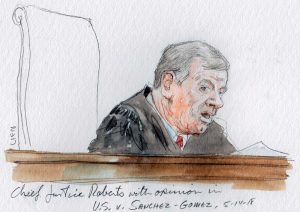 The question for the Supreme Court was whether resolution of the four prosecutions eliminated any live controversy, rendering the dispute moot. In concluding that the case was moot, the court rejected the 9th Circuit’s recognition of “class-like claims” as a means to avoid mootness absent certification of an actual class under Federal Rule of Civil Procedure 23. The court also rejected the respondents’ argument that the controversy was not moot because it was “capable of repetition yet evading review.”

Precedents such as Gerstein v. Pugh and Sosna v. Iowa establish that plaintiffs in class actions can avoid mootness when the named plaintiffs’ claims become moot, because the unnamed class members still have their personal stakes in the matter, retaining a live controversy with the defendants. But the Supreme Court declined to endorse the 9th Circuit’s creation of a “freestanding exception to mootness outside the class action context.” The class action is a unique device, a product of the Federal Rules and an exception to the “usual rule that litigation is conduct by and on behalf of the individual named parties only.” A certified class “acquires a legal status separate from the interest asserted by the named plaintiff” and the class’ “independent legal status” is essential to avoiding mootness. But no similar mechanism applies in this case. This was not a civil action, so there was no class certification. The Federal Rules of Criminal Procedure do not provide a litigation vehicle comparable to the class action, and federal courts lack power to “create de facto class actions at will.” That the respondents purported to seek relief for all in-custody defendants in the district did not create a “functional class action.” A case does not escape mootness because the claims of the parties might, if resolved in some way, benefit other similarly situated individuals.

The respondents argued that their claims remained alive as a controversy that was capable of repetition yet evading review. This exception to the regular rules of mootness applies when litigation (including appeals) cannot be concluded before the challenged action ends of its own force and there is a “reasonable expectation that the same complaining party will be subjected to the same action again.” The respondents argued that they met the second part of this test because the two who had been charged with unlawfully entering the United States had violated the law again by re-entering unlawfully, something the crime’s high recidivism rate suggested was reasonably likely to occur. Once unlawfully in the United States, they would likely be arrested and returned to pretrial custody, where they again would be subjected to the shackling policy. But the Supreme Court “refused to ‘conclude that the case-or-controversy requirement is satisfied by’ the possibility that a party ‘will be prosecuted for violating valid criminal laws.’” In past cases, the court has “‘assume[d] that [litigants] will conduct their activities within the law and so avoid prosecution and conviction as well as exposure to the challenged course of conduct.’”

The court rejected the respondents’ reliance on two cases in which it applied the capable-of-repetition exception to mootness — a disabled student’s challenge to his unilateral suspension from school, when his inability to control his behavior made future misconduct and unilateral suspension reasonably likely to occur, and an indigent civil litigant’s challenge to contempt citations for failure to pay child support, when his steep arrearages (more than $13,000) and looming hearing (five months away) “destined” him to be held in contempt again. In both civil cases, the court reasoned, litigants were unable “for reasons beyond their control, to prevent themselves from transgressing and avoid recurrence of the challenged conduct.” The respondents, on the other hand, “are ‘able—and indeed required by law’—to refrain from further criminal conduct.” That they have an incentive to break the law by unlawfully returning to the United States, and that they are statistically likely to do so, “do not amount to an inability to obey the law.”

The court concluded by acknowledging a point made during oral argument: There are other avenues to challenge the shackling policy, notably a civil action for injunctive relief, including a class action that would allow detainee-plaintiffs to avoid similar mootness problems.