A “view” from the courtroom: Strength in numbers (Corrected) 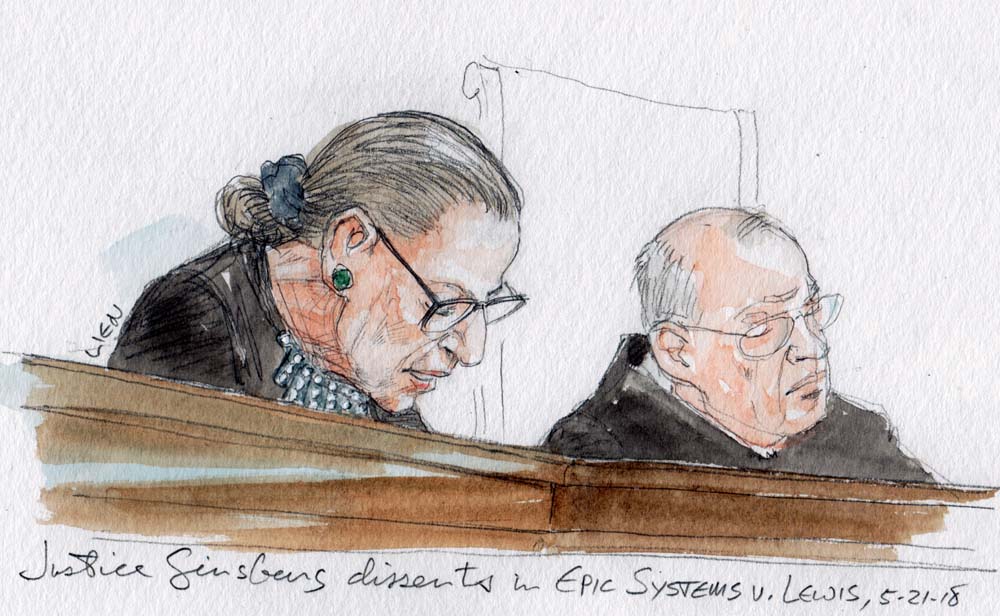 After the court put a major dent in its pending caseload last week, with five relatively significant decisions, including the much-discussed ruling favorable to sports betting in Murphy v. NCAA, the odds on this week’s lone opinion day is that we’ll get fewer decisions.

We had to jump on a plane right after decisions last Monday to get to a conference in Los Angeles, where the weather was sunny and in the 70s. Did it rain here last week?

The court takes the bench at 10 a.m., with Justices Clarence Thomas and Stephen Breyer absent. Justice Sonia Sotomayor has returned to the bench for the first time since her shoulder replacement surgery on May 1. The justice evidently had to cancel her scheduled visit last week to the University of California at Davis, where she was to address the law school commencement, because of her recuperation.

Justice Ruth Bader Ginsburg is wearing her “dissent jabot” this morning, the bejeweled dark collar she showed off in the documentary “RBG.” We’ll soon learn why. 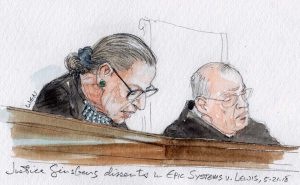 Chief Justice John Roberts opens this morning’s session by welcoming a special guest. “We are very pleased to have visiting with us this morning the chief justice and president of the Supreme Court of Republic of Kenya, David Maraga,” Roberts says. “On behalf of our court, welcome.”

Maraga, seated in the guest box to the left of Roberts, stands about three-quarters of the way and takes a brief bow.

The chief justice (of the United States, that is), then announces that Justice Neil Gorsuch has the opinion of the court in Epic Systems Corp. v. Lewis and its consolidated cases. (Those are Ernst & Young LLP v. Morris and National Labor Relations Board v. Murphy Oil USA, Inc.)

This is one of the major cases of the term, about whether, as the question presented in Epic Systems puts it, “an agreement that requires an employer and an employee to resolve employment-related disputes through individual arbitration, and waive class and collective proceedings, is enforceable under the Federal Arbitration Act, notwithstanding the provisions of the National Labor Relations Act.”

This is a rather plum assignment for a justice who is just completing his first full term in office. Gorsuch dives into his opinion announcement that courts are required under the FAA to enforce arbitration agreements providing for individualized proceedings, and neither a saving clause in that act nor provisions of the National Labor Relations Act suggest otherwise.

He pretty quickly moves to answering the dissent, which “sees things a little differently,” he says, without revealing the author of that opinion. In the dissent’s view, Gorsuch says, the court’s decision “ushers us back to the Lochner era when this court regularly overrode legislative policy judgments.”

“The dissent even suggests we have resurrected the long-dead ‘yellow dog’ contract,” he says, referring to the dissent’s description of the early-20th-century practice of employers’ requiring workers to abstain from joining labor unions.

Gorsuch goes on at some length with his rebuttal of the dissent before noting that Congress can act, as the dissent urges, to “amend” this judgment, but because the court can read Congress’ statutes to work in harmony, “that is where our duty lies.”

Gorsuch announces the lineup, with Roberts and Justices Anthony Kennedy, Thomas and Samuel Alito joining him (with Thomas writing a short concurrence). Ginsburg has written a dissent, joined by Breyer, Sotomayor and Justice Elena Kagan.

There is then the brief, slightly awkward pause when a justice starts reading a dissent. Ginsburg’s dissent from the bench is the second of the term, with Breyer having read from his dissent in Jennings v. Rodriguez on February 27. Those may well not be the last dissents from the bench in this blockbuster term.

Ginsburg methodically reads from her dissenting statement, noting that the individual claims of the employees involved in the three cases are small and various factors would likely dissuade the employees from seeking redress alone. By joining their claims together in collective action, the employees can spread the costs of litigation, lessen fears of retaliation, and gain effective redress for wage underpayment, she says.

But the forced arbitrations agreements block such collective action.

Gorsuch mostly looks down during the dissent. Ginsburg continues.

“Over 80 years ago, Congress recognized that for workers striving to gain from their employers decent terms and conditions of employment, there is strength in numbers,” she says. Congress passed the Norris-LaGuardia Act and the NLRA “to protect workers’ rights to band together when confronting employers about working conditions,” she adds.

She does not mention in her bench dissent her single reference to the “Lochner era” in her written dissent. She concludes by saying, “The inevitable result of today’s decision is that there will be huge underenforcement of federal and statutes designed to advance the well-being of vulnerable workers. Congressional action is urgently needed in order to correct the court’s elevation of the Arbitration Act over workers’ rights to act in concert.”

With no real “Gins-burn” zinger in her statement, some of her colleagues look her way and the chief justice pauses to make sure Ginsburg has finished. She has, so Roberts turns to the next case.

This is a case about a whether a court’s exercise of “in rem” jurisdiction overcomes the jurisdictional bar of tribal sovereign immunity when an Indian tribe has not waived immunity and Congress has not unequivocally abrogated it. That question nonetheless made for an interesting oral argument back in March, on a day when a snowstorm had shut down most of the federal government, but not the court.

The case involves a roughly one-acre strip of land in Washington state, which a family contends it acquired by adverse possession from a larger tract of land later acquired by the Upper Skagit tribe. The family filed a quiet-title action against the tribe, which asserted a defense of sovereign immunity that was rejected by the Washington Supreme Court.

Gorsuch’s opinion holds that a 1992 decision involving Indian tribes, County of Yakima v. Confederated Tribes and Bands of Yakima Nation, addressed only an interpretation of a federal Indian statute and not the scope of tribal sovereign immunity. Because the family’s alternative, common law theory for holding that the tribe cannot assert sovereign immunity emerged late in the case, the justices remand the case to the Washington Supreme Court.

“I will spare you the details, which I promise will bore you,” Gorsuch says from the bench, as he gives a very brief summary of his opinion, which is joined by Roberts, Kennedy, Ginsburg, Breyer, Sotomayor and Kagan. The chief justice has written a concurrence, joined by Kennedy.

Thomas has written a dissent, joined by Alito.

Gorsuch does not repeat a line from the seven-page opinion that counters a criticism by the dissent that his modest opinion has not accomplished as much as it could have.

“The source of confusion in the lower courts that led to our review was the one about Yakima, and we have dispelled it,” Gorsuch writes. “That is work enough for the day.”

Gorsuch has the strength in numbers that he needs in two decisions this morning, and that is work enough for the court on this day.

An earlier version of this post neglected to mention that Justice Anthony Kennedy joined the majority opinion in Upper Skagit.