A “view” from the courtroom: A day for drama on the bench 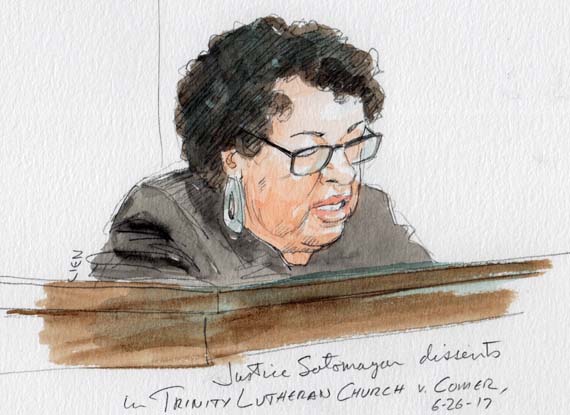 Even in a Supreme Court term that many would agree is the first non-blockbuster in a good five years, the justices have managed to build up some suspense for their season finale this morning.

As we await the justices, Lyle Denniston has joined us in the press section. Normally on opinion days, Denniston stays down in the press room. But he announced last week that he is retiring — once and for all — from covering the court after nearly 60 years working for such outlets as The Wall Street Journal, the Washington Star, the Baltimore Sun, the Boston Globe, SCOTUSblog, the Constitution Daily blog and his own law blog.

Lyle’s wife, Pamela Houghton-Denniston, is here today for the occasion. She is a member of the Supreme Court Bar and is sitting adjacent to her husband, but in that section.

Also in the press section in the courtroom today are two sketch artists — Art Lien of NBC News (and SCOTUSblog) and Bill Hennessy of CNN. We mention this only because we’re afraid that one or both might soon be called away from the court regularly to sketch the White House press briefing, as Hennessy was last week when the briefing was closed to cameras.

Meanwhile, across the room in the VIP section, Virginia Thomas, Justice Clarence Thomas’s wife, arrives. She is soon followed by Jane Roberts, the wife of Chief Justice John Roberts, and their two children, Josie and Jack. Joanna Breyer, the wife of Justice Stephen Breyer, also files into the section. But Mary Kennedy, the wife of Justice Anthony Kennedy, is a no-show, even though she is no stranger to the courtroom, especially on the last day of the term.

This is probably one more indication that no retirement announcement is coming from Justice Kennedy this morning. (And we have been a bit dubious that any such announcement would come from the bench. We can’t think of a retiring justice in recent decades who first disclosed his or her retirement in the courtroom.)

The justices take the bench about a minute or two late this morning. The chief justice announces that Thomas has the opinion for the court in Davila v. Davis. Thomas briefly describes the background of the case before using a favorite phrasing of his to announce the holding: “In an opinion filed with the clerk today …” This formulation, which makes it seem as though you are witnessing the law change at that very moment, was employed by a number of past justices but has fallen out of favor with Thomas’ current colleagues.

Thomas says that because a prisoner does not have a constitutional right to counsel in state postconviction proceedings, ineffective assistance in those proceedings does not qualify as cause to excuse a procedural default. The decision is 5-4 along the court’s conservative-liberal divide.

Kennedy is up next with the opinion in California Public Employees’ Retirement System v. ANZ Securities Inc. As soon as Kennedy mentions the word “retirement” in the name of California’s largest public-pension fund, we can practically hear the jokes emanating from the press room about Kennedy’s discussing retirement from the bench.

The decision is another 5-4 one along the conservative-liberal divide, with the majority holding that CalPERS’ untimely filing of its complaint more than three years after the relevant securities offering is ground for dismissal.

Kennedy, who had been leaning forward to inspect the pages of his summary as Thomas spoke and remained there while he delivered it, now leans back in his chair and seems relaxed.

Roberts announces that he has the opinion in Trinity Lutheran Church of Columbia Inc. v. Comer, except that he has only a judgment of the court with respect to Footnote 3, he says. We can’t wait to read this footnote, but it will remain a mystery as the chief justice recounts the story behind a case that was granted cert way back in January 2016.

He discusses how the “pea gravel” of Trinity Lutheran’s playground that can be “unforgiving” when youngsters fall from the slides, jungle gyms and monkey bars. The church sued after it was denied a grant from Missouri’s Scrap Tire Program based on language in that state’s constitution barring aid to churches.

Roberts summarizes a fair amount of his opinion, concluding with his mention of an 1829 speech by a Maryland legislator who urged that state’s assembly to adopt a bill that would end the state’s disqualification of Jews from public office, which spoke of “persecution” and “an odious exclusion.”

“The Missouri Department of Natural Resources has not subjected anyone to chains or torture on account of religion,” Roberts says. “And the result of the state’s policy is nothing so dramatic as the denial of political office. The consequence is, in all likelihood, a few extra scraped knees. But the exclusion of Trinity Lutheran from a public benefit for which it is otherwise qualified, solely because it is a church, is odious to our Constitution all the same, and cannot stand.”

Jordan Lorence of the Alliance Defending Freedom, which represented Trinity Lutheran, is seated near the front of the thinly populated bar section again today, and he listens intently to the summary.

The chief justice explains the somewhat complicated lineup that includes concurrences by Thomas and Justice Neil Gorsuch, a concurrence in the judgment by Breyer, and a dissent by Justice Sonia Sotomayor, joined by Justice Ruth Bader Ginsburg.

Sotomayor reads from the bench at some length from her 27-page dissent.

“This court has never before, in its 200-year history, allowed a state to turn over taxpayer funds to a house of worship,” she says. “This case is remarkable.”

There are now three merits cases still up in the air. Roberts explains that in one, Hernandez v. Mesa, about the cross-border shooting of a Mexican teenager by a U.S. Border Patrol agent, a per curiam opinion has been issued and that the decision of the court below has been vacated and the case remanded. He explains that Thomas has filed a dissent, as has Breyer, joined by Ginsburg. But we otherwise don’t know in the courtroom what is really going on there.

Next, the chief justice announces that Jennings v. Rodriguez and Sessions v. Dimaya, both dealing with immigration, “are restored to the calendar for reargument.” Those are likely 4-4 ties in cases heard before Gorsuch joined the court.

The chief justice isn’t done. He has saved the announcement regarding the “travel ban” cases for one more dramatic moment in the courtroom.

He announces that the cert petitions in “Donald J. Trump versus International Refugee Assistance Project” and “Donald J. Trump versus Hawaii” are granted, and the government’s stay request is granted in part, with a partial concurrence and partial dissent by Thomas, Justice Samuel Alito, and Gorsuch. Again, there is a per curiam opinion that we don’t immediately have in hand.

Roberts then provides his traditional closing comments, thanking court employees for their outstanding work and dedication. He recognizes two who have retired in recent months: John Boulanger, an IT specialist with 25 years of service with the court, and Yvonne Rogers, a technician with 38 years’ experience.

The chief justice then turns towards the press section to recognize Denniston, citing not only his nearly 60 years of covering the Supreme Court but a career that began in 1948, covering the Otoe County Courthouse in Nebraska City, Neb. Denniston has covered Supreme Court terms that fill more than 200 volumes of the United States Reports, Roberts points out.

Every member of the court is looking Denniston’s way and smiling, including those who rarely if ever look toward the press section.

With that, Marshal Pamela Talkin bangs her gavel and announces that court is adjourned until October as the justices retreat through the curtains, the day’s drama at an end.