Opinion analysis: Immigrant who received bad advice gets another shot at staying in the U.S.

Yesterday the Supreme Court sent the case of a Bosnian Serb woman who was stripped of her citizenship for lying to immigration officials back to the lower courts. The justices rejected the government’s argument that Divna Maslenjak could lose her citizenship simply by making false statements, no matter how trivial. Instead, the court ruled, Maslenjak’s lies can only be held against her if they would have mattered to immigration officials. Today the justices gave another immigrant, Jae Lee, a second chance to stay in the United States after bad advice from his lawyer led him to plead guilty, even though his odds of winning at trial were low and he was likely to be deported anyway. 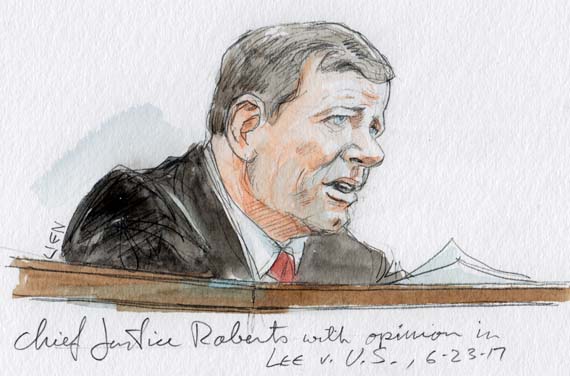 Lee’s saga – which Chief Justice John Roberts, in his opinion for the court, recounted in some detail – began in 2009, when he pleaded guilty to possession of ecstasy with the intent to distribute it and was sentenced to one year and one day in prison. It was only after he pleaded guilty that Lee – who was a lawful permanent resident of the United States – learned that deportation was mandatory for crimes like his. For Lee, who had come to the United States nearly 30 years before, this was a penalty worse than prison: He owned two restaurants in the United States and was the sole caregiver for his elderly parents; by contrast, he no longer had any ties to South Korea, where he was born.

Lee went back to federal court, seeking to overturn his conviction. He argued that when his attorney advised him to take the guilty plea and assured him that he would not be deported, Lee was deprived of his constitutional right to have the assistance of a competent lawyer. The federal government agreed that the performance of Lee’s trial lawyer was deficient. But Lee’s conviction should still stand, the government argued, because the Supreme Court’s 1984 decision in Strickland v. Washington also requires a defendant to show that he was prejudiced by that inadequate assistance. And that, the government contended, Lee cannot do because the case against him was so strong. The U.S. Court of Appeals for the 6th Circuit agreed, holding that “no rational defendant charged with a deportable offense and facing overwhelming evidence of guilt would proceed to trial rather than take a plea deal with a shorter prison sentence.”

Today the Supreme Court reversed. In his decision, which was joined by Justices Anthony Kennedy, Ruth Bader Ginsburg, Stephen Breyer, Sonia Sotomayor and Elena Kagan, Roberts conceded that, in most cases, a defendant will not be able to show that he was prejudiced by taking a guilty plea when the evidence against him is overwhelming. But the court declined to enshrine that generalization in a categorical rule. Both common sense and the Supreme Court’s own case law, Roberts explained, acknowledge “that there is more to consider than simply the likelihood of success at trial.” Instead, Roberts continued, a defendant who is deciding whether to take a guilty plea will also consider the consequences of his conviction – after both a trial and a guilty plea. And the fact that a defendant’s odds of prevailing at trial may be very low does not end the inquiry: When the question is “what an individual defendant would have done,” Roberts reasoned, “the possibility of even a highly improbable result” – an acquittal – “may be pertinent to the extent it would have affected his decisionmaking.”

“In the unusual circumstances of this case,” Roberts determined, Lee has “adequately demonstrated a reasonable probability that he would have rejected the plea had he known that it would lead to mandatory deportation.” When Lee was deciding whether to accept the plea deal, Roberts observed, his most important consideration was whether he would be deported. This should hardly come as a surprise, Roberts added, when the Supreme Court itself has “recognized that preserving the client’s right to remain in the United States may be more important to the client than any potential jail sentence.” If Lee’s attorney had provided accurate advice, Roberts stressed, Lee “would have known that accepting the plea agreement would certainly lead to deportation. Going to trial? Almost certainly.” At least in Lee’s case, Roberts concluded, “that ‘almost’ could make all the difference,” particularly when the plea deal may have only saved Lee a year or two in prison. “Not everyone in Lee’s position would make the choice to reject the plea,” Roberts agreed. “But we cannot say it would be irrational to do so.”

Justice Clarence Thomas, in a dissent joined by Justice Samuel Alito, had harsh words for the court’s ruling today. As an initial matter, Thomas reiterated that, in his view, the Constitution does not protect a defendant’s right to receive accurate information about the effect that a guilty plea will have on his immigration status. But in any event, Thomas argued, Lee cannot show that he was prejudiced by his lawyer’s bad advice because going to trial would not realistically have made any difference: If he “had gone to trial, he not only would have faced the same deportation consequences, he also likely would have received a higher prison sentence.”

Thomas also warned that today’s ruling will have “pernicious consequences for the criminal justice system” by undermining the finality of convictions. He predicted a flood of new challenges to plea agreements, in which defendants will “bear a relatively low burden to show prejudice” from their attorneys’ deficient advice. And that will in turn “impose significant costs on courts and prosecutors,” he suggested, by requiring additional evidentiary hearings. “In circumstances where a defendant has admitted his guilt, the evidence against him is overwhelming, and he has no bona fide defense strategy,” Thomas concluded, “I see no justification for imposing these costs.”