Opinion analysis: To strip citizenship for false statements, government must show that lies would have mattered 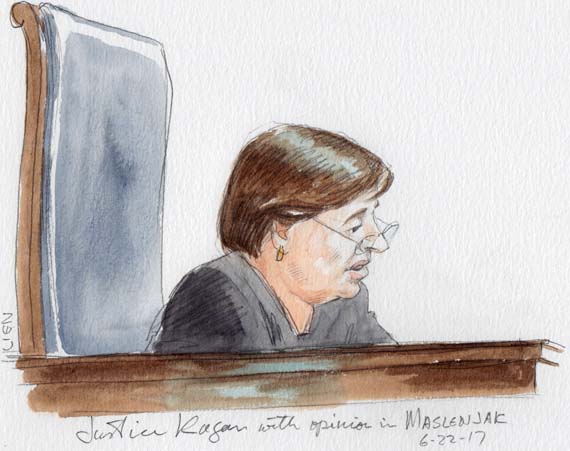 In 2000, Divna Maslenjak and her family came to the United States as refugees from the former Yugoslavia, fleeing the civil war in that country. Maslenjak became a U.S. citizen in 2007, but several years later she was stripped of her citizenship and deported – as was her husband – because immigration officials discovered that she had made false statements during her naturalization process. Maslenjak conceded that she had lied, but she argued that she should be able to keep her citizenship because her lies were not material – that is, that they would not have been important to the officials deciding whether to grant her citizenship application. But the federal government countered, and the lower courts agreed, that Maslenjak could lose her citizenship even if her lies did not play any role in the officials’ decision. Today the Supreme Court largely agreed with Maslenjak, holding that her lies can be held against her only if they would have mattered to immigration officials. But given the gravity of her lies, Maslenjak’s victory may not be enough to secure her return to the United States.

During meetings with U.S immigration officials in Serbia in 1998, Maslenjak indicated that she and her family would be in danger if they returned to the village in Bosnia where they had lived before the civil war. She also told them that her husband had not returned to a Serb-controlled part of Bosnia with the rest of the family because he feared that he would be forced to serve in the Bosnian Serb army. But her husband had in fact served in the army, in a brigade that had participated in an infamous 1995 massacre of 8,000 Bosnian Muslims. When the federal government later learned of her husband’s role during the civil war, it initiated proceedings to deport him.

In an effort to stave off her husband’s deportation, Maslenjak admitted that she had lied about her husband’s whereabouts during the civil war. And because, in the government’s view, Maslenjak knew when she applied for citizenship that she had lied to immigration officials while seeking refugee status, she was charged with violating a federal law that makes it a crime to knowingly procure U.S. citizenship “contrary to any law.” The lower courts rejected Maslenjak’s argument that she could not be convicted unless her lies were material, and Maslenjak was deported to Serbia last year.

In January, the Supreme Court agreed to hear Maslenjak’s plea, and today it sent the case back to the lower courts, where she will get another chance. In an opinion by Justice Elena Kagan, the court reasoned that the “most natural understanding” of the federal law under which Maslenjak was convicted “is that the illegal act must have somehow contributed to the obtaining of citizenship.”

The government’s argument to the contrary, the court observed, “falters on the way language naturally works.” Imagine, the court suggested, a scenario in which “an applicant for citizenship fills out the necessary paperwork in a government office with a knife tucked away in her handbag (but never mentioned or used).” Although the applicant has violated the law barring weapons in federal buildings, and “has surely done so in the course of procuring citizenship,” the court concluded, she has not obtained citizenship “contrary to law,” because the relationship between the violation and the acquisition of citizenship “are in that example merely coincidental: The one has no causal relation to the other.”

The court also observed that the rule proposed by the government would open “the door to a world of disquieting consequences,” in which a lie “would always provide a basis for rescinding citizenship,” even if the lie merely resulted from “embarrassment, fear, or a desire for privacy.” Indeed, the court suggested, the government’s rule would give “prosecutors nearly limitless leverage” – something about which several justices, in a wide variety of contexts, have expressed concern recently.

The court then turned to how its holding should apply in practice. “To decide whether a defendant acquired citizenship by means of a lie, a jury must evaluate how knowledge of the real facts would have affected a reasonable government official properly applying naturalization law.” In many cases, the court emphasized, this will be an easy task. For example, the court noted, “when the defendant misrepresents facts that the law deems incompatible with citizenship” – such as how much time the citizenship applicant has spent in the United States – “her lie must have played a role in her naturalization.”

But even if the facts concealed by an applicant’s lies would not, standing alone, lead immigration officials to deny citizenship, the court continued, “they could have led to the discovery of other facts which would do so.” And in such cases, the court explained, the government must show both that having accurate information would have led immigration officials to investigate further and that their investigation likely would have led to information that would have disqualified the applicant from citizenship. And even then, the court stressed, the applicant can still defend against denaturalization by showing that she was qualified for citizenship.

The jury that convicted Maslenjak, the court concluded, received the wrong instructions. So although the jury might have convicted her if it found either that her lies would have been a reason for immigration officials to deny her citizenship application or that knowing about those lies would have prompted immigration officials to investigate further and discover a reason to reject her application, it wasn’t asked to consider those possibilities. The justices therefore sent the case back to the lower courts for them to take another look.

Chief Justice John Roberts joined Kagan’s opinion for the court in full, as did Justices Anthony Kennedy, Ruth Bader Ginsburg, Stephen Breyer and Sonia Sotomayor. Justice Neil Gorsuch filed a separate opinion concurring in part and concurring in the judgment – his first while on the court – which was joined by Justice Clarence Thomas. Gorsuch agreed with his colleagues that “the plain text and structure of the statute before us require the Government to prove causation as an element of conviction: The defendant’s illegal conduct must, in some manner, cause her naturalization.” But observing that the Supreme Court “often speaks most wisely when it speaks last,” Gorsuch explained that he would not have gone any further than that, and in particular that he would not have provided “guidance” about how the causation requirement should work in practice because the parties had not fully briefed it and the lower courts had not yet weighed in.

Justice Samuel Alito also filed a separate opinion concurring in the judgment. In his view, the federal law under which Maslenjak was convicted does require her lie to have been material, but it “does not require proof that a false statement actually had some effect on the naturalization decision.”