Argument analysis: Pulling wings off flies and other efforts to make sense of the Civil Service Reform Act

Aggressive questioning and a singular perspective from the Supreme Court’s newest member, along with complaints from Justice Samuel Alito about the incomprehensibility of the Civil Service Reform Act, highlighted Monday’s argument in Perry v. Merit Systems Protection Board. Both livened up a complex statutory case that appeared to be a likely win for the petitioner.

At issue is the handling of “mixed cases,” alleging both adverse employment actions against federal civil-service employees and statutorily prohibited discrimination, when the Merit Systems Protection Board concludes that it lacks jurisdiction because the employee was not subject to an appealable action. Perry argues that review should be in the district court, as with all mixed cases; the government argues that review of the single issue should be in the U.S. Court of Appeals for the Federal Circuit, which has exclusive jurisdiction over MSPB appeals.

The highlight of the argument was the aggressive questioning by Justice Neil Gorsuch, hearing his first case on his first argument day on the court. In questions for both sides, Gorsuch seemed skeptical of the notion of a mixed case singularly heard in the district court, suggesting that district courts are granted authority only to hear the discrimination portion of the case, but not to review the determinations of the MSPB, which remain within the exclusive purview of the Federal Circuit. To the extent that necessitates splitting claims, the splitting is supported by the statute, which does not provide for district court review of MSPB decisions. When Christopher Landau, arguing for Perry, insisted that district courts already review substantive and procedural decisions of the MSPB and that this case does not require the court to break any new ground, Gorsuch responded that Landau instead was asking the court “just to continue to make it up.” Gorsuch later pushed Assistant to the Solicitor General Brian Fletcher to follow the language of the statute to a simpler approach, even if it means splitting claims. Justice Elena Kagan intervened, arguing that the court’s decision in Kloeckner v. Solis and cases from all courts dating back to 1983 establish that full merits review in mixed cases rests with the district court. To change course, she insisted, “would be kind of revolution, I mean, in — in — to the extent that you can have a revolution in this kind of case.”

Alito gave full-throated voice to the shared view that the CSRA is poorly drafted and creates a confusing road for prospective federal employees — as he put it, “nobody who is not a lawyer, and no ordinary lawyer could read these statutes and figure out what they are supposed to do.” Alito argued that questions and lack of clarity will remain even after the court has decided this case and he wondered if anything could be done about that. Fletcher declined to fight the point that the statute is complicated, pointing out that agencies do the best they can by providing notices of appeal rights following agency decisions, as Perry received here. Alito could not resist going further, asking, to laughter, whether the statute’s drafter was “somebody who takes pleasure out of pulling the wings off flies.” Chief Justice John Roberts added that the confusion is exacerbated because many federal employees, including Perry, proceed pro se in the early stages. Asking pro se litigants to figure out the complexities of MSPB procedure, Landau agreed in his rebuttal, is a “fool’s errand,” made worse under the government’s reading of the statute. 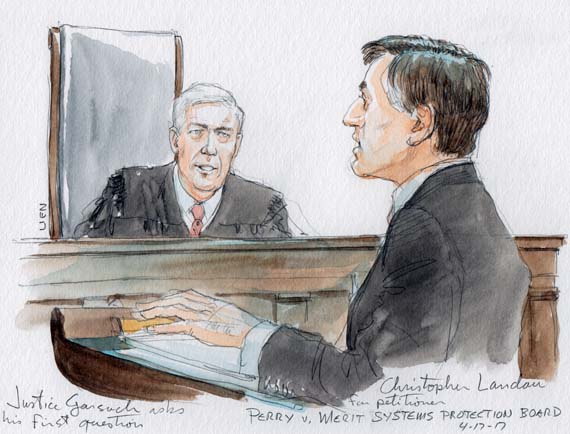 Landau returned several times to the theme he had presented in his briefs, linking this case to the court’s recent decisions rejecting “profligate” use of the concept of jurisdiction. In concluding that Perry had voluntarily accepted suspension and retirement, the MSPB had decided the merits of the CSRA piece of the mixed case, with the next step being review in the district court. Anything else would require splitting issues in a single case, contrary to congressional intent (and Gorsuch’s preferred reading). This argument allowed Landau to parry Alito’s question about why the government’s reading — that a mixed case requires allegations of discrimination but an actual appealable adverse action — is not correct. The jurisdiction of any adjudicatory body, Landau responded, is always triggered by allegations, and the ultimate rejection of those allegations cannot retroactively strip the court of jurisdiction.

Fletcher began with the core argument from his brief, as well — this is not a mixed case because, as the MSPB decided, Perry did not suffer an adverse employment action appealable to the Board. Fletcher’s sharpest interlocutors, from the beginning of his argument, were Roberts and Kagan, who took turns challenging him on multiple points: Who has power to finally decide whether an action is a mixed case? Why should allegations of MSPB jurisdiction not be sufficient, when they are in so many other contexts? Isn’t splitting issues between district courts and the Federal Circuit contrary to the statutory scheme? Roberts also pointed out that the government made similar arguments to justify claim-splitting in Kloeckner for cases in which the MSPB rejected a claim on procedural grounds, arguments the court unanimously rejected; it did not make sense for the government to come back with the same arguments by insisting that jurisdiction is different from procedure. In terms of simplicity and accessibility, Roberts said, it seems “wiser” to avoid the type of splitting the government’s position requires.

Landau managed to close his rebuttal on a catchy note that also captured the confusion and complexity troubling the justices. Landau reminded the court that Kloeckner had announced that “the government’s position in this case is just too complicated to be right.” That, he insisted, remains as true here.