Justice Neil Gorsuch takes the bench, jumps into the fray 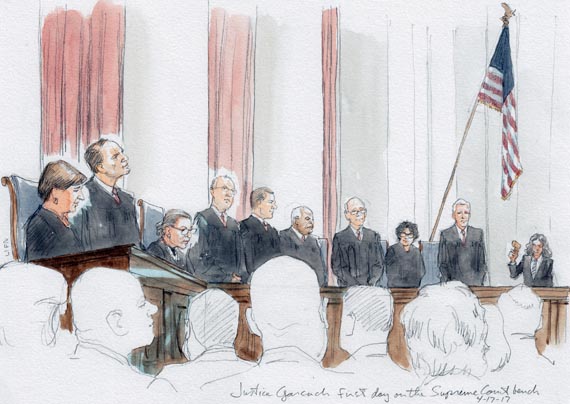 During his March confirmation hearing, then-Judge Neil Gorsuch repeatedly professed his belief that judges should adhere to the plain language of a law, without considering other factors such as the law’s history or what Congress might have intended when it enacted the law. After his first oral argument as a Supreme Court justice, it became clear that, when it comes to taking a statute literally, Gorsuch meant exactly what he said.

The justices opened their April session with a case presenting a technical but important question about appeals from decisions by the Merit Systems Protection Board, which reviews federal employees’ claims that they were wrongly fired, suspended or demoted. When the MSPB rules that it lacks the authority to rule on an employee’s claim because the employee cannot appeal the allegedly wrongful action, but the employee also alleges that she has been the victim of discrimination – a so-called “mixed case” – does the case then go to a federal district court, or to the U.S. Court of Appeals for the Federal Circuit?

The justices turned to that question a few minutes after taking the bench at approximately 10 a.m. this morning. The justices are arranged on the bench according to seniority, with Chief Justice John Roberts at the center, flanked by Justices Anthony Kennedy (the most senior associate justice) and Clarence Thomas (the second-most senior associate justice). As the junior justice, Gorsuch now sits to the chief justice’s far left, and to the far right from the vantage point of the advocates. Roberts said a few words to welcome his newest colleague to the court, telling Gorsuch that “we wish him a long and happy career in our common calling.” Gorsuch responded by thanking Roberts and the other justices for the “warm welcome” that he had received.

Chris Landau was the first attorney to argue before Justice Gorsuch, urging the court to rule that mixed cases like his client’s should go to the district court. Landau fielded questions from several different justices – including Kennedy, Roberts, and Justices Ruth Bader Ginsburg and Samuel Alito – before, at approximately 10:13 a.m., he found himself on the receiving end of Gorsuch’s first question as a justice. Exactly what part, Gorsuch wanted to know, of the federal statute at issue provided for the path that Landau was advocating? Landau started to respond by pointing to a Supreme Court case, but he didn’t get far before Gorsuch interrupted him to focus again on what he described as “the plain language” of the statute.

A few minutes later, Landau sought to reassure the justices that his client was not asking the Supreme Court to “break new ground” with its ruling. But Gorsuch again seemed skeptical, suggesting that what Landau was in fact asking the justices to do was to “just continue to make it up.” Gorsuch seemed to agree with Landau that the result his client is seeking should be in the text of the governing statute – but, Gorsuch cautioned, it isn’t.

Gorsuch had fewer questions for Brian Fletcher, the assistant to the U.S. solicitor general who argued on behalf of the federal government. But here too he focused on the text, asking Fletcher (somewhat rhetorically) whether it wouldn’t “be a lot easier” if we just followed the plain language of the statute. And when Fletcher started to outline the reasons underlying the government’s position, Gorsuch pressed Fletcher to explain “where” in the statute the government’s proposed rule found support.

Not all of the justices seemed impressed with the plain language of the statute, though. It may have been Gorsuch’s first argument, but Alito stole the show with his complaints to Fletcher about how “unbelievably complicated” the governing statute is. Lamenting that no one who isn’t a lawyer could possibly understand it, Alito asked Fletcher whether he knew “who wrote this statute? Someone who takes pleasure in taking the wings off flies?”

After roughly an hour of oral argument, Roberts thanked Landau, who had just finished his rebuttal, and indicated that “the case is submitted.” And with that, Justice Neil Gorsuch’s first case was over.