The Supreme Court seemed ready to hand a victory to railroad company BNSF in a lawsuit brought by two of the company’s injured workers. A solid majority of the justices appeared unconvinced that the Federal Employers’ Liability Act, a federal law that allows railroad workers to sue their employers for injuries that occur on the job, allows the workers to sue the company – which is incorporated in Delaware and has its principal place of business in Texas – in Montana, even though neither worker lived in Montana or was injured there.

Arguing for BNSF, attorney Andrew Tulumello told the justices that the Montana state court’s decision allowing the case against the railroad to go forward was flatly wrong. Under the Supreme Court’s 2014 decision in Daimler AG v. Bauman, he contended, the Montana courts could not have jurisdiction over the injured workers’ lawsuits because the railroad was not “at home” in Montana. 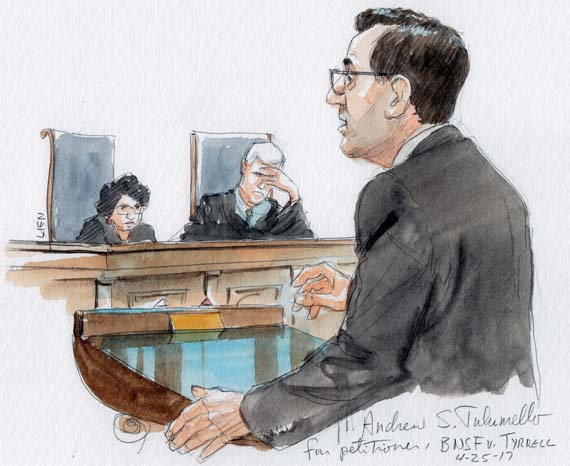 Justices Sonia Sotomayor and Ruth Bader Ginsburg challenged that assertion. Sotomayor asked Tulumello whether BNSF had registered its business in Montana. When Tulumello responded that it had, Sotomayor suggested that registration in Montana might “change things.” If she established residency in several different states, she observed, she could be sued in those states. Alluding to the court’s campaign-finance jurisprudence, she asked pointedly, “If you are going to treat a corporation like a person, which we seem to be doing,” why wouldn’t a corporation be subject to suit in the states where it is registered? Ginsburg echoed that idea, telling Tulumello that by registering in Montana, the company had effectively consented to jurisdiction in the state.

Tulumello pushed back, countering that the text of the Montana law that requires BNSF to register specifically provides that personal jurisdiction over companies cannot be based solely on registration in the state. And any traction that the two justices might have temporarily gained from their line of questions seemed to vanish when Chief Justice John Roberts asked Tulumello whether that issue was actually even before the Supreme Court. No, Tulumello responded.

Justice Samuel Alito also posed a fairly friendly question, asking Tulumello to address assertions by the workers’ supporters that a ruling for the railroad would “create chaos” in the court system. Tulumello assured Alito that the result would actually be the opposite, likening the current system to the “wild west.”

After a relatively easy time at the lectern, Tulumello sat down early, using only 11 of his 20 minutes. He was followed by Nicole Saharsky, the assistant to the U.S. solicitor general representing the federal government, which filed a brief supporting BNSF. The justices allowed Saharsky to speak at some length, and she too sat down early.

Julie Murray represented plaintiffs Robert Nelson, who contends that he suffered a serious knee injury while working as a fuel-truck driver, and Kelli Tyrrell, who alleges that her husband Brent died of cancer that he contracted as a result of his exposure to chemicals while working for BNSF. Murray emphasized the long history of injured railroad workers being able to sue under FELA. When it enacted FELA, she stressed, Congress expressly intended that workers would be able to bring these kinds of lawsuits, even when neither the workers nor the injuries had any connection to the state where they were filed. This is so, she explained, because Congress recognized that railroads operate differently from many other industries – for example, she noted, it is commonplace that railroad workers will never work in their home states. 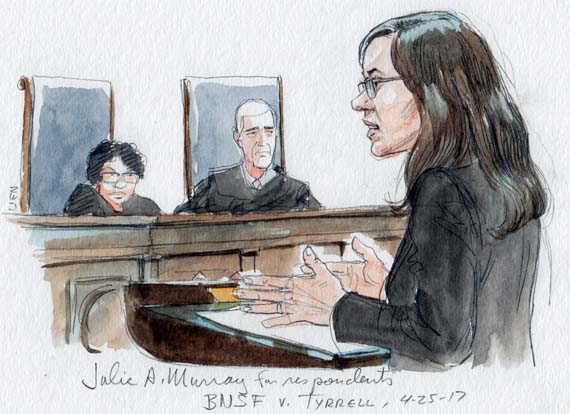 Roberts was skeptical, reminding Murray that BNSF operates in over two dozen states. Does this mean, he asked Murray, that the railroad can be sued in one of those states even if the injury occurs elsewhere? Yes, Murray responded, that is what Congress intended.

Roberts wondered aloud whether the decision to sue BNSF in Montana might be related to the perception that Montana would be a more desirable forum in which to sue a large corporation. Murray explained that, because of the large volume of FELA cases filed in Montana, the state’s judges know the issues “like the back of their hand” – an answer that Roberts characterized as “a little circular.”

In more troubling news for Tyrrell and Nelson, some of the court’s more liberal justices also appeared dubious. Ginsburg noted that the language in the FELA provision on which the plaintiffs rely is found in “200-odd” other laws dealing with venue – that is, the place where lawsuits may be filed. It sounds like a venue provision, Ginsburg declared.

Murray added that even if the justices were to decide that FELA does not confer jurisdiction over BNSF, the Montana courts would still have jurisdiction over BNSF because of the company’s contacts with Montana. The railroad has a “gigantic footprint” in the state, she emphasized, and BNSF and its predecessor have been in Montana since before it even joined the Union.

This discussion led to one of the lighter moments of the morning. Agreeing that a railroad would have a “large physical plant” in a state, Roberts asked Murray whether other industries, like the trucking industry, could also be “at home” under this theory. How, he inquired, do we make that decision?

Murray told Roberts that her clients’ argument was limited to railroads, which she characterized as “unique” because of their reliance on fixed tracks. Trucking companies, she seemed to suggest, would be different because trucks could use roads to travel all over the state.

Roberts was unconvinced. No, he retorted, trucks would all generally use the same interstate highways to traverse the state. “They’ll take I-95,” he said, before hesitating. “What is it, I-90?”

The court’s newest justice, who hails from Colorado, chimed in. “It’s I-80, across Montana.”

A few minutes passed, during which some of the justices apparently requested – and then passed around – atlases from the justices’ library. After some animated conversations with his neighbors on the bench, Sotomayor and Justice Stephen Breyer, Gorsuch interrupted Murray to apologize for an error. “It’s I-90 across Montana, and I-80 across Wyoming.”

Breyer then had a question that did not seem to portend well for Tyrrell and Nelson either. He asserted that, in the court’s earlier decision in Daimler, the company had an extensive operation in California, where the plaintiffs sought unsuccessfully to sue it. You’re “making a valiant effort,” he told Murray, “but I don’t really see a difference.”

Tulumello used only a few minutes of his remaining time when he returned to the lectern for his rebuttal. Due process, he contended, does not depend on what line of business you are in. Based on today’s argument, a clear majority of the court seems to agree with him.