[This post was updated at 12:56 p.m. to include a discussion of the cases in which the court called for the views of the acting solicitor general.]

Today the justices issued additional orders from their September 26 conference – the first conference since their summer recess began at the end of June. In last Thursday’s order list, the court added eight new cases to its merits docket for the term. The focus of today’s orders was to deny review in thousands of cases, including some high-profile ones.

Among today’s denials was the federal government’s petition for rehearing in United States v. Texas, the challenge to an Obama administration policy that would have permitted as many as four million undocumented immigrants to apply for a program that would have allowed them to remain in the country and work here legally. The justices heard arguments in the case in April of this year, but in June they announced that they had deadlocked 4-4, an outcome that left in place the lower court’s decision striking down the policy. In July, the Obama administration asked the court to reconsider that ruling when it has all nine justices. The petition for rehearing was, as the federal government acknowledged in its filing, a long shot, and today the justices rejected it without comment. 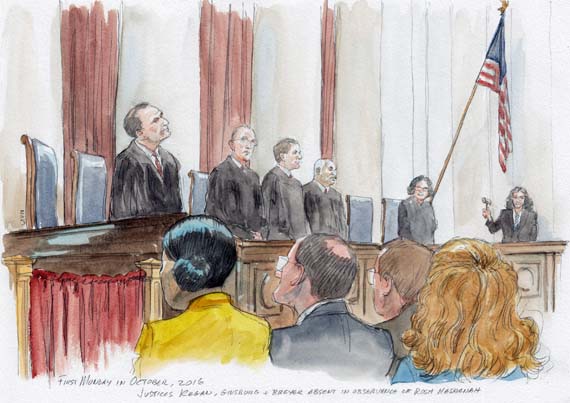 The justices began the new term this morning with a non-argument session at which only five of the eight justices were present. Justices Ruth Bader Ginsburg, Stephen Breyer, and Elena Kagan were absent, presumably in observance of the Jewish holiday of Rosh Hashanah. (Art Lien)

Another high-profile denial came in the trademark case of the Washington Redskins, who had asked the justices to review a decision by a federal trial court upholding the U.S. Patent and Trademark Office’s cancellation of the team’s trademarks. The team’s request was unusual, because it asked the court to weigh in before the U.S. Court of Appeals for the 4th Circuit had the opportunity to do so – a maneuver known as “certiorari before judgment.” However, today’s order does not put an end to the team’s case. Last Thursday, the court granted review in a similar case; the justices’ decision in that case will affect the outcome of the Redskins’ case, which will now return to the 4th Circuit.

The court also denied review in a pair of cases (NCAA v. O’Bannon and O’Bannon v. NCAA) arising out of a class action antitrust challenge to National Collegiate Athletic Association rules requiring college athletes to be amateurs. The lead plaintiff is Ed O’Bannon, a former professional basketball player who played on the UCLA team that won the national championship in 1995. The U.S. Court of Appeals for the 9th Circuit agreed with the players that the ban on pay for athletes violated federal antitrust laws, and the NCAA asked the justices to weigh in, arguing that the 9th Circuit’s decision “threatens far-reaching deleterious consequences.” For his part, O’Bannon had challenged a portion of the 9th Circuit’s ruling that struck down the part of the trial court’s holding that would have allowed schools to give student-athletes, in addition to full scholarships, as much as $5000 per year in deferred compensation.

In several cases in which the court is considering whether to grant review, the justices also invited the federal government to file briefs expressing the views of the United States – a procedure known as “CVSG” (call for the views of the solicitor general). CVSGs are common when the federal government may have an interest in the issue presented in a case – for example, because the case involves the interpretation of a federal statute – but is not a party, and the justices normally give significant weight to the federal government’s recommendations. There were seven CVSGs, two of which arise from the same lower-court ruling:

Ali v. Warfaa and Warfaa v. Ali deal with the issue of immunity for foreign officials sued in U.S. courts. The plaintiff, Farhan Warfaa, is a native of Somalia who alleges that he was abducted and tortured by Somali National Army soldiers, on the orders of Yusef Abdi Ali, an army official now living in the United States; Ali, Warfaa alleges, also attempted to kill him. The question before the court is whether, even though a foreign official like Ali would normally be immune from lawsuits, that immunity can be overcome by allegations that his conduct violated “jus cogens” norms of international law – that is, fundamental and accepted principles of international law from which no deviation is allowed. In his brief asking the court to review his case, Ali cautioned that, if the lower court’s ruling against him is allowed to stand, that court could become “a magnet for suits against foreign officials, who may be served whenever they pass through Maryland or northern Virginia to reach” the District of Columbia.

U.S. Bank v. Village at Lakeridge is another bankruptcy case. A reorganization in a bankruptcy under Chapter 11 of the Bankruptcy Code can be confirmed over the objections of a secured creditor only if a class of impaired creditors votes in favor of the plan. The votes of “insiders” do not count, however; the questions before the court involve exactly what constitutes an “insider” and how courts should make that determination and review it on appeal.

BeavEx Inc. v. Costello involves a question that often makes its way to the justices: whether, and to what extent, federal laws “preempt” – that is, trump – state laws. The Federal Aviation Administration Authorization Act preempts state laws “related to a price, route, or service of any motor carrier” “with respect to the transportation of property.” The question on which the justices have asked the federal government to express its view is whether that federal law trumps state laws that require delivery services to treat their drivers as employees (who are therefore entitled to benefits), rather than independent contractors. BeavEx argues that if the FAAAA does not preempt state laws, it (and other delivery services) will face conflicting obligations around the country.

Cyan, Inc. v. Beaver County Employees Retirement Fund stems from a lawsuit brought as a class action on behalf of shareholders who purchased stock in Cyan after its initial public offering; the stocks then had “weaker-than-expected” results. The lawsuit was filed in a state court under the Securities Act of 1933, which creates causes of action for false statements made in connection with the public offering of stocks. The question presented by the case, and on which the federal government will now weigh in, is whether a 1998 federal law, the Securities Litigation Uniform Standards Act, bars state court jurisdiction over lawsuits that, like this one, only allege violations of the Securities Act of 1933. Cyan argued in its petition for review that the significance of that question “cannot be overstated,” as it affects the “integrity of national securities markets.”

United States ex rel. ABLE v. U.S. Bank arises out of the False Claims Act, a federal law that allows private individuals to bring lawsuits if they discover that a claim made to the government for payment is “false or fraudulent.” The FCA’s “public disclosure” bar prohibits such lawsuits – known as qui tam actions – if they contain allegations that have already been made public. The question presented by this case is exactly how similar those public disclosures must be to trigger the public disclosure bar.

There is no deadline for the acting solicitor general to file the briefs that were requested today.