A “view” from the courtroom: Dress for success

It’s Halloween, and the eight people dressed up as Supreme Court justices are about to spend an hour contemplating important questions of intellectual property, such as, “Does this cheerleader costume make me look fat?”

One of the first things we learn during Monday’s arguments in Star Athletica LLC v. Varsity Brands Inc., about when a design feature of a useful article may be copyrighted, is that the stripes, chevrons, and zigzags that are a familiar feature of the modern cheerleader uniform are meant to be “slimming.”

“When you’re talking about these cheerleader uniform designs, the arrangement of the color blocks and the chevrons and the stripes, if you made it smaller and put it in the center of a uniform, it would no longer have the slimming effects,” says John J. Bursch, representing Star Athletica. “It wouldn’t make the wearer look taller.”

Bursch is soon referring to a “friend of the court” brief by two law professors, “the Fromer and Buccafusco brief, where it is the Stella McCartney dresses on Kate Winslet,” he says. “And she’s got those slimming, dark lines along the sides that change how she is perceived. It makes her shape look different to someone who is looking at her, and the lines on these uniforms do the exact same thing. Similarly, … in these uniforms you’ve got the waist-narrowing ‘V’s on the sides. It creates the optical illusion that the wearer is thinner than they actually are, slimmer.”

We’re only a few minutes in, and this seems more like an episode of “Project Runway” than a Supreme Court argument. (In today’s first case for argument,  Fry v. Napoleon Community Schools, about service dogs and special education, some families were expected to bring such animals into the courtroom, but none ended up doing so. Outside the building, however, the Frys’ “retired” service dog, Wonder, greeted the family after the argument.) 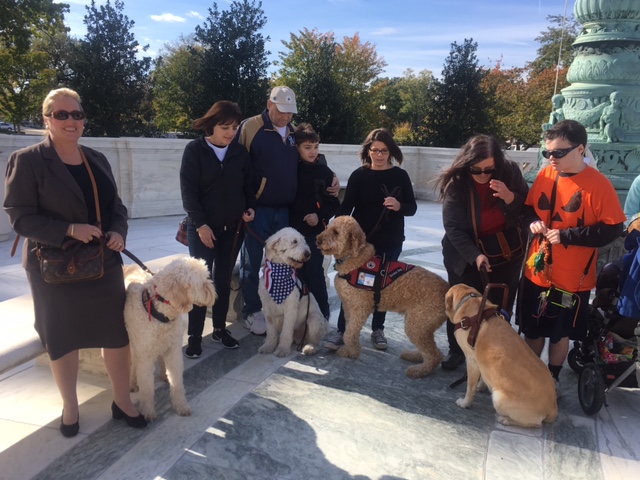 Wonder and his service dog cohort (Photo by Amy Howe)

In the cheerleader case, there is much more at stake than some chevrons and zigzags on a uniform. Star Athletica is an upstart in the huge market for cheerleading uniforms. It contends that industry leader Varsity Brands – which Fortune magazine once called “a vast empire of pep” – copyrights hundreds of designs and photos of cheerleader uniforms, then sues competitors for similar designs that Varsity claims infringe its copyrights. The lower court ruling in its case created uncertainty for the entire $330 billion per year U.S. apparel industry, Star Athletica told the Court at the petition stage.

“I don’t know that that’s bad,” adds Sotomayor, who as a private attorney much earlier in her career represented major fashion brands in fighting knockoffs. “I’m just saying.”

The justices toss out all manner of examples as they weigh whether the design elements of a cheerleader uniform may be copyrighted.

Justice Elena Kagan asks about the “tuxedo shirt” on Page 10 of the solicitor general’s brief. It is not apparent, until one consults the brief, that this is not an actual men’s tuxedo dress shirt but that T-shirt designed like the front of a tuxedo that some smart aleck wore to every high school prom. (Thus, the U.S. Copyright Office has issued a copyright for “Tuxedo T-Shirt,” No. VA0001930383 (2014).)

“What’s the difference between Mondrian or Picasso and these [cheerleading uniform] lines?” Kennedy says.

Justice Stephen Breyer has another artist’s work in mind.

“So when Marcel Duchamp has a shovel on the wall and says it’s a work of art, he can have a copyright as long as he doesn’t try to sue people who make shovels?” he says.

There is also discussion of camouflage and fabric designs, which have won copyright protection. And today is a day for visualization, as the lawyers make repeated references to specific pages of briefs that show designs of cheerleader uniforms or other garments.

“If you look at page 22 and 23 of their brief, they have our little black dress, and then they have this very design here, number 815, and they explain that if we are right that this design has functionality,” Bursch says.

Chief Justice John Roberts presses Jay about whether a design applied to a useful article may be copyrighted.

“You can have a copyright in the pattern, and, yes, you can attach it to a useful article like a lunchbox that’s going to have a design,” the Chief Justice says. “The design on a lunchbox doesn’t make the lunchbox a lunchbox. It’s still a lunchbox.”

We’re thinking back to our Piet Mondrian/Marcel Duchamp lunchbox in fourth grade.

Eric Feigin, an assistant to the solicitor general arguing on the side of Varsity Brands, tells the court toward the end of the argument that “the dispute in this case is really boiling down to is a question of what the utilitarian aspects of the ‘useful article’ are.”

“One is conveying the information that someone is a cheerleader—identifying someone as a cheerleader; and the other is affecting the viewer’s perception of the wearer’s appearance,” Feigin adds.

Justice Breyer interrupts him with a more philosophical observation about the meaning of clothes.