How the Justices react to a case during oral argument is often a poor predictor of how they will ultimately rule. And then there are rulings like Monday’s unanimous decision in Ross v. Blake, in which the bottom line reads very much like a précis of the argument session. Indeed, it could hardly have come as a surprise to anyone in the courtroom on March 29 that the Justices both (1) rejected the existence of a sweeping “special circumstances” exception to the Prison Litigation Reform Act (PLRA)’s exhaustion requirement; and (2) made it abundantly clear that, even without such an exception, respondent Shaidon Blake’s failure to exhaust administrative remedies before bringing an excessive force suit against two Maryland corrections officers may not have been fatal. 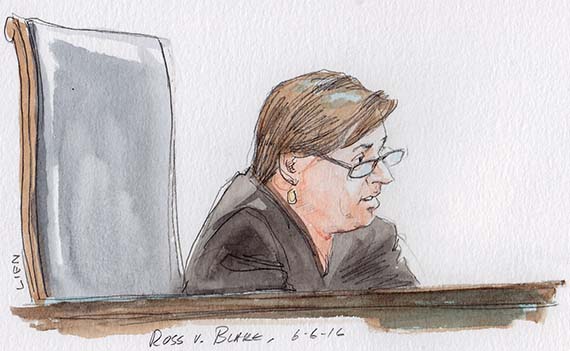 As we noted in our argument preview, the Justices faced the awkward specter of a case in which the dispute did not actually appear to be about the question presented. Indeed, rather than defend the Fourth Circuit’s recognition of an atextual “special circumstances” exception to the PLRA’s exhaustion requirement, Blake argued not that his failure to exhaust should be excused, but that the exhaustion requirement did not apply because the unexhausted remedies cited by the state of Maryland (representing petitioner Michael Ross, a state corrections officer) were not in fact “available.” The oral argument itself revealed a number of Justices both sympathetic to that claim and skeptical of Maryland’s response, even as they appeared to agree with Maryland and the United States (appearing as an amicus in support of the state) that the PLRA does not brook the “special circumstances” exception on which the court of appeals relied.

So it was that Justice Elena Kagan, writing for a (basically) unanimous Court, made quick work of the decision below, devoting just over four pages of analysis to the conclusion that “[s]tatutory text and history alike foreclose the Fourth Circuit’s adoption of a ‘special circumstances’ exception” to the PLRA’s exhaustion requirement. But, as Kagan continued, “the exhaustion requirement hinges on the ‘availab[ility]’ of administrative remedies: An inmate, that is, must exhaust available remedies, but need not exhaust unavailable ones.” Turning to a series of lodgings filed by both the state and Blake once the case had reached the Supreme Court, Kagan explained that “both sides’ submissions, although scattershot and in need of further review, lend some support to Blake’s account – while also revealing Maryland’s grievance process to have, at least at first blush, some bewildering features.”

Thus, although the Court stopped short of holding that the relevant administrative remedies were not in fact available to Blake, it did far more than simply send the case back to the Fourth Circuit to explore the matter de novo. Instead, the opinion of the Court closed by providing specific questions for the court below to consider:

First, did Maryland’s standard grievance procedures potentially offer relief to Blake or, alternatively, did the [internal] investigation into his assault foreclose that possibility? Second, even if the former, were those procedures knowable by an ordinary prisoner in Blake’s situation, or was the system so confusing that no such inmate could make use of it? And finally, is there persuasive evidence that Maryland officials thwarted the effective invocation of the administrative process through threats, game-playing, or misrepresentations, either on a system-wide basis or in the individual case? If the court accepts Blake’s probable arguments on one or more of these scores, then it should find (consistent this time with the PLRA) that his suit may proceed even though he did not [exhaust a particular state administrative remedy].

The unusually strident mandate provoked only a modest objection from Justice Clarence Thomas, who expressed concern about Kagan’s reliance upon extra-record evidence even while otherwise joining the opinion (and the remand) in full. The only other Justice to write separately was Justice Stephen Breyer, who concurred only in part – and only to remind readers of his somewhat broader view of the PLRA’s exhaustion requirement as encompassing at least some atextual exceptions grounded in administrative law. If anything, both concurrences may simply provide further evidence of the “bored snappishness” that Dahlia Lithwick suggested last week has increasingly come to characterize this Term. But at bottom, all eight Justices otherwise seemed to agree both that the Fourth Circuit was wrong to recognize a “special circumstances” exception to the PLRA, and that that wasn’t actually the matter at issue in this case.

Plain English: When a state or federal prisoner tries to sue bring a lawsuit against prison officials, he must first raise his claim through whatever internal channels the state has provided, and his failure to do so cannot be excused by amorphous “special circumstances.” That said, if the prisoner can’t really raise his claim through the state’s internal channels, then he can bring a lawsuit even if he did not try to go through those channels first.