Judging from this morning’s oral argument in Lockhart v. United States, which involves the correctness of a ten-year mandatory-minimum sentence for a federal child pornography possession conviction, the result was not close to being decided as the Justices went into their Conference. Not only is it unclear who will win, it is unclear what rationale would be used to support a victory for either side.

As I noted in my argument preview, Avondale Lockhart and the federal government have each deployed a canon of statutory construction in their favor. The issue before the Court is whether the penalties section of the federal possession-of-child-pornography statute exclusively mandates a minimum sentence of ten years for prior state convictions involving a minor or ward, or whether the mandatory-minimum provision also covers state convictions like Lockhart’s, which involved a sexual attack against an adult.

Justice Antonin Scalia made it clear that he thinks this “battle of the canons” results in a draw, and therefore that the rule of lenity should tip the case toward Lockhart. “[W]e’ve been discussing this dueling canons and so forth,” he said to Assistant to the Solicitor General Ann O’Connell, who argued on behalf of the federal government. “My goodness, I have no – I have no assurance what the right answer is. But I know that somebody could read this and think that it means what [Lockhart] says it means. And if that’s the case, it seems to me the rule of lenity comes into play.” 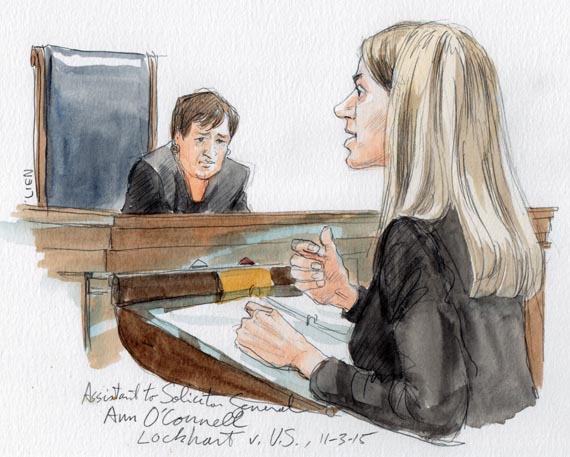 Justice Anthony Kennedy later asked O’Connell to address the rule of lenity. “Does the rule of lenity apply with the same force when the question is the substantive definition of a crime as distinct from the penalty that’s attached?” he inquired. “I think the Court has typically applied the same-strength rule of lenity to both substantive provisions and penalty provisions,” she replied, to which Kennedy said, “That makes a great deal of sense.”

Justice Elena Kagan also seemed to suggest that she was leaning toward voting for Lockhart, but for a very different reason. She was not persuaded that the battle of the canons results in a draw. “You know, it’s confusing language,” she said to O’Connell. “And I showed it to all my clerks . . . . And two came out on one side, and two came out on the other side.” Yet, said Kagan, she felt that one canon definitely took precedence over the other. “[Y]ou have this last-antecedent rule, and it’s an important rule. But it gives way when . . . there is a certain quality to all the antecedents when they’re all parallel and when the last modifier equally sensibly refers to them all, right? And that that’s a situation, so that series-qualifier rule is in some sense a rule about when the last-antecedent rule doesn’t apply.” Responded O’Connell: “[W]e think the clearest indication here that it doesn’t make sense for the qualifier to apply to all three of the categories is that it literally renders categories B and C the same.”

If Scalia, Kennedy, and Kagan seemed to be leaning toward Lockhart, Justice Samuel Alito clearly thought the government should win. Yet he had trouble getting O’Connell to back him on what he believed to be the most persuasive point in the government’s favor. Early in the proceedings, Alito had pressed Edward Zas, the Assistant Federal Defender arguing for Lockhart, on the fact that Sections 2241, 2242, and 2243 all use almost the same terminology. Referring to the contested list of phrases in Section 2252(b)(2), Alito said, “It’s a strange list . . . . Sexual abuse would include aggravated sexual abuse. So . . . the reference to aggravated sexual abuse seems to be redundant.”

“But there’s an explanation that jumps out, and that is that . . . almost this precise terminology appears in Sections 2241, 2242, and 2243. And in those provisions, all those terms are defined so that they mean something different. So it seems to jump out at the reader that that’s what Congress was doing in this list,” Alito said. “What is wrong with that?” he asked Zas. Zas responded that Congress did not use the precise same language in Section 2252(b)(2), and that it could not be an accident. “Congress . . . knew . . . how to do what Your Honor is suggesting, that is, to be tracking the Federal predicates exactly. Because in a different provision, the provision that became 2241(c), it did exactly that,” Zas said. “So they didn’t do that here.” 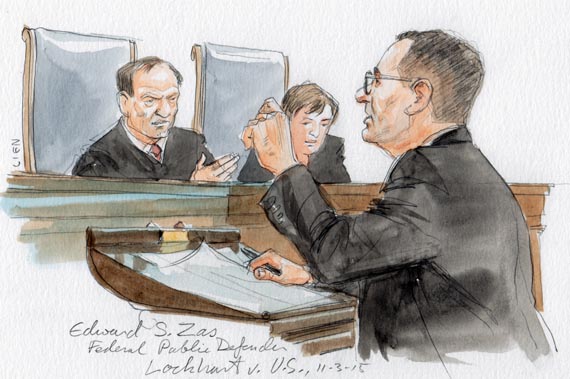 “I’m sorry, I don’t follow that,” chimed in Chief Justice John Roberts. “As I see it, they did, as Justice Alito said, track pretty much exactly 2241, 42, and 43 in developing the list that’s . . . before us today.” Thus, both Alito and Roberts seem to be persuaded that the government should win based on what might be labeled a “tracking” theory – that Congress meant in Section 2252(b)(2) to “track” similar language elsewhere that everyone agrees covers convictions involving both adults and minors. Yet Alito could not get the government’s own lawyer to sign on to the tracking theory.

“Why do you resist the argument that what Congress was doing was picking up basically the definitions of the federal offenses that are worded almost identically?” Alito asked O’Connell. But she refused his help. “Justice Alito, we don’t think that Congress was trying to pick up the exact definitions of the three Federal statutes. And we think that’s most clear, as [Lockhart] pointed out, by the fact that there are other provisions in this chapter where Congress used different language when it wanted to do so.” (Sections 2241-43 use the term “abusive sexual contact,” whereas Section 2252(b)(2) uses “abusive sexual conduct.”)

“Yes, they could have done it more clearly, of course. The . . . statute is poorly drafted,” said Alito. “You know we give them a ‘D’ for their drafting of this statute.”

Justice Stephen Breyer also wanted to focus on the drafting process, but toward a very different end. “If we are absolutely at equipoise” in construing the text of the statute, “before turning to the rule of lenity, I would like your comment on my temptation to say at least here, the legislative history helps,” Breyer said to O’Connell.

“I knew you were going to say that!” interjected Scalia, to laughter. “I knew it.”

Breyer was clearly calling on his experience as Senator Ted Kennedy’s right-hand man before he joined the judiciary. “The way these are actually written is that a general idea is given to a person whose job it is to draft. And that drafter tries to put in words the general intention that’s been described, and the report is used to describe what the general intention was. I’m not saying a hundred percent, but very often with technical statutes, that’s how it works.” This drew a sharp retort from Scalia, who asked O’Connell, “You don’t think Congress can leave it to its staff to decide what a statute means, do you? Isn’t legislative power nondelegable?” To which Breyer responded, “I don’t know what the 4,000 people over there are doing, if they’re not entrusted by their principals to write words on paper that would reflect the general idea. You think they can’t do that?”

Among the remaining Justices, neither Ruth Bader Ginsburg nor Clarence Thomas said anything obviously tipping their hands. Justice Sonia Sotomayor remained silent through most of the argument, but piped up during Zas’s rebuttal. She seemed to be leaning toward the rationale on which the Second Circuit panel relied to affirm Lockhart’s sentence.

“My problem is, why would [Congress] include adults as a predicate for the minimum in Federal crimes but not in straight State crimes?” she asked Zas. Before he could issue the response contained in his briefs, she cut him off. “I know that they have done it in other situations. But why here? If they’re worried about the abuse of children, why would they not capture every conceivable person or every conceivable abusive act toward kids?” “Congress reasonably could have determined that people who commit abuse offenses against adults, as bad as that is, don’t pose the same level of danger to children,” responded Zas. Whether that response wins the day may depend upon whether the Justices can figure out why that line of reasoning sometimes justifies asymmetry between federal and state priors and sometimes does not.

In the end, Lockhart’s fate may be determined by Scalia’s ability to create enough doubts about the clarity of the text in the minds of Thomas and Ginsburg. If their doubts rise to a sufficiently great level, they could be persuaded to decide the case on the basis of the rule of lenity. Kennedy may already be there, and, although Kagan does not seem to think this is an appropriate case for lenity, she may be persuaded on the “series qualifier” canon.