SCOTUS Map: May and June 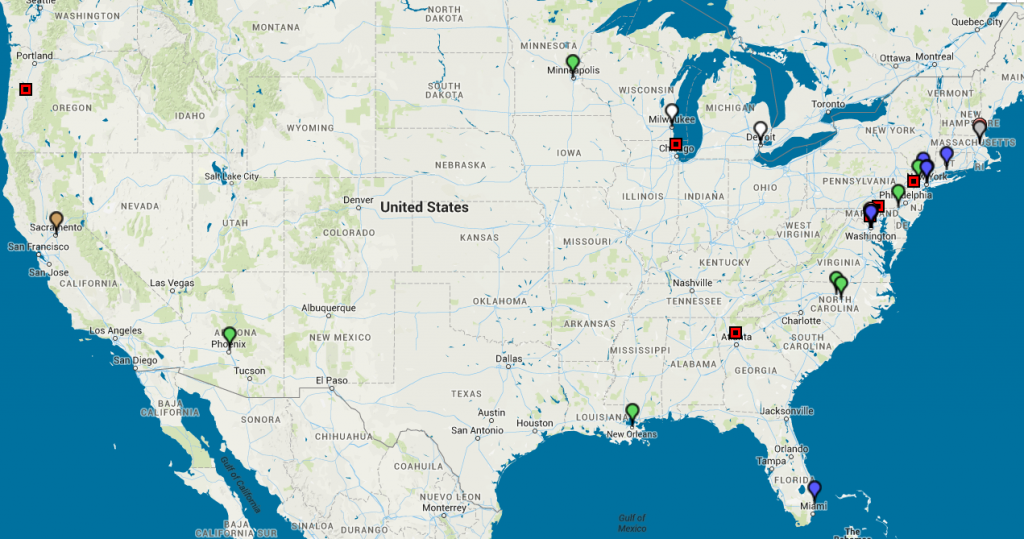 May and June always bring a flurry of activity at the Supreme Court, as the Justices wrap up the Term and issue a slew of important (and sometimes controversial) decisions. In between opinion-writing, however, the Justices still find the time to speak at graduations, conferences, and alumni events. We’ll start with a list of appearances by the Justices since the last installment of this feature:

On May 9, Justice Anthony Kennedy sat down with Stanford Law School’s M. Elizabeth Magill for a conversation at a Stanford Connects alumni event in Sacramento.

On May 11, Justices Ruth Bader Ginsburg and Stephen Breyer served as judges at the Shakespeare Theatre Company Bard Association’s 2015 Annual Mock Trial, where they heard arguments on whether the fictitious Family Court of La Mancha had properly deemed Don Quixote mentally incompetent and therefore in need of a guardian. SCOTUSblog’s Tom Goldstein argued on behalf of Don Quixote, and Kali Borkoski reported on the event for this website.

On the same day, Justice Antonin Scalia was in Minneapolis to promote his most recent book – Reading Law: The Interpretation of Legal Texts – which he co-authored with Bryan A. Garner.

Justice Scalia then traveled to Arizona, where he was the featured speaker at a Phoenix Federalist Society Lawyers Chapter luncheon. “The most important element of a good dissent is a really stupid majority decision,” the Arizona Daily Sun quoted him as saying.

On May 14, Justice Elena Kagan, the Circuit Justice for the U.S. Court of Appeals for the Sixth Circuit, spoke at the circuit’s annual Judicial Conference (held in Detroit). The Sixth Circuit Appellate Blog reports that Kagan discussed, among other things, her relationships with her colleagues on the Court and the Court’s overall role in the political system.

Retired Justice John Paul Stevens gave remarks on the intersection of baseball and antitrust law at the Sports Lawyers Association Annual Conference in Baltimore on May 15. There is “no valid reason for giving the leagues any exemption, not only for concessions or television arrangements, but even for their exercise of control over the locale of their teams,” Stevens stated. A transcript of the speech is available on the Court’s website.

On May 16, Justice Scalia traveled to Raleigh, where he delivered the keynote address at the 2015 National High School Mock Trial Championship.

Also on May 16, Justice Sonia Sotomayor discussed the role of free speech in the arts at the Kennedy Center and Aspen Institute’s Arts Summit in Washington, D.C. Video of the panel is available via The Kennedy Center.

On May 19, Justice Scalia gave a lecture on the 800th anniversary of the Magna Carta at an event sponsored by the Supreme Court of Delaware and Delaware Bar Association. Meanwhile, Justice Stevens was in Washington, D.C., for a conversation hosted by Alliance for Justice and George Washington University, where he criticized the Court’s 2010 decision in Citizens United v. Federal Election Commission. Stephen Spaulding of Common Cause covered the appearance for The Huffington Post. Video of the event is posted on Alliance for Justice’s YouTube.

Two days later, Justice Scalia appeared in Durham for the United States Tax Court’s Judicial Conference, which was hosted at Duke Law School. Scalia participated in a presentation called “Lives in the Law”; the law school has coverage.

Justice Stephen Breyer, who served as the Chief Judge of the U.S. Court of Appeals for the First Circuit before he was confirmed to the Supreme Court, returned to Boston to speak at the Massachusetts Historical Society on May 28. The topic of Breyer’s lecture, “The Court and the World,” is also the name of his forthcoming book.

Justice Ginsburg received the 2015 Radcliffe Medal at Harvard University on May 29. Justice David Souter introduced Justice Ginsburg at the ceremony, recalling his thoughts on his former colleague back when Ginsburg first joined the Supreme Court: “I can’t reserve caution in my delight with Ruth.” The Harvard Gazette covered the event.

Justice Scalia gave a keynote speech at the Global Antitrust Economics Conference at the George Mason University School of Law on May 29.

Justice Sotomayor was the surprise guest at the Pompano Beach Middle School’s end-of-year award ceremony on June 1. “One of the wonderful things about graduating the eighth grade is that you have a chance—the best chance that you will ever have in life—to become what you want to become,” she told the class, which included one of the Justice’s nieces. Coverage of Sotomayor’s speech is available at the Sun-Sentinel’s website.

Justice Stevens and Justice Scalia also appeared on the graduation circuit this year. Justice Stevens received an honorary Doctor of Laws degree at Princeton’s commencement on June 2. On June 4, Justice Scalia spoke in Bethesda, Maryland, at the Stone Ridge School of the Sacred Heart, from which one of his granddaughters recently graduated. “It is much less important how committed you are than what you are committed to,” the Justice told the audience. “If I had to choose, I would always take the less dynamic, indeed even the lazy person, who knows what’s right rather than the zealot in the cause of error.” The Washington Post covered Justice Scalia’s commencement address, while the Montgomery Community Media posted the full video at its YouTube account.

On June 9, Justice Stevens returned to his hometown of Chicago, where Seventh Circuit Judge Ann Claire Williams interviewed him for a Justice Stevens shared some advice for life and lawyering in a PowerPoint presentation, including: “Think Best of People,” “Do Significant Amount of Unpaid Work,” “Keep Detailed Expense Records,” and “On Bad Day, Drink at Lunch.”

Looking ahead to the rest of June:

Justice Ruth Bader Ginsburg is slated to headline the American Constitution Society’s 2015 National Convention. She will sit down for a conversation with California Supreme Court Associate Justice Goodwin Liu on June 13.

Justice Sotomayor rounds out our June list of events with a trio of Washington, D.C., events. On June 15, Sotomayor will speak at the Burton Awards Fifteenth Annual Awards Program and Gala. She is slated to appear at the annual dinner of the Yale Law School Association of Washington, D.C., on June 17, and will receive the U.S. Senator John Heinz Award for Greatest Public Service by an Elected or Appointed Official from the Jefferson Awards Foundation on June 18.