Due process for Don Quixote at the Shakespeare Theatre

On Monday, the Shakespeare Theatre Company hosted The Trial of Don Quixote, a mock trial inspired by the musical Man of La Mancha, at the Sidney Harman Hall in Washington, D.C. Abbe Lowell, the chair of the theater’s Bard Association, opened the evening with a nod to politics, telling the audience that, as presidential candidates begin to have dreams and delusions, Man of La Mancha became the obvious choice for this year’s mock trial. 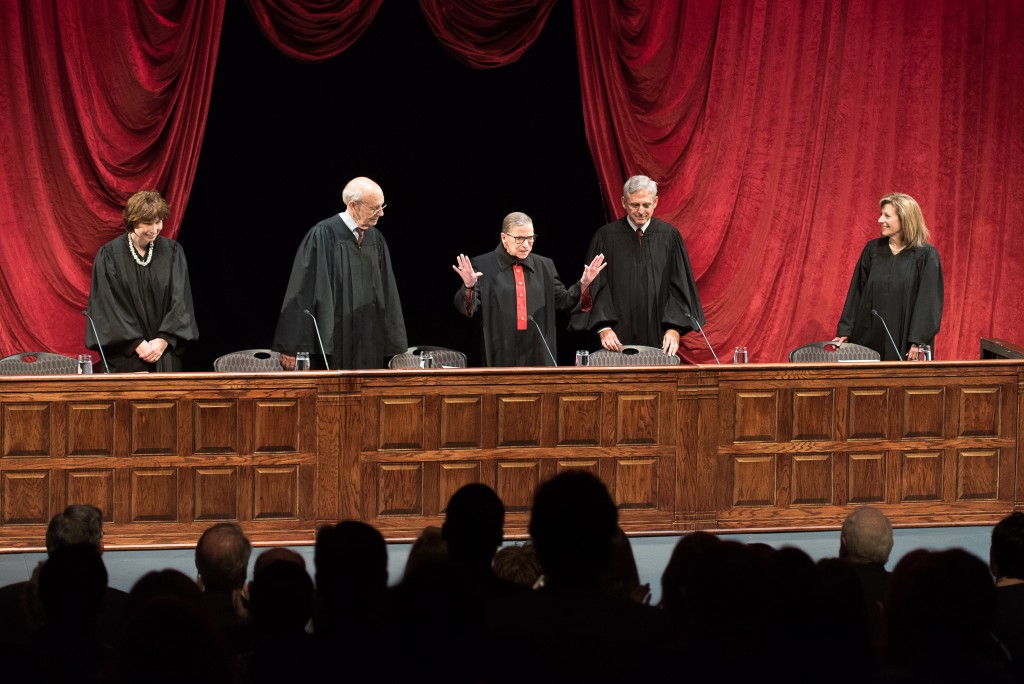 The question before the court was whether the Family Court of La Mancha had erred in its determination that knight errant Alonso Quixana — also known as Don Quixote — was mentally incompetent and required a guardian. And if the Family Court correctly determined that Alonso was not fully competent to manage his affairs, should it have rejected his niece Antonia’s petition for guardianship as being motivated by fraud and self-interest and instead have appointed Alonso’s loyal friend, Sancho Panza, to be his guardian?

This blog’s Tom Goldstein argued on behalf of Alonso that he did not need a guardian, while Carter Phillips of Sidley Austin defended Antonia in her quest for the guardianship.

In his opening argument, Goldstein asserted that Alonso believed that our society had become cold and call0us, and that Antonia was intent on proving him right. The Family Court – for the Ninth Circuit – had of course erred, and should be reversed: Alonso was not insane; he was a dreamer.

The first question from the bench came from Chief Justice Ginsburg, who pointed out that Goldstein had filed a brief titled “Retort courteous.” But because Alonso was the petitioner in the case, he should be petitioning, rather than retorting: “So,” she suggested, “it seems you should be terminated for ineffective assistance of counsel.” Goldstein countered, “Your honor, your views on procedure are notorious.”

In a follow-up, the Chief Justice worried that Alonso was a danger to both himself and windmills. Goldstein assured her that the windmill would be ok, and that, “[a]s we reach out to discover America, what we need is more inspiration.” Goldstein explained that just because someone falls off his horse, or his bike, it does not make him crazy or dangerous.

Unconvinced, Justice Jackson wondered, “How’s that dreamy, questy stuff workin’ out for ya?”

Justice Garland recalled the Court’s precedent in “NBC v. Brian Williams,” in which it had ruled that if someone says he was in battle, when he really wasn’t, then a guardian could be appointed for the host’s chair. Justice Garland’s observation brought up some sticky questions of foreign law, and whether the Spanish Court should consider such precedents.

Before a resolution on that point could be reached, Justice Breyer turned the Court’s attention to his concern for an incident with the barber (prefacing his concern with a remark about how Goldstein probably did not know any barbers) and asked whether Kim Kardashian might make a suitable guardian for the Don. “A family of woeful countenance,” Goldstein solemnly responded, and he quickly returned to his main point before reserving the remainder of his time: “In the role of knight errant, you might take on the character of greatness,” and that was not such a bad thing.

Phillips took the lectern to address the bench, noting that he’d been waiting thirty years to say, “Madam Chief Justice.”

To support his argument that Alonso was delusional, Phillips reminded the Court of the record in the case, in which the Don had been determined, by his doctor, Antonia’s fiancé, to be a crackbrain, “and I don’t think they meant drugs.” But his habits were just as destructive, if not more so, “What does Don Quixote spend his time doing?” Phillips asked. “He attacks helpless windmills, La Mancha’s only thriving industry.”

The Justices turned their focus first upon Antonia’s suitability as a guardian. Again, the Chief Justice asked the first question, wondering why Antonia should be appointed as guardian when she would lose her right to make contracts after she was married. Phillips suggested that the Chief Justice was stuck in 1800s America, but Spain was much more liberal. Justice Millett had another kind of concern, asking Phillips whether his “client, Antonia Nicole Smith, ha[s] a long history of trying to get her hands on old men’s money?” Phillips assured her that Antonia’s interest in Alonso was not romantic.

Returning to the question whether Alonso was delusional or inspirational, Justice Jackson asked Phillips whether it was his “position that our soldiers should only be half what they can be?” Phillips avoided her query, responding that soldiers should not be encouraged to be one and a half more than they can be.

Expanding on the question of Alonso’s delusions, Justice Breyer noted that an energy lawyer had told him at dinner that windmills have killed 600,000 bats, “They just popped.” So, the Justice wondered, “How do we know they’re not monsters?”

Phillips, it turns out, doesn’t like bats. He took Breyer’s finding to be evidence for the benevolence of windmills. “Yes, but, you know, bats eat mosquitoes and so on,” Justice Breyer urged, to no avail. Justice Garland tried another tack, “Do you want us to appoint a guardian for everyone who opposes renewable energy?”

The Chief Justice guided the discussion away from the matter of windmills back to more immediately pressing concerns. “If all the world’s a stage,” she asked from the stage, “how can we declare [Alonso] incompetent for acting on that stage?” Abraham Lincoln, Phillips responded, would disagree with her question.

Justice Garland tried another way, pointing out that Martin Luther King also dreamed a dream, “Should he have stayed in jail?” No, Phillips said, unlike the windmill-attacking Alonso, King was non-violent.

Justice Breyer worried about what kind of precedent the Court would be setting by ruling Alonso incompetent, “What about Walter Mitty? What about, ‘Yes, Virginia, there is a Santa Clause?’” “The question is not whether you can have dreams,” Phillips said, “but how you implement them.”

Justice Millett was not satisfied, and asked how we could tell the difference between dreams and delusions when “[a] member of the Spanish Congress mistakes his drab office for Downton Abbey.” To which Phillips replied that one must consider the totality of the circumstances.

In conclusion, Phillips told the Court that “Don Quixote is a wonderful dreamer, who needs the protection afforded by the court below.”

Goldstein began his rebuttal asking whether it was possible that Phillips ever took part in a mock proceeding for the purpose of inspiring others, “Alonso wants to shout inspiration from the rooftops, and Antonia wants to throw him off the roof.”

Justice Millett wondered whether, because of the Spanish Inquisition, Alonso might simply be under a little too much pressure. “Maybe instead of a guardian, he just needs Tom Brady?”

With that, the Justices adjourned to confer on the outcome of the trial. WETA’s Robert Aubry Davis joined Abbe Lowell for a brief discussion of how The Man of La Mancha and the tale of Don Quixote related back to Shakespeare. Davis asked Lowell why it’s so effective to have a trial take place in a play, creating a “play within a play.” Lowell suggested that trials invest observers in taking sides, which turns the audience members into participants, drawing them further into the play.

This was true of Monday night’s performance, after which audience members voted overwhelmingly that Alonso did not need a guardian. When they returned from their conference, the Justices agreed: he was a wonderful dreamer.

Justice Ginsburg closed the evening by announcing the Court’s holding: “If the world were populated by people who see it as it is, and not as it should be, how would civilization progress?”