If it is true that lawyers can make a simple proposition into something bewilderingly complex, it may also be true that judges sometimes prefer the simple, and go with that instead.  Justice Samuel A. Alito, Jr., proved the latter point in an argument on Wednesday, and the Supreme Court might be well advised to turn to the page in the transcript where he did so, and make that its ruling in Equal Employment Opportunity Commission v. Abercrombie & Fitch. 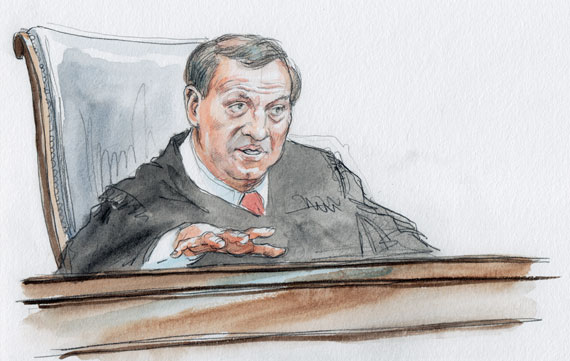 Two lawyers who seemed well schooled to make very refined though sometimes quite obscure points kept the Justices guessing for most of the hour about just what kind of ruling they were trying to bring about.  They persisted in doing so even though they were frequently told that they were not being clear or were not making sense.

But what actually was at stake, it seemed, was what two human beings might say to each other in a job interview in order for both to understand whether a new employee, if hired, could work by the company’s rules.   At a critical point in the argument, Justice Alito suggested an answer: Why doesn’t the employer tell the applicant what the rules are, and ask: “Do you have any problem with that?”   Simple, right?

What an employer lays down in its workplace rules can become a legal matter under federal civil rights law, if such a rule could be used to discriminate against a worker (or a job applicant) for an illegal reason.  In today’s case, the Court will be figuring out how to apply that legal approach when a worker claims to have been denied a job because of her religious belief or practice — a denial that may violate Title VII.

The case involves a young Muslim woman who wears a head scarf as part of her faith, but she sought a job at a preppy clothing store in Tulsa, Oklahoma, that won’t allow employees wear anything on their heads.  The Title VII question is whether the store discriminated against her because of her religion, when it might have hired her and found a way to accommodate her practice. 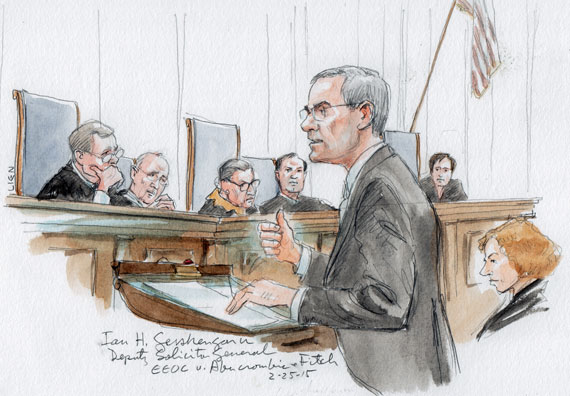 The federal government’s deputy solicitor general, Ian H. Gershengorn, and a Washington, D.C., lawyer, Shay Dvoretzky, went to the lectern to debate that point.  Through much complexity, their opposing positions seemed to boil down to this: the government lawyer thought the employer should have the legal duty to spell out its policy so that the job applicant knows what is expected.  The store’s lawyer thought the employer should not guess at religion, and so the job applicant should have to tell it that she needed an accommodation for her religion.

Would that they had made it that simple.

Gershengorn kept using a string of adjectives about what kind of knowledge the employer had to have about a conflict between a work rule and religion in order to act illegally in refusing to hire a person with religious scruples, and the Justices reacted with either sarcasm, ridicule or perplexity to the mental puzzle Gershengorn was putting before them.   “You are confusing me; what is it that you want?” Justice Antonin Scalia said.  “Why are you making it so confusing?” Justice Anthony M. Kennedy wondered.

Dvoretzky spent a lot of his time trying to show that the EEOC had switched positions in this case and abandoned a forty-year policy approach, and that tack kept drawing him back into an abstruse discussion of whether this is a “disparate treatment” case or a “religious accommodation” case.   The Justices tried their best to make sense of that, but, as Justice Sonia Sotomayor confided, “I’m still very confused.”  Justice Kennedy asked: “Is it disparate treatment — plus accommodation?…What am I missing?”

Justice Alito was not as active as some of the other Justices through much of the argument, although he had said enough to indicate that he was trying very hard to put a simple question in a simple way about how a job interview should go with Title VII in the background.

To that, Gershengorn responded: “I think that’s another way to phrase it.”

Actually, it might be the best way to say it in an opinion that clears up the matter entirely.