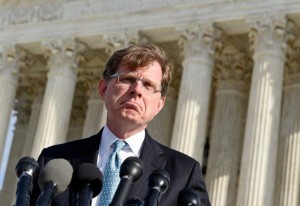 Today’s installment arrives neither any later nor any more disjointed than usual, despite a week full of obligations and fruitless efforts to appear thoughtful. It takes more than that to disrupt our crack team.

Two success stories from last week. In a tough break for the EPA, the Court granted cert. to first-time relists Michigan v. EPA, 14-46, Utility Air Regulatory Group v. EPA, 14-47, and National Mining Association v. EPA, 14-49, all of which challenge the EPA’s authority to regulate purportedly hazardous emissions of electric utilities without invoking the unimpeachable method of cost-benefit analysis. [Disclaimer: Lawyers at Vinson & Elkins LLP, whose attorneys “contribute” to this “feature,” represent one industry respondent in these cases.] Also granted was first-time relist City and County of San Francisco v. Sheehan, 13-1412, which asks whether the Americans with Disabilities Act requires police to make accommodations in their arrest procedures when the person they are taking in is mentally ill. Justice Breyer has recused himself, likely because his brother ruled on the case earlier. Although we timely identified that as a relist, it failed to make it in to our write-up because of a minor glitch in our quality control.

Leading off the denied relists is our dearest emblem of indecision, Ryan v. Hurles, 14-191. After a championship season of twenty-two relists last Term, and then three relists this Term, the Court has finally laid this petition to rest. As serial procrastinators now well know, the case involved (1) whether it is per se unreasonable for a state not to provide an evidentiary hearing on a judicial-bias claim, and (2) whether the ineffectiveness of post-conviction counsel can provide cause to excuse the procedural default of an ineffective-assistance-of-appellate-counsel claim. Because the only thing nerdier than a Relist Watch reader is a hardcore Star Trek junkie, we will bid Hurles adieu with the traditional Klingon farewell: Qapla’! Safe journey to Sto’Vo’Kor’!

Also denied after three relists was Joseph v. United States, 13-10639, asking whether the Eleventh Circuit’s appellate procedural default rule – prohibiting consideration of issues not raised in an appellant’s opening brief – conflicts with retroactivity rules when new precedent changes the law after briefing. Justices Kennedy and Sotomayor would have granted cert., but came up two votes short. Justice Kagan, joined by Justices Ginsburg and Breyer, issued a statement chastising the Eleventh Circuit for denying Joseph an opportunity to supplement his briefing in light of precedent arising after he filed his brief, but voted to deny cert., “deferring for now, to the Eleventh Circuit, in the hope that it will reconsider whether its current practice amounts to a reasoned exercise of its authority.” (Emphasis added, quotation omitted.) Hint, hint. The one-relist sojourn of Redd v. Chappell, 14-6264, likewise ended in denial, though not without criticism from Justice Sotomayor (joined by Justice Breyer) of the state’s foot-dragging in providing post-conviction counsel for petitioner’s state habeas claim. The petition asked whether the California Supreme Court violates the First Amendment right to petition for redress of grievances by barring prisoners represented in name only from making pro se filings.

Five old relists remain hunkered down in the Relist Bunker. The two senior relists, both now on relist number six since the record arrived, are Kalamazoo County Road Commission v. Deleon, 13-1516, about whether it is an “adverse employment action” or a “materially adverse action” when an employer grants an employee’s request for a job transfer that he winds up disliking, and Brumfield v. Cain, 13-1433, asking (1) whether a state court that relies entirely on proof presented at a petitioner’s penalty phase proceeding to decide his claim of mental retardation has based its decision on an unreasonable determination of facts; and (2) whether the court must fund an indigent petitioner’s attempt to obtain evidence of his mental retardation. Surely opinions of some sort are circulating among the Justices on these cases. And now that I’ve said that, watch the Court promptly just grant cert.

There has been telling activity in two of our middle-aged relists involving the First Amendment implications of a state’s decision to grant or deny specialty license plates to dodgy fringe groups. It looks like the Court may have chosen Walker v. Texas Division, Sons of Confederate Veterans, Inc., 14-144, as its preferred vehicle (“vehicle,” get it? Get it?) and relisted it for the third time, while Berger v. ACLU of North Carolina, 14-35, looks like it is now being held since the November 25 Conference, likely for Confederate Veterans.

Also on its third relist is Christeson v. Roper, 14-6873, a capital case that asks (1) whether an actual conflict of interest meets the “interests of justice” standard established in Martel v. Clair and requires substitution of conflict-free counsel, and (2) whether appointed counsel who procedurally defaulted the client’s federal habeas application by untimely filing the petition should continue their court appointment to argue that their own misconduct warrants equitable tolling. [Disclaimer: Tejinder Singh of Goldstein & Russell, P.C., whose attorneys work for or contribute to this blog in various capacities, filed an amicus brief in support of the petitioner in Christeson.] Lastly, what’s old is new again with Toca v. Louisiana, 14-6381, now on its first relist since arrival of the record (but fourth overall), which concerns the retroactivity of the Court’s decision in Miller v. Alabama, holding that life without parole for minors violates the Eighth Amendment.

Finally, on to the new additions. Crawling into the bunker with us is the newly relisted patent infringement case Commil USA, LLC v. Cisco Systems, Inc., 13-896; while the cross-petition Cisco Systems, Inc. v. Commil USA, LLC, 13-1044, was denied. The petition asks the Court to review two questions: (1) whether a good faith belief that a patent is invalid is a defense to inducement of infringement, and (2) whether actual knowledge that the defendant’s actions would induce infringement must be proved by the plaintiff. The government’s invited amicus brief agrees that the first question merits review, but disagrees that the second issue is worthy. Probably leading to the denial, the government also disagreed that the cross-petition (asking whether the Seventh Amendment permits a court to order a partial retrial of induced patent infringement without also retrying the related question of patent invalidity) merited cert.

BP Exploration & Production Inc. v. Lake Eugenie Land & Development, Inc., 14-123, has been rescheduled for the second time; it presents the question whether a district court may certify a class that includes numerous members who have not suffered an injury caused by the defendant. And finally, with a name you need a calculator to pronounce, Sigram Schindler Beteiligungsgesellschaft MBH v. Lee, Acting Director, Patent & Trademark Office, 14-424, was also rescheduled. Near as we can tell (we’ve been unable to obtain the papers from counsel), the case involves the jurisdiction of the U.S. District Court for the District of Columbia to entertain a challenge to a determination by the U.S. Patent and Trademark Office that a patent was invalid for obviousness. Either that or they are seeking review of the finding of obviousness. Or maybe something else. Has this been helpful to you?

Just two more Relist Watches remain for 2014! Thank you for joining us on this countdown to glory. And thanks to Conor McEvily and Ralph C. Mayrell for compiling and drafting this update.

(relisted after the November 7, November 14, and November 25 Conferences)

(relisted after the October 31, November 7, November 14, and November 25 Conferences)

(relisted after the November 7, November 14, and November 25 Conferences)

(relisted after the November 25 Conference)