Opinion analysis: Testimony about juror statements during deliberations not admissible to show dishonesty during voir dire 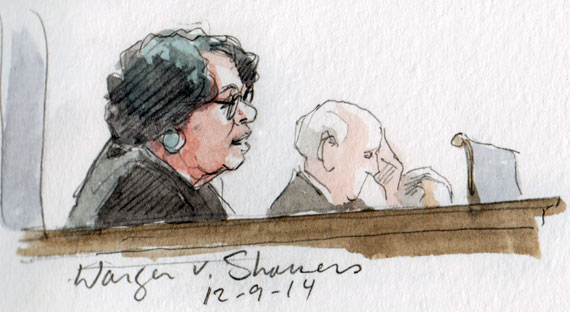 Justice Sotomayor delivering the opinion of the Court.

In Warger v. Shauers, the Court examined Federal Rule of Evidence 606(b), which generally prohibits the testimony of jurors about statements made during deliberations when the testimony is offered in “an inquiry into the validity of a verdict or indictment.” In a unanimous opinion by Justice Sotomayor, it held that Rule 606(b) precludes a party seeking a new trial from using a juror’s affidavit about statements made by another juror during deliberations to show that the second juror gave dishonest answers during voir dire.

The case arose from a personal injury action involving a collision between Warger’s motorcycle and a truck driven by Shauers. During jury selection, Warger’s counsel asked whether jurors would be unable to award damages for pain and suffering or whether there was any juror who thought, “I don’t think I could be a fair and impartial juror on this kind of case.” Regina Whipple, a prospective juror who later was selected as foreperson, answered “no” to these questions. After the jury returned a verdict in Shauers’s favor, Wargers moved for a new trial. He supported it with a juror’s affidavit that was offered in an attempt to show that Whipple had been dishonest in her answers during voir dire. The affidavit alleged that Whipple had argued against a verdict for Warger by saying that her own daughter had been at fault in a fatal automobile accident and that, if her daughter had been held liable, it would have “ruined her life.” The affidavit was offered in support of a claim that a new trial should be granted because of dishonesty during voir dire.
The trial judge denied the motion for a new trial, and the Eighth Circuit affirmed. After acknowledging a split among the courts of appeals, the Eighth Circuit joined those which held that Rule 606(b) prohibited juror testimony about statements made during deliberations that were offered to show that a juror lied during voir dire.

The Court began by stating that it was simply according the terms of Rule 606(b) their “plain meaning” by holding that the rule applied to juror testimony during a proceeding in which a party seeks to obtain a new trial because a juror lied during voir dire. The motion for a new trial plainly entailed an “inquiry into the validity of a verdict.”

The Court then reviewed the history of the prohibition on juror testimony about deliberations, noting that Rule 606(b) had its genesis in a 1785 decision by Lord Mansfield that soon took root in the United States. Reviewing the American decisions before the Federal Rules of Evidence, it concluded that the Court had ultimately opted for “the federal approach” –a broad version of the rule prohibiting juror testimony – in a 1915 case holding that juror affidavits were not admissible to show that the jurors had .entered a “quotient” verdict. It distinguished Clark v. State, a 1933 case on which Warger relied, on the ground that the Clark case involved a contempt prosecution of a juror who lied during voir dire, not a case in which the lying was used in an attempt to overturn the verdict.

The Court noted that whatever the state of prior precedent, Congress was free to adopt a broad rule when the Federal Rules of Evidence were enacted in 1975. The language of Rule 606(b) clearly adopted the broad “federal approach,” prohibiting the use of evidence of juror deliberations subject only to exceptions for extraneous information and clerical errors. (A later amendment added an exception for mistakes in entering the verdict on the verdict form.)

In apparent recognition that the Court’s unanimous opinion had to satisfy colleagues with divergent views about the value of legislative history, Justice Sotomayor noted that “For those who consider legislative history relevant, it confirms that this choice of language was no accident.”

The Court also rejected Warger’s argument that the testimony fell under Rule 606(b)’s exception for “extraneous prejudicial information.” It said that the phrase “extraneous information” refers to information from a source “external” to the jury, such as publicity related specifically to the case under consideration. The experience jurors bring to the case is “internal” information. The anecdote involving the foreperson showed something about her views about negligence liability for car crashes, but it did not provide the jurors with any specific knowledge concerning Shauer’s collision with Warger.

Warger had argued that excluding his evidence about statements during deliberations was unnecessary to accomplish Congress’s objectives of encouraging free and open debate in the jury room and preventing harassment of jurors. The Court responded that “Warger cannot escape the scope of the Rule Congress adopted simply by asserting that its concerns were misplaced.”

The Court rejected the argument that the canon of constitutional avoidance required it to construe the statute in Warger’s favor. It had a twofold answer: first, the canon applied only when a statute was ambiguous, and second, the argument that Rule 606(b) was unconstitutional was foreclosed by its 1987 decision in Tanner v. United States, in which it rejected the argument that excluding evidence that jurors were intoxicated violated the defendant’s Sixth Amendment rights to an impartial and competent jury. Here, as in Tanner, other safeguards were sufficient to protect those rights.

Warger and one of his amici had argued that allowing juror testimony about statements made during deliberations was important because it might reveal that jurors had lied in denying racial bias during voir dire. Possibly in response to this argument, the Court dropped the following footnote to its discussion of constitutional issues: “There may be cases of juror bias so extreme that, almost by definition, the jury trial right has been abridged. If and when such a case arises, the Court can consider whether the usual safeguards are or are not sufficient to protect the integrity of the process. We need not consider the question, however, for those facts are not presented here.”

To summarize the case in plain language: After a traffic accident, a motorcycle rider sued for his injuries. The jury ruled against him. The motorcyclist then asked for a new trial, because he said that one of the jurors lied when she answered questions during jury selection about her attitude toward accident lawsuits. To prove she lied, the motorcyclist asked the judge to take into account a sworn statement by another juror. That statement described things that the first juror allegedly said in the jury room. The judge refused to consider the sworn statement. The Supreme Court upheld the judge’s decision, relying upon a rule of evidence that prohibits almost all testimony about what jurors say to each other while they are deciding a case.