Argument preview: When does a difference in tax treatment amount to a proscribed discrimination? 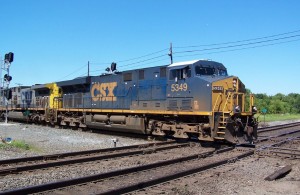 This case is about Section 11501(b)(4) of the Railroad Revitalization and Regulatory Reform Act of 1976 (the “4-R Act”), which prohibits a state from “impos[ing] another tax that discriminates against a rail carrier.” Wait, where are you going? This case, which has already been before the Supreme Court once, not only involves interesting questions of statutory interpretation, but also implicates fundamental questions about the meaning of “discrimination” in the tax context (and beyond). Indeed, the resolution of the case may require the Court to appeal to deep structural principles beyond tax. Both sides have reasonable arguments based on the text of the statute, legislative history, and policy. Thus the resolution of the case may turn on whether or not federalism concerns indicate that there should be a thumb on the scale in favor of a narrower construction of a statute that preempts state authority.

Put roughly, here are the facts. Alabama charges sales tax on the fuel purchases of railroads; it does not charge the sales tax on the fuel purchases of motor carriers – such as trucks. Because a federal statute bars discrimination against railroads, the railroad CSX Transportation, the respondent in this case, argues that the Alabama sales tax violates the 4-R Act. Not so fast, says Alabama, the petitioner in this case: Motor carriers pay a separate excise tax on their purchases of fuel, a tax that rail carriers do not pay. Surely, counters Alabama, when Congress prohibited “discrimination” it expected courts to be able to look at more than one section of a state tax code.

The two questions before the Court are as follows:

1) When the statute forbids “discrimination,” to which comparison class should the lower courts look? Should the Court read in a comparison class from the immediately preceding subsections of the 4-R Act, or did Congress specifically not wish to include that limitation?

2) If a court finds facial discrimination, can a state defend it by pointing to the operation of its larger tax system? The statute does not specify that such a justification could be availing. On the other hand, it would seem like there could not be a discrimination if the difference in treatment were justified.

Let’s return to the facts. Alabama imposes a general sales and use tax which is based on the value of the item purchased. When railroads purchase diesel fuel, they must pay the tax. However, two competing businesses are exempt from paying the same sales tax on their purchase of diesel fuel: – motor carriers and interstate water carriers (that is, ships). The motor carriers pay a different tax, a per-gallon excise tax on their purchase of diesel fuels. The water carriers do not pay the excise tax; they have been exempt from the sales tax since 1959 because the state believed that the dormant Commerce Clause prevented it from imposing the tax.

The procedural history of this case indicates its difficulty. During its first trip up to the Supreme Court, the district court dismissed CSX’s complaint; the Eleventh Circuit affirmed on the ground that subsection 11501(b)(4) of the Act cannot be used to challenge a sales tax “exemption” (as compared with a property tax exemption, which the Court had already held cannot be challenged under the Act).

The Supreme Court rejected that argument, held that a sales tax exemption could result in a prohibited discrimination, and remanded the case to the lower courts. Justices Clarence Thomas and Ruth Bader Ginsburg dissented from that disposition, on the ground that Alabama’s scheme clearly did not violate the Act. These two Justices argued that there must be a comparison class implicit to subsection 11501(b)(4). They found that the relevant class was the comparison class established for property tax discrimination purposes in the immediately preceding subsections of the Act – namely, “commercial and industrial taxpayers.”

On remand, CSX lost before the district court and won before a divided panel of the Eleventh Circuit.  Both the district court and the Eleventh Circuit found that the appropriate class to which to compare CSX was other competitors, rather than the broader class of commercial and business entities. That competitors constitute the appropriate comparison class is the position currently advanced by CSX before the Court. The district court, however, went on to find that the Alabama sales tax exemption for motor fuel did not amount to discrimination because of the complementary fuel excise tax. It found that, in fact, the charge paid by motor carriers was generally higher than that faced by railroads. As for water carriers, the district court found no discrimination because, among other reasons, the railroads had not shown that the water carriers were truly competitors.

The Eleventh Circuit reversed. Specifically, it held that Alabama could not justify its facial discrimination through the sales tax by appealing to the motor fuel excise tax. The court of appeals held that the statute does not indicate that courts should assess the treatment of railroads by looking at the tax system as a whole, and with good reason, because such an inquiry would amount to a “Sisyphean burden.” The dissent countered that the there is no giant rock for courts to deal with, as a court need only compare the tax treatment of one industry to that of its competitors as to one tax.

Before the Court in this case, CSX and its amici defend and elaborate upon the opinion of the Eleventh Circuit.   Congress could have defined discrimination in subsection (b)(4) as relative to a specific class, as it did in the earlier provisions of the same statute, but it did not. Therefore, this kind of discrimination vis-à-vis competitors should be held to violate the statute. Furthermore, because one of the rationales of the 4-R Act was to protect the fiscal integrity of railroads, interpreting this provision in a way that protects the railroads from a tax provision that benefits their primary competition is consistent with the purpose of the Act.

The state counters that the correct comparison class is to commercial and industrial entities, as Justice Thomas had argued. This interpretation is also consonant with the purpose of the statute, as it protects railroads, as interstate entities, from being treated less well than the average in-state business entity. (Note that if a majority of the Court agrees with Alabama (and Justices Thomas and Ginsburg) on this question of comparison class, then the Court need not reach the second question as to the scope of the discrimination analysis.)

As to the scope of the discrimination analysis, Alabama argues that it does not make sense for courts to find a tax discriminatory without looking at the broader tax system – if there is an offsetting charge, then where is the discrimination? Furthermore, in the context of the dormant Commerce Clause, the Court has long accepted the possibility that the existence of a complementary tax could justify a seeming instance of discrimination. Not only does the complementary tax doctrine demonstrate the correct analysis of the concept of discrimination, but this doctrine was well established when the 4-R Act was passed and therefore Congress should be presumed to have assumed it would be applied.

CSX and its amici – including Walter Hellerstein, the leading state and local tax scholar, who is counsel of record for the Tax Foundation – strongly object to the importation of the complementary tax doctrine into the 4-R Act. First, the Act does not provide an opportunity for a state to justify its discrimination. Second, the Eleventh Circuit was correct that evaluating such a justification would be Sisyphean. In this case, for instance, because the two taxes are levied on different tax bases – the volume of fuel versus the price of fuel – the analysis would need to be updated regularly. Worse, other states have different sets of taxes and exemptions. Furthermore, if there is to be a more holistic analysis, why limit the analysis to a comparison of the sales and excise taxes? Railroads also pay more in property taxes and maintain their own rights of way, while motor carriers enjoy rights of way paid for by their motor fuel excise taxes as well as other taxes. Indeed, if the goal is to treat tax systems realistically, should courts not also consider which entity bears the true economic burden of a tax — that is, its incidence?  Yet tax incidence analysis is a shifting and tentative endeavor, even for trained economists.

It would seem likely that the Court, as in the first go-round for this case, will try to resolve the questions here narrowly, grounding its answer in the text of the statute, such as it is. Nevertheless, given the import of the notion of “tax discrimination” to other federal statutes and to the dormant Commerce Clause in general, even a narrow answer could well have broader implications.

Recommended Citation: , Argument preview: When does a difference in tax treatment amount to a proscribed discrimination?, SCOTUSblog (Dec. 5, 2014, 11:50 AM), https://www.scotusblog.com/2014/12/argument-preview-when-does-a-difference-in-tax-treatment-amount-to-a-proscribed-discrimination/