Argument analysis: Finality and a tale of two rules

Lawyers for both parties faced skeptical questioning in Tuesday’s arguments in Gelboim v. Bank of America. Tasked with deciding the appealability of a decision dismissing all claims in an action that is part of a consolidated MDL action, the Court considered competing approaches that exposed questions about the meaning and scope of particular rules and that may or may not make much practical difference. 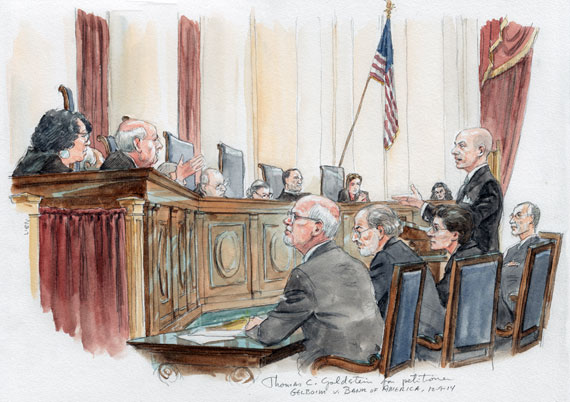 Arguing for petitioner Ellen Gelboim, Thomas Goldstein identified three points that gave his client an immediate appeal of right, themes he returned to throughout the argument. First, Gelboim had a unique case with “our own complaint, our own docket, our own lawyers, our own plaintiffs, and our own defendants” and that action had been dismissed, producing a final-and-appealable judgment. Goldstein repeatedly reminded the Court of the individual nature of each action within an MDL; although they are brought together, administered together, and sometimes have orders entered together, they remain separate actions that are initiated and dismissed separately. Second, the MDL itself would not produce a final judgment, so Gelboim would have nothing to appeal from if she had to wait and no sense of when she will be able to appeal. Third, Federal Rule of Civil Procedure 54(b), which allows a district court to certify for immediate appeal a decision resolving fewer than all claims or parties in an action, is inapplicable by its terms, because each action in the MDL retains its separate quality.

But Goldstein recognized the policy concerns of avoiding piecemeal litigation and needing to vest judges with flexibility and discretion in controlling MDL proceedings. Given Rule 54(b)’s inapplicability, district courts need other, more appropriate tools available to district courts. One is Federal Rule of Civil Procedure 58(b), which allows a district court to decide a claim in an individual action but to delay entering final judgment. The effect is to stay that action, since no claims remain pending, without providing a judgment from which the party could appeal. The court in MDL 1935, In re Chocolate Confectionary Antitrust Litigation, used Rule 58(b) in this way. Goldstein spent time fending off suggestions from three different Justices (Anthony Kennedy, Ruth Bader Ginsburg, and Sonia Sotomayor) that such an approach is “disingenuous,” because district courts decide issues but hide the ball by not issuing judgments. Goldstein rejected this characterization, emphasizing (in response to a question from Justice Elena Kagan) that this approach gives a district judge the same discretion and control over when appeals can be had, by entering judgment at the point she wants the decision to be final and believes appeal appropriate. In other words, Goldstein conceded, there may be little practical difference between a district court using Rule 58(b) or Rule 54(b).

But the former is the more appropriate source of that discretion and flexibility; as Kagan prompted, it is “important to get the rules right.” Goldstein later echoed this point in insisting that the Court should “apply the actual statutes and rules.” Rather than creating confusion over the definitions of “action” and “judgment” and rather than changing the meaning of Rule 54(b), the answer is to rely on the appropriate rule and the discretion it gave district courts with respect to entry of judgment.

Goldstein got more traction from his argument that, if the dismissal order is not final and appealable, it leaves parties in limbo as to when they can appeal, when they must appeal (because the jurisdictional thirty-day clock is running), and from what; several Justices expressed sympathy for this argument. An MDL often ends not with a judgment, but with an administrative recommendation to the Judicial Panel on Multidistrict Litigation that the case is over, perhaps with a docket notation that the MDL is closed. None of that constitutes a judgment that is appropriate for appeal or that tells a party in Gelboim’s position when it is time to appeal.

During rebuttal, Goldstein identified a second tool for limiting piecemeal appeals, calling it one of the most common in MDL litigation: The district court can create a consolidated “master complaint” or “administrative complaint,” under which each action does become a claim that the MDL court can resolve for purposes of the master complaint and the MDL docket, without rendering a decision in the individual action and thus without producing a final judgment in the individual action. And because there is no judgment, there is no appeal. Both Justices Ginsburg and Sotomayor expressed some surprise about this mechanism, which is not mentioned in the rules or the MDL statute. But Goldstein said this gives district judges the necessary flexibility, without doing violence to the language of the Federal Rules. While the district court did not do that with Gelboim’s action here, it would have eliminated the problems created when the court dismissed her antitrust claims.

Arguing for the bank, Seth Waxman criticized “what’s now been the accepted terminology of the disingenuous approach” to achieving flexibility in the district court and avoiding piecemeal appeals. Such “guerilla judging” is unnecessary, he insisted, because Rule 54(b) is specifically designed to control appeals in this situation and courts have been using it for that purpose.

But this argument drew quick responses from several Justices doubting that the rule could do what Waxman insisted it did. Justice Samuel Alito suggested that this worked only if the Gelboim case was tantamount to a single claim in a broader MDL action, which required “more than perhaps a little bit of pounding to fit that in there.” Justices Ginsburg and Alito together emphasized the absence of any language in the MDL statute indicating that MDL consolidation creates a single action for Rule 54(b) purposes. And in response to Waxman’s insistence that every district court has interpreted Rule 54(b) this way, Justice Kagan said simply, “Well, you know, maybe they’re wrong.” For Kagan, while it was important to give district judges flexibility, they must find that flexibility in the correct provision, rather than using Rule 54(b) for a purpose for which it was never designed.

Justice Stephen Breyer (and Justice Sotomayor) then moved Waxman to the issue that Goldstein had raised about when the clock for appeal begins running for parties in Gelboim’s position and what they are appealing from. Waxman insisted the period begins when “all of the other consolidated proceedings, cases, have resolved or been transferred.” But there was no clear resolution of what exactly Gelboim would be appealing from at that time (a point Goldstein hit in rebuttal). Instead, this led to a tangent on whether the district judge had entered a judgment on the dismissal of Gelboim’s claims, with Waxman sparring with Justice Antonin Scalia and Ginsburg over what the district court did and what the Second Circuit meant in saying “a final order has not been issued by the district court as contemplated by 28 U.S.C. § 1291.” Chief Justice John Roberts framed this as concern for fairness to the parties, wondering how many years parties such as Gelboim are “supposed to sit around and wait for the big fish to resolve their cases.” Waxman’s answer was that parties do not have to wait for years because district courts regularly certify Rule 54(b) appeals. And the district judge in this case might eventually certify, once she has more fully resolved additional issues. While that still creates piecemeal appeals (as the Chief Justice pointed out), Rule 54(b) serves its purpose of giving district judges discretion and control over how and when those piecemeal appeals occur.

Questioned by Justice Ginsburg, Waxman closed by identifying a meaningful distinction between using Rule 54(b) and Rule 58(b) to maintain the necessary judicial discretion and control. The practical difference, he argued, goes to where the default lies. Under the common approach to Rule 54(b), the appeal cannot go forward unless and until the district court makes the findings required under the rule. Under the proposed approach of Rule 58, the piecemeal appeal goes forward unless and until the court orders that judgment not be entered. The former, with its presumption again piecemeal appeal, better serves the judicial system and the policies of finality.

Justice Breyer summed up the divide in the argument in an exchange with Waxman. The problem with the bank’s position that the decision is never final until the district court certifies an appeal under Rule 54(b) is “you have to muck around with the word ‘action,’” treating multiple actions as a single action with multiple claims while it is consolidated. The problem with Gelboim’s reliance on Rule 58(b) is that nobody has done it and everyone has believed the Rule 54(b) approach is right without anyone talking about it. The question, Breyer said, is where to strike the balance. That is what the Justices must decide.

[Disclosure: Goldstein & Russell, P.C., whose attorneys contribute to this blog in various capacities, serves as counsel to the petitioner in this case.]