Puzzled about just what kind of entity Congress created when it set up Amtrak to run the nation’s passenger trains, the Supreme Court spent an hour Monday trying to decide the future of that system and, indeed, whether even to decide or hand this dispute back to a lower court.  In the case of  Department of Transportation v. Association of American Railroads, Amtrak’s future is very much on the line because the case turns on how to assure that its trains run on time, and thus how it can keep customers coming back to its service.

But the case as it reached the Justices is not about operating efficiency; rather, it is about what the Constitution may have to say about who writes the rules to govern railroad traffic and how such rules get enforced.  The Court seemed determined to avoid any revival of an old constitutional doctrine to decide that question, and yet it appeared unsure about whether it could make use of an alternative constitutional approach. 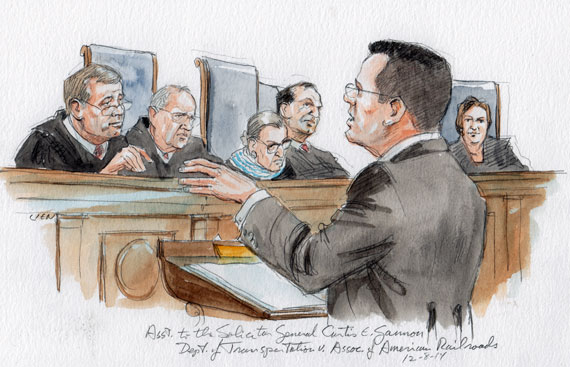 Assistant to the Solicitor General Curtis E. Gannon for the Department of Transportation

Here is where the argument seemed to come out: the Court clearly was not inclined to judge Amtrak’s role in helping write rules on such things as on-time performance by testing whether the profit-oriented company exercises powers that belong to Congress — a test that the Court has not used in seventy-eight years.

More attractive to an apparent majority of the Court was to apply a basic test of fairness, under the Constitution’s Due Process Clause — in this case, fairness to the freight-hauling railroads that have to let Amtrak’s passengers have the right of way on their tracks.  The problem with turning to that approach, though, is that the Justices may have to let a federal appeals court apply it first, before they can reach it.

It did not take long in Monday’s one-hour argument for Justice Antonin Scalia to make it plain that he would work diligently to steer the Court away from putting back into use the long-avoided non-delegation doctrine, last applied to nullify a federal law in the New Deal era case of Carter v. Carter Coal Co.

The Department of Transportation’s lawyer, Curtis E. Gannon, an assistant to the U.S. Solicitor General, had opened by ticking off his argument against the Court using the non-delegation doctrine to strike down a 2008 law that gave Amtrak a share in writing regulations to govern performance of passenger trains — a set of rules that will clearly affect the facilities of the freight railroads, who own the tracks.   He was focused on that issue, of course, because it was the one the U.S. Court of Appeals for the District of Columbia Circuit had used to strike down that 2008 statute.

One of Gannon’s points is that Amtrak is really a part of the government, so giving it a regulatory role did not amount to giving it part of Congress’s legislative authority.  But Scalia said the question of Amtrak’s basic identity would not solve the due process problem in letting it write rules to govern others’ conduct.  “Even if it is a governmental entity,” the Justice said, “there are some things that the government can’t do.”  That, he said, invokes the Due Process Clause.

While Gannon tried to counter that the lower court had not ruled on that, Scalia said it was an issue now before the Court.  The Justice’s comments led the Court into an exploration of just how the standards-setting role Congress gave to Amtrak would work.  The issue they were confronting was not what Amtrak is, but whether what it does actually amounts to regulating, and it seemed plain that they were examining it mainly from the due process perspective.

The probing by the Justices, creating the impression that Amtrak’s role was getting into deeper trouble, led Justice Stephen G. Breyer — with some exasperation — to plead with Gannon to say something to “calm me down.”  What he was worried about, Breyer said, was that thousands of government programs allow private actors to devise standards, and a ruling that barred Amtrak from doing so would have a very wide impact.  “I have a feeling it would work havoc,” perhaps even for the current regulatory regime for the Internet and with U.S. treaty partners, the Justice commented.

Unhelpfully, Gannon responded that that would “depend upon how broad the ruling” coming from the Court would be.

After the Breyer interlude, the Court went back to its close examination of how Amtrak’s standards-setting works, and whether it is properly supervised by government officials.

Justice Breyer, though, did not want to go there.  He remarked that “once the Court starts down the road” to second-guessing the roles that Congress gives to private entities like Amtrak, “there is no stopping place.”  He said the Court was “off on something of a wild-goose chase in this case.” 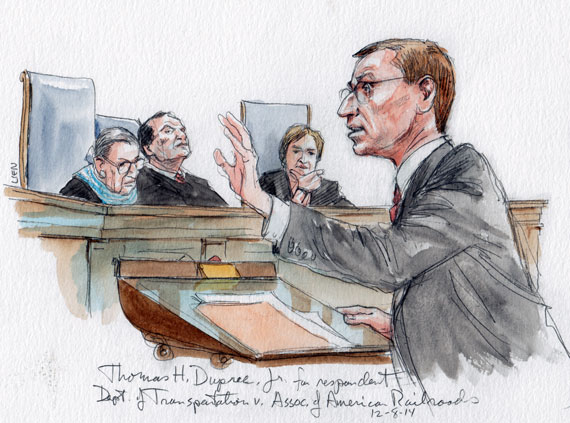 Thomas H. Dupree, Jr. for the Association of American Railroads

The lawyer for the trade group of the freight railroads, Washington, D.C., attorney Thomas H. Dupree, Jr., who had made sure to add the due process question to his brief in the case, opened by arguing that Amtrak had been handed “regulatory authority over other companies in the [rail] industry.”

But the members of the Court who seemed most sympathetic to Amtrak  — Justices Breyer, Ruth Bader Ginsburg, and Elena Kagan — tried to play down the role that it had been assigned by Congress.   Ginburg and Kagan repeatedly stressed how much government officials did to keep an eye on how Amtrak used its rulemaking powers, never being allowed to do so on its own.

One of Dupree’s arguments is that, when Congress created Amtrak in 1970, it made a point of saying explicitly that it was not a part of the government but was to be a private, profit-making company.  The Court, he said, “is entitled to take Congress at its word.”  And he quoted Amtrake executives as having boasted in the past that “we are hungry capitalists” eager for a profit.

But Justice Kagan, in particular, belittled the importance of that kind of “label,” saying it did not alone prove that Amtrak was a private firm armed with significant public policymaking power.

That led Justice Scalia to return to the fray, asking rhetorically “what difference does it make” what one said about Amtrak’s identity, when the issue was whether it was using its assigned powers in a way that violated the Due Process Clause.

When Justice Ginsburg said, and repeated, that the D.C. Circuit had not ruled on the freight railroads’ due process challenge, Dupree answered that his clients had raised the issue “at every stage of the case” and it was, in fact, now directly “set up for the Court’s review.”

Justice Breyer, apparently sensing that the trend of the argument was, indeed, moving toward the due process question, suggested by several questions that he doubted that the freight lines had any basis for claiming that Amtrak’s role as a standards-setter infringed on any of their due process rights to a fair government process.

And, he once again revealed his anxiety over a ruling that would go against Amtrak, saying that it not only raised the prospect of bringing back the Carter decision from 1936, but also the much-discredited 1905 decision by the Court in Lochner v. New York — the high point of a laissez-faire Court’s resistance to government regulation of business.   “Are we supposed to resurrect that?” Breyer asked, somewhat plaintively.

Dupree’s time at the lectern ended with Justice Kagan again trying to stress the point that “there is government all over this, at every step” — a last-ditch effort to make the case that Amtrak is not just a private entity acting alone to promote its own commercial interests.