If a state makes it a crime to issue false statements during an election campaign, as sixteen states now do, such a law is open to a constitutional challenge by a group once accused of violating it and at significant risk of being accused again, the Supreme Court ruled unanimously on Monday.

The decision appeared to break little new ground on the right to test in court a law that is claimed to interfere with rights of free speech under the First Amendment.  The decision in Susan B. Anthony List v. Driehaus, however, said nothing about whether such a test should or would succeed in nullifying the law. 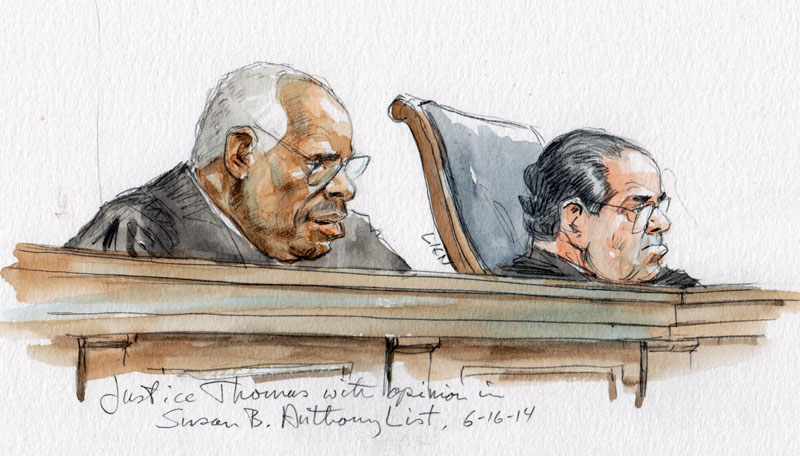 Ohio’s false statement law, at issue in this case, makes it a crime with punishment of up to six months in jail and a fine of up to $5,000 to put out campaign literature or advertisements that say anything known to be false about a candidate’s voting record.  The law also assigns a state agency, the Ohio Elections Commissions, to police falsity in campaigning, with the authority to reprimand for violations.

Those two prospects — criminal prosecution and a commission probe — are enough in combination, the Court declared, to pose a significant risk that they will be used against activist groups that had faced an earlier complaint, and that plans to say again in the future the same thing that got them into trouble before.

It is not necessary, Justice Clarence Thomas wrote for the Court, that an actual complaint be on file before a group confronting that kind of risk can sue to get the law overturned in court.

This case involved two groups that are opposed to abortion, and that did — or planned to — go after a Democratic congressional candidate who had voted in favor of President Obama’s measure seeking a broad new reform of the nation’s health care system.  The two groups’ message was that a vote for the Affordable Care Act was a vote in favor of spending federal taxpayer money to pay for abortions.

One group, the Susan B. Anthony List, had actually put out public statements to that effect about Rep. Steven L. Dreihaus, a Democrat, when he was running for reelection in 2010.  He complained to the Elections Commission that this was a false statement, because his vote was for the Act as a whole, and not explicitly for funding of abortions.  The case led to a commission finding that the group had used falsity in its charge against Driehaus.

The Commission case ended when Driehaus took an assignment overseas with the Peace Corps.  Even so, Susan B. Anthony List sued in federal court to challenge the law; it was joined by another anti-abortion group, the Coalition Opposed to Additional Spending and Taxes, which had planned to say the same thing about Driehaus, but claimed it was silenced by the existence of the state law.

The U.S. Court of Appeals for the Sixth Circuit ruled that the two groups had not made a sufficient point that they actually faced prosecution or administrative review in the future, because it was not clear that the same factual situation would arise in a future campaign.

The Supreme Court overturned that result, concluding that both of the groups were sufficiently at risk of “imminent” prosecution or commission review as to enable them to file their First Amendment challenge.  The Court, though, sent the case back for lower courts to decide whether the two groups could satisfy the other basic requirements for having a right to sue.