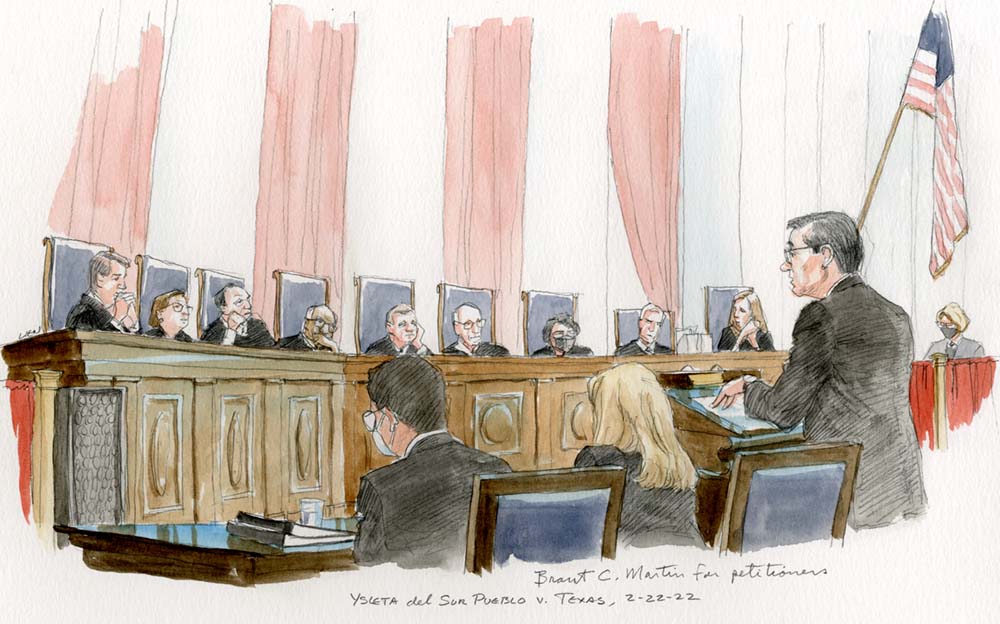 Tuesday’s argument in Ysleta del Sur Pueblo v. Texas was another instance of a common jurisprudential problem for the justices: how should a modern court, largely devoted to textualism in its statutory interpretation, deal with cases about Native American tribes, which traditionally have depended on historical and contextual understandings only weakly linked to the text of the statute.

The particular case involves a statute that governs two of three Native American tribes that remain in the state of Texas, the petitioner Ysleta del Sur Pueblo (a tiny reservation near El Paso) and the much larger Alabama-Coushatta reservation in East Texas. The statute that restored a federal trust relationship for those tribes in 1987 (the Restoration Act) included a provision that barred gambling activity on the reservations that is “prohibited” by Texas law. Texas has argued successfully in the lower courts, for more than 30 years, that this reflects a traditional literal understanding of “prohibit.” For example, bingo is at the core of the dispute and Texas law permits bingo in some cases, but it prohibits it for any entity that operates for profit. Because tribal casinos would operate for profit, Texas argues, bingo is prohibited on the reservations.

The Pueblo (and also the Alabama-Coushatta), by contrast, argue that the reference to “prohibited” activities is a short-hand reference to the Supreme Court’s 1987 decision in California v. Cabazon Band of Mission Indians, which distinguished between types of gambling that a state prohibits outright (craps, for example, is not permitted at any casino in Texas) and those that are permitted but regulated. Under the dichotomy of Cabazon, Texas prohibits craps (and thus it would be barred in tribal casinos), but because Texas only regulates bingo, rather than prohibiting it outright, bingo would be permitted in tribal casinos.

Several of the justices noted the weakness of the Pueblo’s argument as a matter of text. Chief Justice John Roberts, for example, referred to a provision capping the size of permitted bingo games at $100, and suggested that “if you told somebody that they have games up to $1,000, it would be perfectly natural for that person to say, well, that’s ‘prohibited’ because there’s a $100 cap.” Justice Elena Kagan agreed that the tribe’s reading is “not the normal use of the word ‘prohibited.’”  The Pueblo, she said, are arguing “that Cabazon turns this language into a kind of term of art and that Congress … was incorporating this distinction that had been made in Cabazon.”

At the same time, several justices seemed to agree as a matter of historical fact that the statute was drafted with reference to Cabazon. Kagan, for example, seemed to embrace the argument of Anthony Yang (representing the United States, in support of the Pueblo) that “Cabazon is all over this statute. In other words, it’s not just saying, oh, look, … Cabazon said something about ‘prohibit.’ …[Y]ou’re making the case that if you just look at this entire statute, Cabazon is pretty much all over it.” Other justices chimed in with support for that point, with Justice Amy Coney Barrett in particular noting that other statutes – also passed shortly after Cabazon, on the same day as the Restoration Act – seemed plainly to adopt the same distinction between prohibitory and regulatory enactments.

The focus on the departure from the text necessary to accept the Pueblo’s argument was underscored by a remarkable digression near the end of Yang’s argument, in which Justice Samuel Alito, joined by Kagan, Justice Neil Gorsuch, and Justice Brett Kavanaugh, spent several minutes debating the best way to think about the so-called “Indian canon,” which calls for interpretation of statutes favorable to Native Americans. 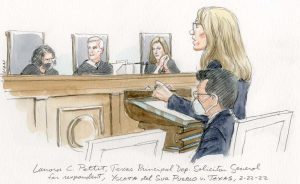 If the hand-wringing about textualism boded ill for the tribe, several lines of discussion arose late in the argument of Lanora Pettit (representing Texas) that seemed to presage acceptance, however grudging, of the Pueblo’s position. One involves the breadth of federal jurisdiction under the state’s position. The Restoration Act grants federal jurisdiction over disputes about the range of gambling permitted under that enactment. In the view of the Pueblo, the statute’s adoption of the Cabazon framework brings the Pueblo under the umbrella of the Indian Gaming Regulatory Act, which permits “prohibited” forms of gambling absent a compact between the tribe and the state. That statute governs the third tribe in Texas, as well as other casinos throughout the country. It has not produced any great flood of litigation or difficulty.

Kagan challenged Pettit about the jurisdictional problem, contending that “your position requires you to accept the idea that, for example, if Texas has a statute that says bingo has to end at 1 a.m. and instead it goes to 1:10, that all of a sudden that’s a federal crime adjudicable in federal court.” Rejecting the plausibility of that view, Kagan emphasized the plausibility of “the other side’s position … [that] federal courts are there when Texas has a statute that says no table games, and all of a sudden a casino opens up with craps.”

As the argument closed, Gorsuch seemed to join Kagan and Justice Sonia Sotomayor in embracing the Pueblo’s position. Kagan and Gorsuch seemed satisfied that the result under the Pueblo’s position would put the Pueblo under the Indian Gaming Regulatory Act, like other large casinos spread throughout the nation’s reservations, while the state’s position (in Sotomayor’s words) would “create a totally different system now.” Gorsuch seemed unpersuaded that the state could make a case for such a change without forcing a complete abandonment of Cabazon, something that the state disavowed during the argument.

There’s always room for doubt in cases involving Native American issues, but the balance of the discussion by the end of the argument seemed to tilt here toward the Pueblo.