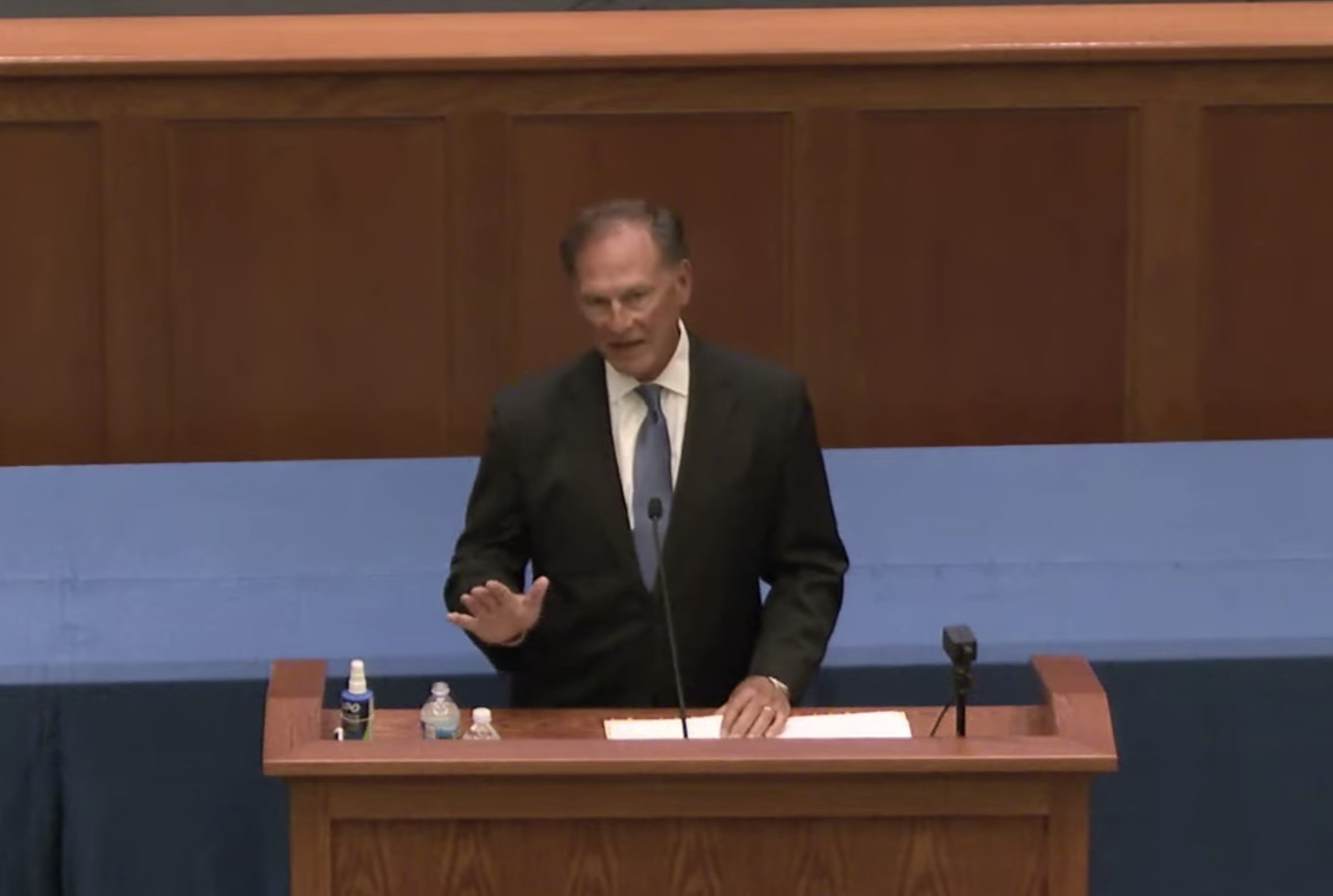 Justice Samuel Alito lambasted the media on Thursday for using the “sinister” term “shadow docket” to frame the court as “having been captured by a dangerous cabal that resorts to sneaky and improper methods to get its ways.”

He delivered the criticism in a livestreamed, hour-long speech at the University of Notre Dame deliberately titled, “The Emergency Docket.” His speech is the latest in a recent series of talks in which justices have complained about how the media covers the court, though Alito is the first to focus on the shadow docket.

University of Chicago law professor William Baude coined the term “shadow docket” in 2015 to refer to the orders that the court issues outside its formal process of hearing arguments, receiving extensive briefing, and issuing opinions that resolve the merits of a case. Many shadow-docket orders deal with expedited requests for emergency relief, and the court’s recent handling of such requests has drawn criticism from some legal experts, liberal commentators, and politicians. Alito’s remarks came just 24 hours after the Senate Judiciary Committee debated the topic.

Alito opened by saying that there is nothing new about the way the court handles emergency applications, save the fact that the internet now allows the justices to receive the parties’ papers immediately, access the full record in the courts below, and communicate with each other anywhere, anytime.

Notably, the same internet has also helped foster the recent criticisms of shadow docket. Alito picked 10 separate critiques and set out to “let in some sunshine and dispel some imaginary shadows.” He ticked through each one, sometimes citing the source, often revealing ample awareness of public discourse about the court.

He began by dismissing the “silliest, most annoying” criticism — which he described as the notion that the justices sometimes issue emergency decisions late at night to pull one over on reporters as they sleep. He said that late decisions are almost always because the court is working on a deadline. The Supreme Court recently issued its decision allowing a restrictive Texas abortion law to remain in effect at 11:58 p.m. — a full day after the deadline allowing the law to take effect.

Alito invoked the “novel and controversial” Texas abortion law several times during his speech. He attributed the court’s decision in the Texas case as the primary driver of recent criticism, along with a pair of decisions to block both the CDC’s revamped eviction moratorium and the Biden administration’s attempt to repeal the Trump-era “remain in Mexico” policy. Responding to commentators who accused the court of effectively nullifying Roe v. Wade without a hearing, Alito said the court “did no such thing.” He pointed to a line in the court’s single-paragraph, unsigned order: “This order is not based on any conclusion about the constitutionality of Texas’s law.”

He also mentioned that the abortion providers in Texas did not ask for oral argument in their emergency request seeking to block the law (though the providers have since returned to the court and asked for just that). Nor did the Biden administration when it asked the court “to rule within hours” on a stay of the remain-in-Mexico policy.

Addressing the concern that justices are not obliged to disclose how they vote on shadow-docket orders, Alito said that each justice is free to write or note a separate concurrence or dissent, but when a justice does not write separately, it is usually because she does not think it is important to do so. Even on its merits docket, Alito said, some justices throughout history have written “graveyard dissents” – dissents that circulated internally among the justices but are never publicized.

Alito also flatly denied the charge that the court has increasingly used the shadow docket to issue sweeping decisions that change the law in significant ways. He admitted that granting or denying applications for emergency relief has “important consequences.” But he said, “The suggestion that these emergency rulings definitively decide important issues is false.” Decisions for emergency relief, he continued, do not make precedent on the underlying issue. But shadow docket decisions do become precedent in related cases.

Alito closed by saying he did not mean to suggest that the current practice is perfect and that change should not be considered. He invited scholars and judges to suggest procedural change but said that media and political talk about the shadow docket is not “serious criticism.”

There was a brief, curated question-and-answer session at the end of his speech. Alito was asked how COVID-19 had changed the court. He lamented that “something was lost” because the justices did not have an opportunity to be in the same room together for over a year but praised the benefits of not having to wear a tie as often and shaving less.

While Alito was speaking, another emergency application reached the court. A group of New York City schoolteachers asked the court to block the city’s vaccine mandate for public school employees.