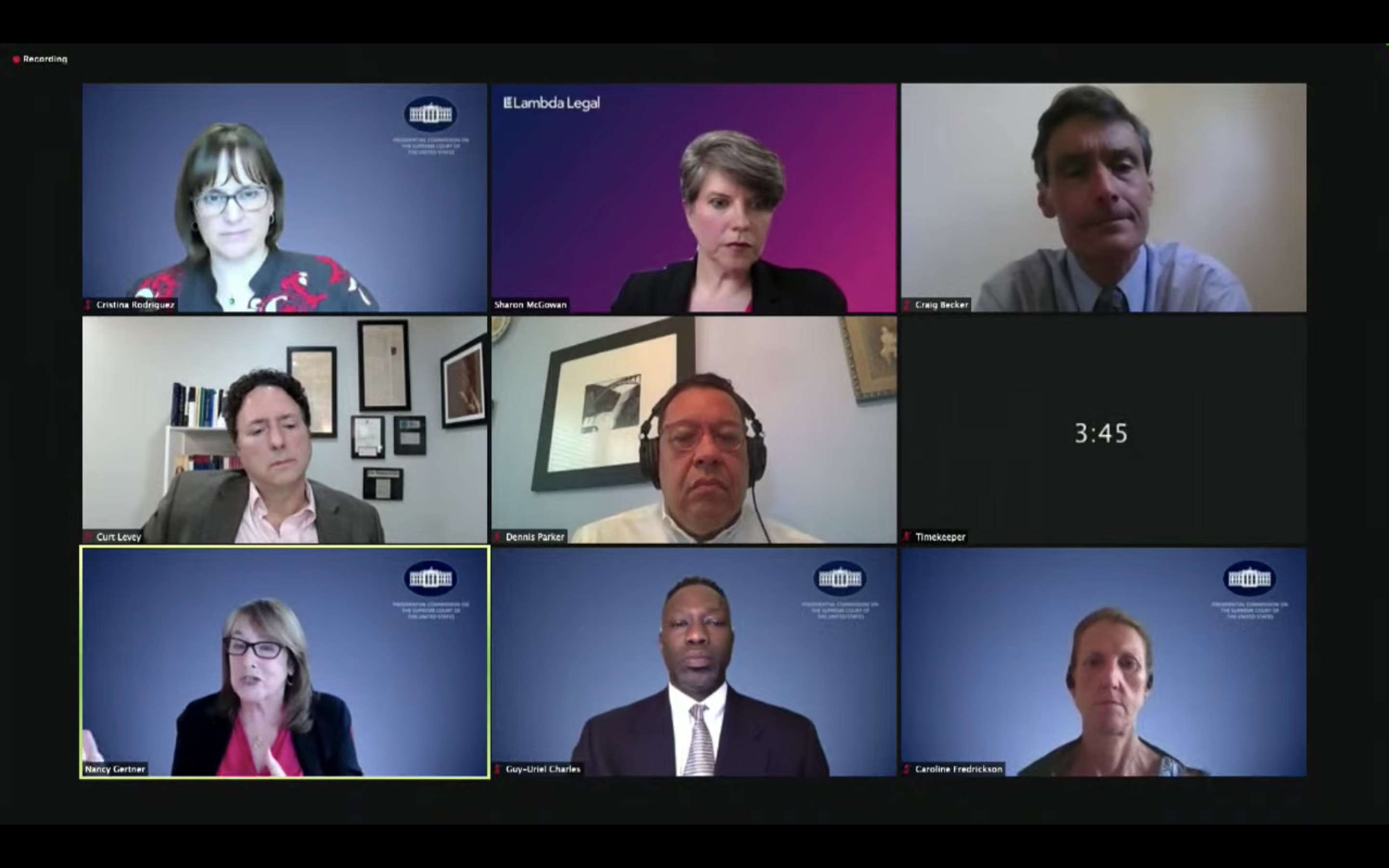 The Presidential Commission on the Supreme Court reconvened on Tuesday to hear from a new set of experts on various ideas for Supreme Court reform. Like the last meeting, various legal experts testified and answered questions from commissioners in a series of panels spread throughout the day. President Joe Biden appointed the 36-member commission to write a report on various court-reform options.

The key topics included the confirmation process, term limits, transparency and disclosure, expanding the size of the court, and the court’s role in a constitutional government. Emerging as the topic of greatest interest among panelists and commissioners alike was term limits, although there was also some interest, especially in earlier panels, for the adoption of a formal code of ethics for the justices.

The commissioners first heard from Kenneth Geller, a partner at Mayer Brown, and Maureen Mahoney, a partner at Latham & Watkins, who represented the views of a group of attorneys who practice regularly in front of the Supreme Court. In their view, most of the popular reform proposals are unnecessary, would be subject to constitutional challenge, or should be enacted by the court’s own internal processes, if at all. For instance, they view court-expansion proposals as representing an “escalation of the problem, not a solution.” But the group does support a constitutional amendment imposing 18-year term limits and allowing each sitting president to fill two seats per four-year term, although the group believes that term limits imposed by statute would pose constitutional issues.

Gabe Roth, executive director of Fix the Court, presented a different view. He said the political climate is ripe for various judicial reforms – including term limits, which his organization believes can be implemented by statute without running afoul of the Constitution. These and other reform efforts are currently “deeply popular,” he said, with 70% of people supporting permanent livestreaming of oral arguments and ending life tenure.

Turning to judicial confirmations, panelists and commissioners largely agreed that the confirmation process has been one of the driving forces in raising the political temperature in recent years and has created the perception of Supreme Court justices as partisan actors. Commissioner David Strauss, a professor at the University of Chicago Law School, mentioned that one thing he sees as an “unhealthy relationship” is that each nominee is given a “team” during Senate confirmation hearings. It is only natural, Strauss said, to get the feeling that the nominee’s partisan team is on their side and that the other side is the adversary. Panelist Jeff Peck, a managing partner at Tiber Creek Group, agreed with this sentiment and went on to explain that celebratory events following confirmation hearings also appear unseemly and give the impression that nominees are like clients of the White House who can be used as political tools for a particular administration.

Term limits emerged as the leading reform proposal, and the commissioners seemed interested in fine-tuning how they will treat that subject in their report to the president, which is due this fall. Commissioner Rick Pildes, a professor at New York University School of Law, commended the idea of term limits, mentioning that it seemed like there is “a great deal of support behind” it and that, although practitioners seem resistant to many ideas, most think term limits are acceptable.

Much of the panel discussions spent a great deal of time on how term limits could be implemented. One consideration is the specific duration. An 18-year term limit would mean a new justice every two years – or two appointments per presidency. Other potential timeframes include 12 or 16 years. But as Vicki Jackson, a professor of constitutional law at Harvard Law School, explained, 12 years may be too short and could allow a two-term president to appoint six of the nine justices.

Another consideration is the proper means of implementing term limits. Commissioners were interested in whether such a change could be effectuated by statute or whether a constitutional amendment would be necessary. Responses on this topic were mixed. While everyone agrees that a constitutional amendment would suffice, amendments are very difficult and would require wide bipartisan support. A statute, on the other hand, would be much easier to implement, but it could raise constitutional issues because Article III states that federal judges “shall hold their offices during good behavior.”

When asked about the feasibility of term limits established by statute, Jackson explained that a statute may not be “clearly unconstitutional,” but there are “significant counterarguments” against it. For instance, the independence of the justices could be harmed by the removal of life tenure. Other considerations include the proper timing around how and when to implement term limits in conjunction with sitting justices. And as Tom Ginsburg, a professor of international law and political science at the University of Chicago, explained, both the removal and the appointment must then be considered once life tenure is removed.

Commissioner Michal Waldman, the president of the Brennan Center for Justice, said it has been “striking for us as members of the commission” how widespread the support for term limits is across the political spectrum. Solutions presented by the introduction of term limits include less gamesmanship by justices in choosing their replacements, more predictability in turnover and appointment, as well as less of an incentive to appoint younger justices to ensure a longer foothold on the bench. As Margaret Marshall, the former chief justice of the Supreme Judicial Court of Massachusetts, put it, limited terms reduce the incentive to appoint younger judges for 40 to 50 years of service; however, she emphasized, “the linchpin is always a single lengthy tenure so that when a judge issues a decision, they do not find themselves out of a job the next go around.”

Recordings of the prior meetings and information on the panelists along with their corresponding written testimony can be found here. Public comments are posted here. The final three meetings are scheduled for Oct. 1, Oct. 15 and Nov. 10. The report will be submitted to Biden and made public on Nov. 14.