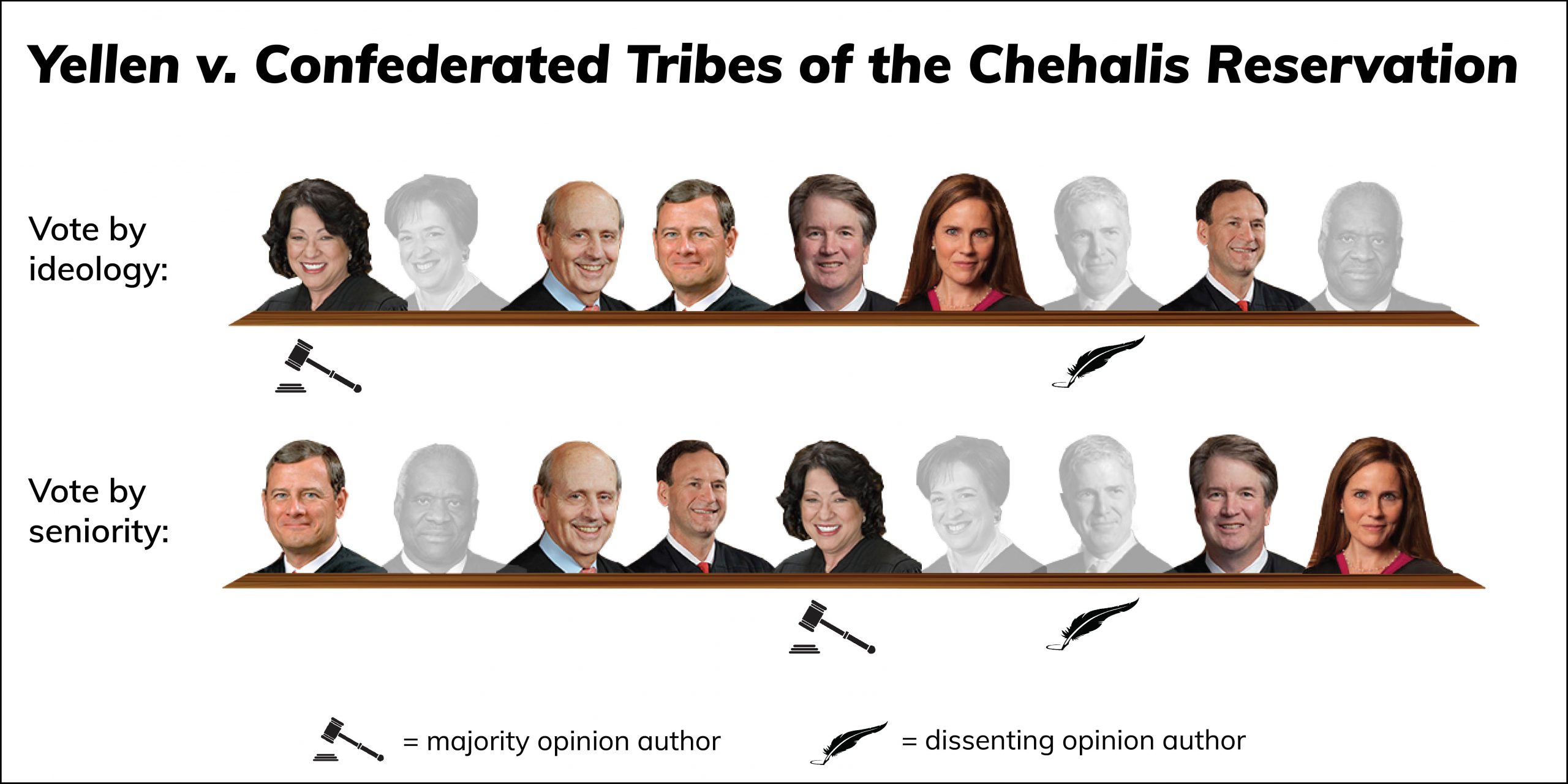 The Supreme Court on Friday ruled that Alaska Native corporations constitute “Indian tribes” under the Indian Self-Determination and Education Assistance Act, making them eligible for $500 million in federal coronavirus relief. Though the court focused almost exclusively on the statutory text, the decision will likely have broader implications for Alaska Natives.

The case, Yellen v. Confederated Tribes of the Chehalis Reservation, centered on the 2020 CARES Act, which set aside $8 billion in COVID-19 relief for “Indian tribes.” The act incorporated the definition of “Indian tribe” from the 1975 Indian Self-Determination and Education Assistance Act, which defined tribe as:

any Indian tribe, band, nation, or other organized group or community, including any Alaska Native village or regional or village corporation as defined in or established pursuant to the Alaska Native Claims Settlement Act, which is recognized as eligible for the special programs and services provided by the United States to Indians because of their status as Indians.

In implementing the CARES Act, the Treasury Department determined that this definition encompassed Alaska Native corporations, which are special Native-owned companies established in 1971 by ANCSA. A number of federally recognized tribes objected, arguing that the corporations are ineligible for funding. A unanimous D.C. Circuit panel sided with those tribes.

By a 6-3 vote, however, the Supreme Court disagreed and reversed, concluding that the Alaska Native corporations, commonly known as ANCs, did constitute tribes under ISDA. Justice Sonia Sotomayor wrote for the majority. Chief Justice John Roberts and Justices Stephen Breyer, Brett Kavanaugh, and Amy Coney Barrett joined all of Sotomayor’s opinion, while Justice Samuel Alito joined most of it.

Sotomayor reasoned that the ANCs are tribes under ISDA for two separate reasons.  First, she concluded, “recognized” should be given its ordinary meaning, rather than construed as a term of art for the formal government-to-government relationship between the United States and federally recognized tribes (which, everyone acknowledges, does not encompass the ANCs). To bolster this argument, she pointed toward a number of federal statutes, including Indian law statutes, that use the term “recognized” in this more capacious sense.  Under this “ordinary meaning” approach, Sotomayor reasoned, ANCs easily qualify as “recognized.” After all, ANCSA itself was one such “service” that the federal government provided to Native Americans because of their Native status.

But even if the court did apply a term-of-art construction to recognition, Sotomayor held that the “series-qualifier canon” — a rule of statutory interpretation that applies a limitation to all of the prior enumerated items on a list — should not apply. Here, she gave an example of equally inartful drafting, in which a restaurant advertised “50% off any meat, vegetable, or seafood dish, including ceviche, which is cooked.” Sotomayor suggested that a customer would correctly interpret this discount to encompass ceviche, even though the dish is made of raw fish or shellfish. “Like applying a ‘cooked’ requirement to ceviche,” she continued, “applying a ‘federally recognized’ requirement to ANCs is implausible in context.” She noted that it was unlikely — even in 1975 — that the federal government thought it would ever enter a government-to-government relationship with the ANCs, rendering their specific inclusion in the definition meaningless under the challengers’ reading.

Justice Neil Gorsuch dissented, joined by Justices Clarence Thomas and Elena Kagan. In his view, the term “recognized” is a formal term of art, as he pointed to statutes both before and after ISDA’s enactment that use virtually identical language to describe recognition. Moreover, he noted that it is not even clear under the majority’s test what the plain meaning of “recognized” is: “If ISDA really does capture any group merely ‘eligible’ for federal benefits,” he queried, “why not just say that and avoid introducing a term with a particular and well-established meaning in federal Indian law?”

Gorsuch was equally skeptical of the majority’s effort to avoid the series-qualifier canon.  In his view, the application of recognition to the ANCs is hardly implausible, pointing to considerable uncertainty in Alaskan history over the recognition status of various Alaska Native entities after ANCSA. Congress routinely includes illustrative examples in statutes, he noted, even when they might seem to be redundant. (In a playful footnote, Gorsuch also cited the food writer Mark Bittman to note ambiguity about whether ceviche might, in fact, be “cooked”). But in the end, Gorsuch noted, his disagreement with the majority was a “relatively modest” one: The entire court was adhering to textualism, he observed, even if it was divided on the proper outcome.

Largely lost amid the textualist debates was the decision’s practical effects. The majority specifically sought to limit these by crafting a narrow decision. The ruling, Sotomayor stated,  “does not open the door to other Indian groups that have not been federally recognized becoming Indian tribes under ISDA.” Moreover, even with respect to the ANCs, Sotomayor stressed that the result did not make the ANCs “Indian tribes” for the purposes of other statutes with different definitions. The decision, she stated, merely “affirms what the Federal Government has maintained for almost half a century.”

Yet a more accurate version of the status quo seems to have been ambiguity, given the considerable contradictory evidence of prior practice marshaled by both sides. Now, because of the court’s ruling, the ANCs are unambiguously “Indian tribes” under ISDA. Given the significance of federal-tribal contracting, especially in Alaska, this outcome, too, will likely have important effects that federally recognized tribes in Alaska, the ANCs, and the federal government will have to figure out.