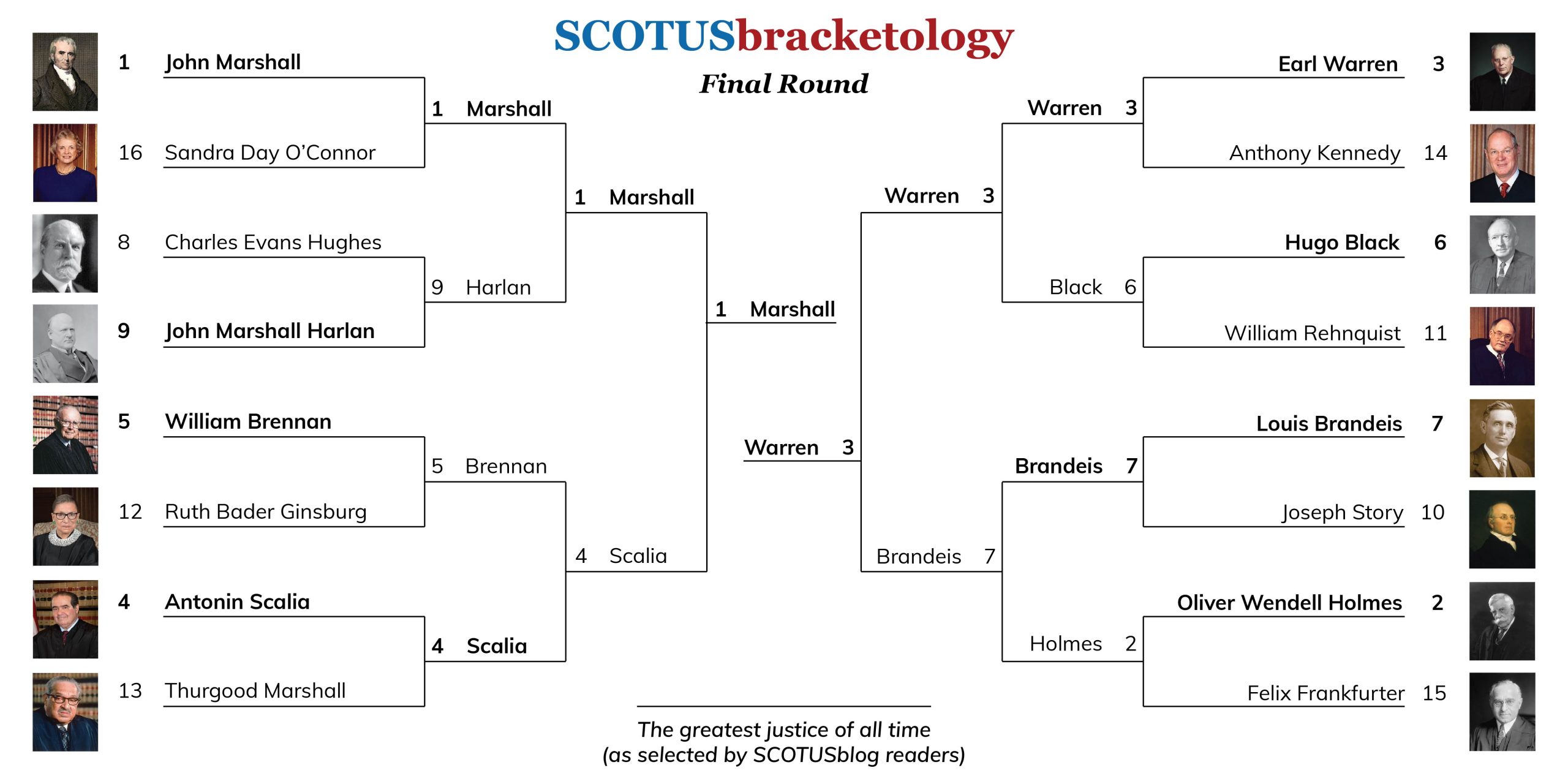 Forget Ali vs. Frazier, Celtics vs. Lakers, or Evert vs. Navratilova. It’s time for Marshall vs. Warren.

After three rounds of the first-ever SCOTUS bracketology tournament, only two justices remain. Both held the title of chief justice. Both reshaped American law and society. Both are legal titans who defeated a string of worthy contenders to reach the championship. But only one can be chosen by SCOTUSblog readers as the greatest justice in the court’s history.

To see how we got here, you can review the first-round results, the second-round results and the semifinals. We explained our original seeding and selection criteria here. Of course, no March Madness tournament is without controversy, and a few malcontents have sneered at ours. Too triumphalist? Lousy seeding? Skewed in a liberal direction? Skewed in a conservative direction? We heard those complaints and more. Our bracket even inspired a rival tournament with a slightly different agenda – an event premised on underachievement that no one should be proud of winning. Kind of like the NIT.

But enough with March Madness melodrama. This is the final round of the Big Dance, and it’s time to vote. Here’s the championship match-up.

Ask any constitutional law student to name the most iconic Supreme Court decision, and they’ll probably answer Marbury v. Madison. Ask the average American, and they’ll likely choose Brown v. Board of Education. Those two landmark rulings stand as the most celebrated decisions the court has ever issued. The former was written by John Marshall. The latter was written by Earl Warren.

In 1803 in Marbury, Marshall established the Supreme Court’s most significant power in our system of checks and balances: the principle that the court has the final say on what the Constitution means – and, by extension, the authority to invalidate unconstitutional actions of Congress and the president. As Marshall later wrote in McCulloch v. Maryland: “[W]e must never forget that it is a constitution we are expounding.” That may be the most important sentence the court has ever published. It articulates the principle that, while the political branches may be mercurial, the meaning of the nation’s highest law (as determined by the court itself) must remain a permanent safety net.

Over his 34 years as chief and 536 majority opinions, Marshall aggrandized not just the Supreme Court but also the power of the federal government. A lifelong Federalist who opposed the Jeffersonian conception of democracy, Marshall broadly interpreted the powers of Congress and declared the supremacy of federal law over state law. And as controversial as many of his rulings were at the time, the principles he articulated have gone largely unquestioned for two centuries. “Marshall found the Constitution paper; and he made it power,” President James Garfield wrote. “He found a skeleton, and he clothed it with flesh and blood.”

More than a century later, Earl Warren took the seat that Marshall once held. He served on the court for just 16 years, less than half of Marshall’s tenure. But his term was no less influential. During the 1950s and 1960s, the Warren court handed down a flurry of transformational decisions that expanded the rights of minorities, criminal defendants and the press. First among them was Warren’s 1954 opinion in Brown, which contains another candidate for the most important line in the court’s history: “Separate educational facilities are inherently unequal.”

The Warren court’s pronouncements – often issued in sweeping language reminiscent of Marshall – did not stop there. Its rulings on free speech (New York Times v. Sullivan and Tinker v. Des Moines), criminal procedure (Terry v. Ohio and Miranda v. Arizona), voting rights (Baker v. Carr and Reynolds v. Sims), privacy (Griswold v. Connecticut) and race (Brown and Loving v. Virginia) all laid the groundwork for modern jurisprudence in those areas. Warren did not write the majority opinion in all of those cases, but he was undoubtedly the court’s moral leader pushing his fellow justices to embrace broad change. As President Harry Truman put it: “The Warren record as Chief Justice has stamped him in the annals of history as the man who read and interpreted the Constitution in relation to its ultimate intent. He sensed the call of the times – and he rose to the call.”

It’s no surprise that, between these two finalists, one is known as the great chief and the other is known as the super chief. Which chief will earn the title? That’s now up to you. Due to technical issues with our internal polling system, voting for the final round will be conducted on Twitter. Voting will be open for 48 hours. Cast your vote here for the winner of SCOTUS bracketolology:

We've reached the final round of SCOTUS bracketology, and two illustrious chief justices are facing off for the championship. One wrote Marbury v. Madison. The other wrote Brown v. Board. Our full write-up on both finalists is here: https://t.co/P2su0LDf3P