A formidable Final Four: Marshall, Scalia, Warren and Brandeis vie for the title 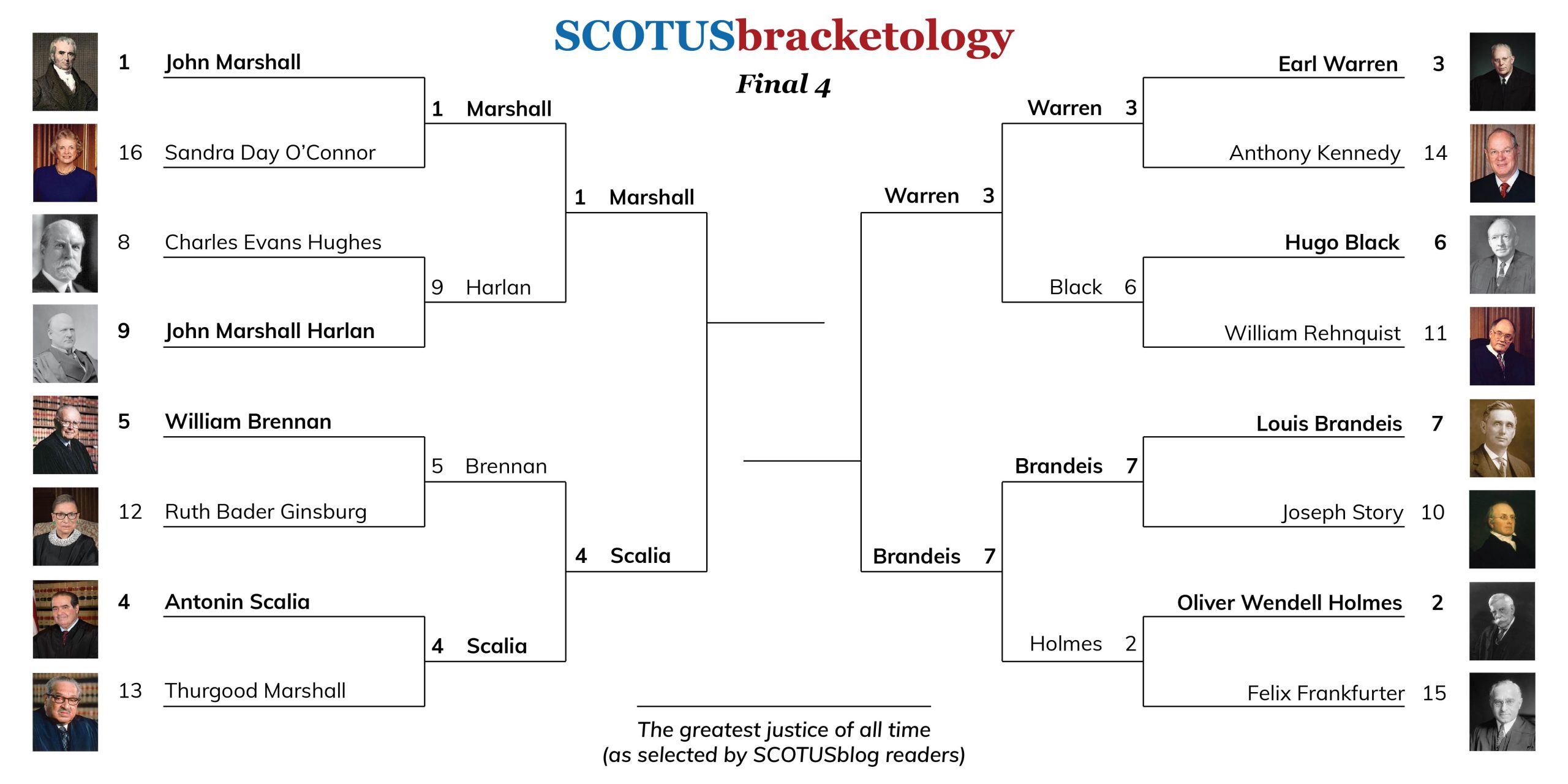 A liberal icon, a conservative icon, an early 19th-century pioneer, an early 20th-century luminary. One of those four contenders will be chosen by SCOTUSblog readers as the greatest Supreme Court justice.

This tenacious tetrad of justices (just enough to grant cert!) is an apt representation of 220 years of American jurisprudence. In their ideologies, their sensibilities and their historical eras, these four semifinalists are diverse in many ways – though the lack of racial and gender diversity also stands out as a sad reflection of the court’s history.

It’s up to you to determine who should advance to the championship. Voting for this round will remain open until midnight on Tuesday, April 6. And, as always, if you have thoughts on the Final Four or want to lobby for which justice deserves to be champion, shoot us an email. We may include some reader comments in the final round.

[Update: We are experiencing technical difficulties with our polling function. Voting is temporarily closed.]

“If the court has a Babe Ruth, it’s John Marshall,” the legal scholar Cass Sunstein wrote. In this tournament, Marshall is more like the 2020-21 Gonzaga Bulldogs. The overall No. 1 seed, he reached the Final Four with two breezy victories over Sandra Day O’Connor and John Marshall Harlan, and his highlight reel is impressive. In Marbury v. Madison, he established the Supreme Court’s power to declare acts of Congress unconstitutional. In McCulloch v. Maryland, he enlarged the power of the federal government in a young nation. In Gibbons v. Ogden, he clarified the authority of Congress to regulate interstate commerce. In Martin v. Hunter’s Lessee and Cohens v. Virginia, he confirmed the Supreme Court’s authority over state courts on federal issues. American constitutional law is built upon the framework established by these cases and others.

Antonin Scalia had a tougher road to get to this point – his matches against Thurgood Marshall and William Brennan both came down to the buzzer. But Scalia fans will argue that his impact on the court was just as significant as anyone’s. He joined the court in 1986 and, as Chief Justice John Roberts remarked in 2011, “the place has not been the same since.” Scalia advocated for an originalist reading of the Constitution, a textualist approach to statutory interpretation, and a rejection of unenumerated constitutional rights. His important opinions include District of Columbia v. Heller (declaring an individual right to own firearms), Crawford v. Washington (expanding the rights of criminal defendants to confront witnesses against them) and his legendary lone dissent in Morrison v. Olson (arguing against the Independent Counsel Act on separation-of-powers grounds). Since his 2016 death, Scalia’s judicial philosophy has in some ways become the default mode of interpretation, with newer justices sometimes sparring over who is best carrying the Scalia mantle. Even Elena Kagan said that, after Scalia, “we are all textualists now.”

Many of Scalia’s views, however, are just as likely to provoke outrage as admiration. In his dissent in Lawrence v. Texas, he argued that the court should uphold statutes that criminalize gay sex, and he consistently dissented in subsequent decisions providing equal rights to LGBTQ people. And he drew condemnation for suggesting, during a 2015 oral argument on affirmative action, that Black students should attend “a slower-track school where they will do well.” As with Marshall’s series of early-19th century opinions defending the institution of slavery, these views are unlikely to prevail in the court of history.

Earl Warren, who had easy victories over Anthony Kennedy and Hugo Black in the first two rounds, was the leader of the court during its most liberal era. He was such an outsized presence that he has been dubbed “super chief.” Warren was a politician first: a three-term governor of California and the vice-presidential running mate with Thomas Dewey in the 1948 election. But it was as chief justice that he made his biggest impact on American life. He started his tenure off with a bang, writing the court’s unanimous opinion in Brown v. Board of Education in his very first term. He followed that up with a spree of landmark rulings that have become fundamental to the modern American conception of justice: Loving v. Virginia (striking down bans on interracial marriage), Miranda v. Arizona (enshrining the “Miranda warnings” as required protections for criminal suspects) and Reynolds v. Sims (solidifying the principle of “one person, one vote”). Martin Luther King, Jr. once wrote to Warren to praise his “unswerving devotion to the sublime principles of our American democracy.”

Similar sentiments have been expressed about Louis Brandeis. According to one biographer, he was “a lifelong champion of an open libertarian democratic society.” But can this arguably under-seeded 7-seed become champion of SCOTUS bracketology? He narrowly defeated two behemoths – Joseph Story and Oliver Wendell Holmes – to get to the Final Four, but those victories were no flukes. In many ways, he helped modernize the law for the 20th century: He rejected the laissez-faire economic philosophy that most justices of his time adhered to; he laid the groundwork for privacy rights in his Olmstead v. United States dissent; he articulated a modern understanding of free speech in his Whitney v. California dissent; he voted to uphold New Deal legislation; and – perhaps to the chagrin of first-year civil procedure students everywhere – he wrote Erie Railroad v. Tompkins, creating the modern law of diversity jurisdiction in federal courts.

But as with the first match-up, the two contenders here are also subject to critique. Warren, despite his influence, was not known as a great writer or a brilliant legal mind (William Brennan was probably the top intellectual on the Warren court). And his critics see him as little more than a policymaker who openly disdained the idea of judicial restraint and molded the Constitution to fit his own conception of justice. Brandeis could similarly be accused of being a results-oriented justice, and several of his votes in key cases are major blemishes on his otherwise progressive record (in particular, voting with Holmes and seven other justices in Buck v. Bell to uphold compulsory sterilization for people with intellectual disabilities).